From Dublin to Lord's: The makings of Eoin Morgan 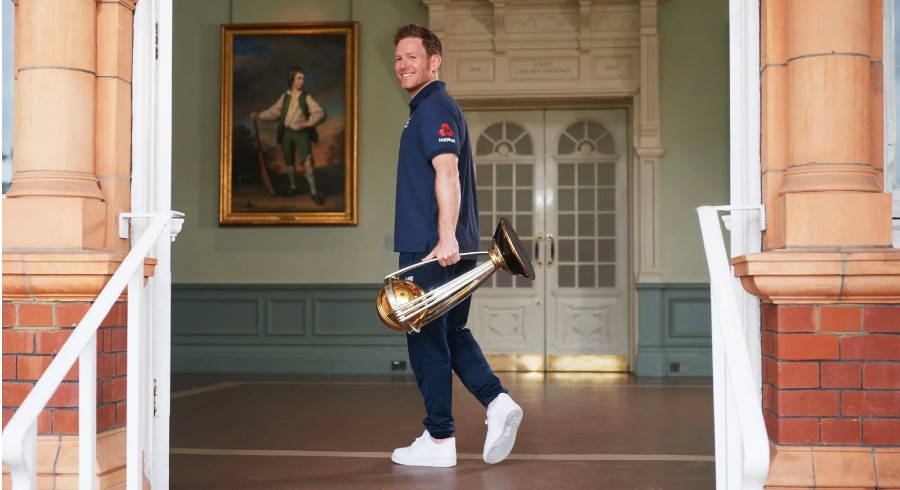 We take a look back at the transformation of Eoin Morgan's career, from his early days with Ireland all the way through to his match-winning heroics at the famous 2019 World Cup.

Hear the stories from the dressing room and go into the mind of CWC19-winning captain Eoin Morgan as he relives the excitement from the World Cup final!

1. Back where it all began for Ireland

Born in Dublin in 1986, Morgan was a standout for Ireland at the 2004 Under 19 Cricket World Cup as he scored 268 runs at an average of 38 and he backed that up at the 2006 event when he finished as the second leading run-scorer overall (338 runs) behind India star Cheteshwar Pujara.

Morgan failed to back that up at the 2007 World Cup in West Indies as he managed just 91 runs from nine hits while batting at No.3 for an Ireland side that managed to qualify for the Super Eights part of the tournament.

The left-hander was performing well at County level for Middlesex and a switch to play for England was always on the cards as Morgan changed allegiances in 2009 after helping Ireland qualify for the 2011 World Cup.

Morgan's first major tournament for England came at the 2010 T20 World Cup once again in the West Indies and it was a successful one for both him from an individual perspective and from his team's point of view.

A quickfire half-century against West Indies helped England make a winning start to the tournament and Morgan then scored a well-compiled 45 against the Irish as England booked their place in the Super Eights stage.

Kevin Pietersen was the star of the show from that point on, but Morgan's 183 runs at an average of 36.6 played a major part in helping England claim the title.

Morgan was becoming a mainstay in England's white-ball sides and was promoted to captain following the departure of Alastair Cook just two months prior to the 2015 World Cup in Australia and New Zealand.

Morgan's first major tournament as skipper was not a memorable one as England won just two matches and failed to make it out of the group stage of the 2015 World Cup.

It started terribly for Morgan, who was bamboozled by Mitch Marsh to be dismissed without scoring in England’s opening match of the tournament and things didn't get much better from that point on.

Morgan did manage 46 against Scotland in Christchurch, but another duck in England's crucial match against Bangladesh in Adelaide meant he finished the tournament with just 90 runs from five innings.

The new England white-ball captain found form later that year during the home series against New Zealand and Australia and continued to perform well in the lead-up to the 50-over World Cup on home soil in 2019.

4. Morgan the record-breaker stands up when needed at 2019 World Cup

The pressure was on England to perform well at home and Morgan knew he needed to step up with the bat.

He played a part with a steady half-century in England's opening match of the tournament against South Africa at The Oval, but it wasn't until their clash against Afghanistan at Old Trafford that the skipper stood out.

Morgan played the innings of his life as he broke a handful of records in amassing a superb 148 from just 71 deliveries.

His knock included 17 sixes - the most by any player in an ODI innings - while his century came from just 57 balls, the fastest by an England batter in a World Cup match.

Morgan didn't take pity on any of Afghanistan's bowlers, with champion spinner Rashid Khan not escaping his wrath as he conceded a whopping 110 runs from nine overs.

The innings set the scene for England and helped them on their way to what lay ahead in the thrilling World Cup final against New Zealand at Lord's.

5. Achieving the ultimate at the 2019 World Cup

Morgan may have failed with the bat in the epic World Cup title decider in 2019 - he scored just nine runs before Lockie Ferguson pulled in one of the best outfield catches of all time - but the England skipper played a pivotal role in the tactics that brought about their historic triumph.

After a thrilling 50-over match finished in a tie, Ben Stokes and Jos Buttler were entrusted to open the batting for England as the hosts put on a respectable score of 15 from their Super Over.

It was then left to Jofra Archer to defend that total with the ball and the inexperienced quick held his nerve to ensure the Kiwis failed to surpass the victory target and England were crowned World Cup winners by the virtue of hitting the most boundaries during the match.

Morgan was understandably emotional after the clash after he became the first person to lead England to a 50-over World Cup crown.

"This has been a four-year journey, we've developed a lot over those years, particularly the last two," he said after the nail-biting triumph.

It proved the pinnacle in what was an outstanding career for Morgan, who stepped down as England skipper and announced his retirement from the game on28 June in 2022 and almost 16 years after it all began as a teenager for Ireland against Scotland in Ayr.