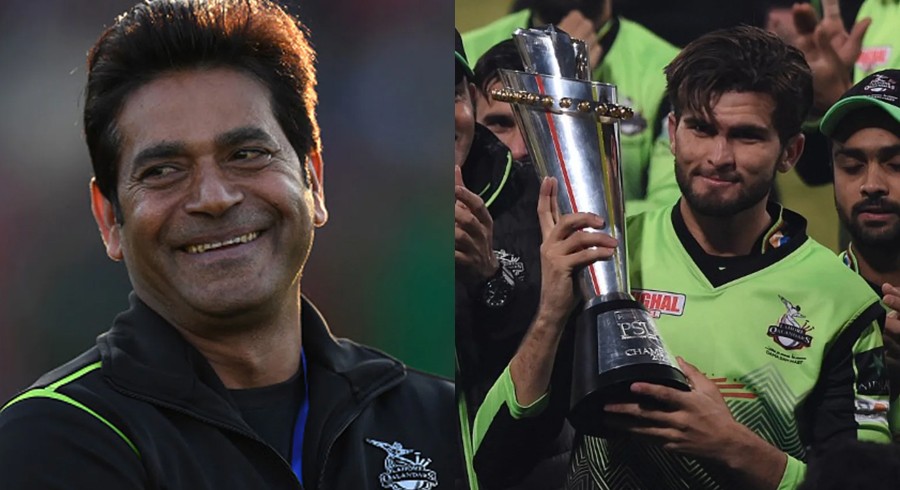 Lahore Qalandars won their maiden HBL Pakistan Super League (PSL) as they registered a comprehensive victory over Multan Sultans, who were arguably one of the most consistent sides of the tournament.

Shaheen Afridi led the Qalandars from the front but brought the HBL PSL 7 trophy to Aaqib Javed’s doorsteps and said, “this trophy is not ours; it is yours.”

The Qalandars head coach Aaqib Javed was in isolation and failed to help the team as he was tested for Covid-19 and missed the playoff matches along with the all-important final.

However, the franchise’s players along with management rallied to Aaqib’s hotel and handed him the trophy along with a bouquet of flowers.

Opening up about it in an exclusive interview with Cricket Pakistan, Aqib said that it was definitely an emotional moment for him and one which he will not forget.

“I was not expecting it but I don’t feel left out because the main thing was that Lahore won. I was delighted for Shaheen because there was a lot of talk about how he is too young to be a captain,” Aqib said.

Aaqib said that Qalandars’ campaign was no less than a fairy tale because their franchise had been struggling in the previous seasons.

“As they say, God is the greatest planner. We won the final in front of our home supporters and even if I wanted to, I could not have asked for a better story,” Aaqib added.

Aaqib Javed has been part of the Lahore Qalandars’ management since the early days and a lot of criticism was aimed towards him when the franchise was not performing well.

“I feel that in franchise cricket, the role of a coach is more of a manager. Sameen Rana’s involvement needs to be credited because we have been working together for six long years; sitting together for the draft, managing the team balance and sorting out all the problems,” said Aaqib.

“Personally, I believe that this trophy belongs to Sameen Rana after the players because at the crunch moment in the campaign I was isolated in a room because someone had to take decisions in the dugout during the games,” he added.

Aaqib played a crucial role in promoting Shaheen Afridi as the captain of the franchise with legendary players like Shahid Afridi opposing the idea due to Shaheen’s age.

However, the decision yielded instant results for the Qalandars’ as Shaheen’s performances throughout the campaign remained praiseworthy.

“Shaheen has natural leadership talent and this is something we figured out two years ago. This is why we promoted him as vice-captain. I personally don’t think that age has any factor when it comes to leadership,” he said.

“For a captain, it is important to be committed and honest; these two things are present in Shaheen in abundance. When we went to meet Imran Khan, I told him that Shaheen reminded me of his traits and I said that he will make us all proud,” added Aaqib.

"I am waiting for that time and the time will come soon," Aaqib opined on whether Shaheen will get Pakistan's captaincy in future.

Addressing the workload situation for international players, Aqib said that gone are the old days where you would have 2-3 practice matches before the series because the players are playing so regularly that they are always match fit.

“The players now are much different; be it mentally or physically. Shaheen is only 21 right now but the PCB has to manage these players once they grow a little older. For players like Shaheen and Haris, they capitalise on the rhythm and often face trouble once they take a break,” explained Javed.

Former Pakistan pacer further talked about their new trend which saw the HBL PSL trophy travel to players’ houses as part of Lahore Qalandars’ effort to maintain the “family” aspect.

“We have always claimed that Lahore Qalandars is like a family and once you make that claim, you have to uphold certain values. These players are like children to us and we do not do these things for social media, press, or anything,” Aaqib emphasized.

“It is always a proud moment for the parents when their children are appreciated like this. We had a lot of fun with Haris’ mother and Shaheen’s father has always liked Lahore Qalandars and has a special bond with the franchise. You cannot put a price tag on these things,” Aaqib added.