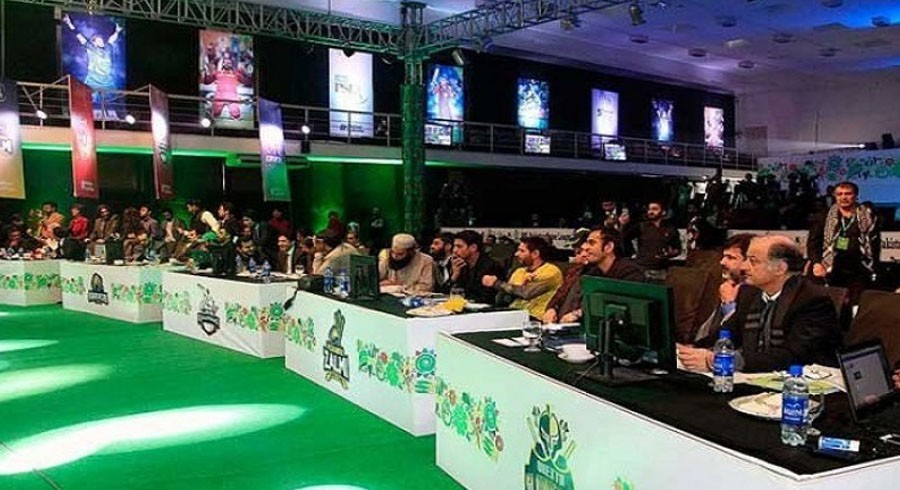 The fifth Pakistan Super League (PSL) draft took place in National Cricket Academy, Lahore, on Friday, December 6. What made this installment of the draft special was the fact that the teams were selecting players who were going to represent their franchise in what will be the first PSL to be entirely held in Pakistan.

The draft was the starter before this mega event, and there were some questions which had to be answered.

Chris Jordan. Last season, Karachi Kings’ main problem was poor death-bowling as they were consistently conceding a lot of runs in the last five overs.  Chris Jordan can be the missing link that helps the Kings defend targets in tough situations.

Tom Banton, who hails from England, by Peshawar Zalmi. He is a superstar in the making and will make a particularly destructive opening pair with veteran Pakistan wicketkeeper-batsman Kamran Akmal.

Anam Nadeem – ‘The writer is a sports presenter and tweets @anamnadeem’

Tom Banton! Peshawar Zalmi didn’t waste any time in picking this heera (diamond) in the ‘Diamond Category’. He was the second highest run-scorer (549 runs at a strike-rate of 161.47) in the Vitality Blast this year while representing Somerset. He also smacked 80 off 28 balls in Abu Dhabi T10 league not so long ago. Banton will surely give other batting heavyweights a run for their money. And well it’s not a bowlers world anymore anyways.

Colin Munro precisely because Islamabad United had three opening pairs last season. Luke Ronchi was the common thread but he was partnered by Rizwan Hussain — most likely to be deployed in the middle-order this season — then came in Sahibzada Farhan who has not been picked by the franchise this season and then the solution to the opening conundrum in Cameron Delport, who was released and snapped up by Karachi Kings.

Munro, who has the second most international T20 centuries, is an attacking batsman who could compliment Ronchi and provide Islamabad United a quick start in the powerplay overs.

NN: Peshawar Zalmi was already stacked with experienced T20 players that helped them qualify for 2019 PSL final. Addition of Shoaib Malik, Liam Livingstone and Tom Banton should strengthen them further in the upcoming season. They have match winners available in both departments (batting and bowling). If Zalmi’s senior players maintain last season’s form then they will have a very strong chance of lifting their second PSL trophy.

AZ: Islamabad United seem to have all bases covered. Genuine pace bowling, a wicket-taking spinner, explosive top-order and a solid middle-order that can bat deep, right into the tail.

Multan Sultans have also done a very fine job in building a squad this year, the likes of James Vince, Rilee Rossouw, Moeen Ali, Ravi Bopara, Khushdil Shah and Shahid Afridi make for a pretty complete batting unit. Their pace bowling is a bit lacklustre with Mohammad Irfan the only genuine quality pacer. Fielding will also be a concern with quite a few 'aging' players in their potential XI.

For me personally though, Peshawar Zalmi were the real winners of the draft. The team they have constructed looks extremely formidable from top to bottom, the addition of Banton, Livingstone & Malik really makes their batting look deep and rock solid. They only seem to be lacking a genuine top-quality spinner, but Liam Dawson is still fairly competent

AN: The 2019 champions Quetta Gladiators never fail to impress with their consistency and balance in the squad. This year is no different as they have a right mix of local and foreign players. The addition of Jason Roy will add more firepower in the batting department along with Shane Watson, Ahmed Shehzad and Umar Akmal. Sarfraz Ahmed will be hungry to prove his worth inorder to make a comeback in the national side. They have also included an emerging left-arm spinner Aarish Khan in the ranks to help Nawaz and Fawad Ahmed. But the icing on the cake are teenage pace sensations Naseem Shah and Mohammad Hasnain.

Peshawar Zalmi had good draft mainly cause of the core players they retained and all they had to do in the draft was to find filler players who would support the performances of the main players. Their pick of Banton also improves the side’s batting.

Like Zalmi, Islamabad United also had a good draft cause of their retentions, the thing about franchise T20 tournaments is that the best thing teams can do is have good quality local players, something which United ensured they had before the draft by retaining Faheem Ashraf, Asif Ali, Shadab Khan, Amad Butt, Rizwan Hussain, Musa Khan and Hussain Talat. All of whom have been good for their domestic sides in the T20 format, while retaining Luke Ronchi, whose unique skill set of an attacking wicketkeeping-batsman is rare. All United had to do in the draft was to fill in the gaps in their squads, which they did by using their picks to good effect.

NN: Lahore Qalandars retaining Salman Butt. Salman Butt does not have a future with Pakistan T20 team. At most, he can only hope of making a comeback in Pakistan Test Team. He has a well-documented issue of mediocre strike rate in T20 cricket. Furthermore, Lahore had already retained Fakhar Zaman, Mohammad Hafeez and Sohail Akhtar (all three of them can play as openers). Then, we saw in draft that Lahore Qalandars had Chris Lynn as their first pick who is also expected to play in the top order. It would have been better if Qalandars had picked a talented young batsman from domestic cricket circuit as their silver pick instead of Salman Butt.

AZ: Salman Butt being retained by Lahore was certainly a surprise, and made even less sense after they opted for Chris Lynn as their first pick. We've also seen their newly appointed captain Sohail Akhtar come out to open with Fakhar Zaman, and even Hafeez or Lendl Simmons can do the job if required. So having six potential openers in a squad of 18 is truly mind-boggling.

AN: There were quite a few, I won’t say surprise but rather bizarre picks/retentions. Sharjeel Khan, Salman Butt and Azam Khan easily make the cut. And the winner is, *Drums Rolls*, Sharjeel Khan. No cricket for him in the last two years due to suspension but Karachi Kings’ think tank have somehow restored faith in him. Will this be Sharjeel’s path to redemption?

CA: I have two answers.

Salman Butt, retaining him did not make any cricketing sense or logical sense. Butt is a below average T20 batsman, he does not have the game to score quick runs and if one is going to use him as an anchor, it would still be a poor choice. Lahore could have done better if they would have retained Haris Sohail, who has shown that he can hit the boundaries instead of Butt.

Azam Khan by Quetta, a look at his stats and his numbers are ridiculous to say the least. He has not been picked by any domestic side. He did not take part in the national T20 and he has just played the solitary PSL game.

NN: Best Batting Unit - Quetta Gladiators. Jason Roy is a bonafide match-winner in limited-overs cricket. Shane Watson was PSL 2019 Player of the tournament. Umar Akmal, Ahsan Ali and Ahmed Shehzad performed well in PSL 2019. Ben Cutting can provide impetus towards the end of innings. Gladiators’ bowling attack ain’t the best (on paper) but the batting will surely make them a strong title contender.

Best Bowling Unit - Islamabad United. If injuries don’t wreck their bowling combination then on paper, I think Islamabad has the best bowling attack. The induction of Dale Steyn is massive for them. Due to squad variety, Islamabad can play different combinations according to opposition and pitch conditions. There are question marks over Islamabad United’s batting unit but if the bowling unit brings their A game then there is a famous saying: “Batsmen win you matches but bowlers win you tournaments”.

AZ: Best Batting Unit - It is a close call between Islamabad and Quetta for who has the best batting lineup, Quetta may be just a hair's width in front since their top four are all proven performers in PSL.

Best Bowling Unit - The best bowling unit is an even tougher decision, all of the teams apart from Multan have formidable pace attacks, but only Islamabad have that ace spinner as well in Shadab Khan to make it a complete bowling side.

AN: Best Batting Unit - If I had to pick one for the sake of it I'd go with Peshawar Zalmi. Kamran Akmal and Tom Banton alone can run havoc on any opposition. Zalmi also have Umer Amin and Imamul Haq who can steady the ship and then the likes of Malik, Pollard and Sammy can finish off in style.

Best Bowling Unit - For Dale Steyn alone I’d say Islamabad United have assembled the best bowling unit. The excitement to see him play in Pakistan and for him to lock horns with Mohammad Hafeez *cough* bunny will be a sight for sore eyes. (If only he can remain injury free, *fingers crossed*).

Of course, United also have Starboy Shadab Khan, Faheem Ahsraf, who was the second highest wicket-taker last season (21 wickets at an average of 15.33), and the likes of Zafar Gohar, Rumman Raees, Hussain Talat, Ammad Butt and not to forget the livewire Musa Khan and Akif Javed! (another emerging left-arm pacer and one to look out for). United’s local bowling talent can prove to be more than handy.

What I can expect is high scores, if both of them perform well. But with such deep batting units and high quality, it’s going to take a lot from the bowling team to get them out of the game.

Best Bowling Unit - There are many choices in the best bowling unit category. You could think of Qalandars and their local pace bowling attack of Usman Shinwari, Shaheen Shah Afridi, Haris Rauf with Samit Patel and Sekugge Prasanna as your spinners. You could look at the spin heavy attack of Quetta. But the team which is the best bowling units are Peshawar Zalmi and Islamabad United.

If everything is perfect Islamabad United’s bowling attack would look like this Dale Steyn, Faheem Ashraf, Shadab Khan, Amad Butt, Hussain Talat, Colin Munro and emerging player Akif Javed. That’s seven bowling options in your playing 11, plus there is variety you can actually look forward to.

Peshawar Zalmi also have great potential in their bowling department. They possess Wahab Riaz and Hasan Ali (they are 2nd and 3rd on the PSL bowling averages list), they are well supported with Rahat Ali, have an able spinner in Liam Dawson but their cause of concern could be their emerging player but then Zalmi could even get some overs of Malik to cover for him.

With the PSL back in Pakistan there is a lot to look forward to for the fans, there will be more venues hosting games this time around with the added advantage of more international superstars playing in Pakistan. This is a truly momentous occasion for the league and it’s safe to say that cricket is truly back home.