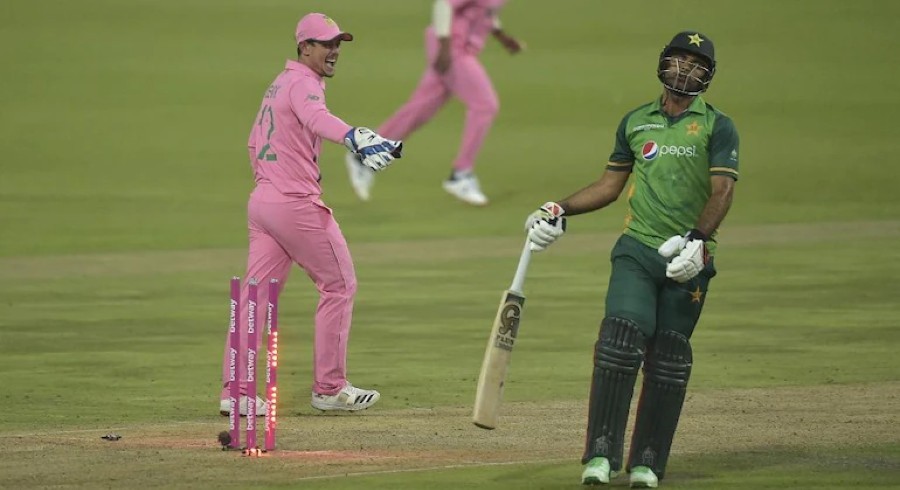 Pakistan needed 31 runs in the final over during the second ODI against South Africa. Even though the chances of chasing the total down were low, Fakhar Zaman was standing tall with an unbeaten score of 192 and could have delivered a miracle. Fans waited with bated breath for Fakhar’s double-century.

As the fans watched, Fakhar ran for two runs. He was about to complete the second run when he saw South Africa’s wicketkeeper Quinton de Kock, who pointed to the bowling end as if the ball had been thrown in that direction.  Fakhar relaxed, his concentration disturbed, the ball rattled into the stumps. This brought an end to a magnificent knock.

Today, the fans of cricket are very smart. They identified the wrongdoing of the Proteas’ wicketkeeper and stormed to social media to voice out their disapproval. If the rules had been followed in their entirety, Pakistan would have been awarded seven runs. Unfortunately, the umpires made a mistake and our management had no knowledge.

Team manager Mansoor Rana has been rewarded for his affiliation with the Director International Cricket Zakir Khan. Both represented the same department team in the past. In Pakistan cricket, friendship is more important than merit. If you see the officials and coaches in the National High Performance Centre, you will find individuals with very strong links.

It is quite normal for coaches or team managers to storm towards the match referee whenever an umpire makes a massive error. I am guessing our team management aren’t completely aware of the rule that if a batsman is deliberately distracted, the batting side is awarded five runs along with the runs scored on the delivery while the bowler is asked to bowl that delivery again.

I think someone informed the team manager of this rule a while later which is why he, Rana, went to the match referee. It is about communication as well. Maybe, if the team management had come out to discuss the matter with the umpires and reminded them of the rules, the outcome might have been reversed and Fakhar Zaman could have made his way to a much-deserved 200. They did not even submit a written complaint against Quinton de Kock. Now the wicketkeeper-batsman cannot be penalised or fined since 24 hours have passed since the incident.

This is our weakness, we let things pass too easily but when our own players do something they are quickly penalised or face bans. I am certain that if Mohammad Rizwan had done this, he would have been banned for at least one or two games. On the other hand, De Kock’s entire team stood with their teammate. Cricket was originally the gentlemen’s game but that is no longer the case. Players want to win at all costs.

Pakistan lost the match but Fakhar played one of the best ever knocks in the history of ODI cricket. He however is still criticised. What do his critics have to say after this splendid knock? If even one batsman had stood with Fakhar, Pakistan would have won the match. Pakistan has to work harder on its batting. Relying on just Babar Azam alone is not right. Asif Ali always comes back with hype but has yet to prove himself after 46 games. Iftikhar Ahmed received several chances before. It would have been better if they had just played Mohammad Hafeez, who is currently with the squad as part of the T20 side. Sarfaraz Ahmed as a specialist batsman could also have been tried.

Danish Aziz, who has performed well in domestic cricket, suffered against South Africa’s pacer Anrich Nortje. PCB has claimed the overhaul the domestic structure but the reality is different. The same pitches are present where batsmen score a mountain of runs and then struggle when faced with pitches that offer bounce. We need a system that exposes players to all kinds of pitches. Danish will have to perform in the third ODI if he gets the chance or else he will be kicked out and quickly forgotten.

Shaheen Shah Afridi and Mohammad Hasnain have not lived up to expectations so far in the series, while Faheem Ashraf’s performance has also been mediocre. Haris Rauf has performed well which is a good sign for Pakistan. Shadab Khan had a miserable tour, who will also miss the rest of the tour due to injury, and now we will have to see what Usman Qadir can do. The batting line-up of the Men in Green continues to be uncertain as was evident in the first ODI when an easy chase turned into a nail-biting encounter.

Many South African players have left for the IPL. There will never be a better opportunity to win a series in South Africa. We hope our team will not disappoint us during the remainder of the series.