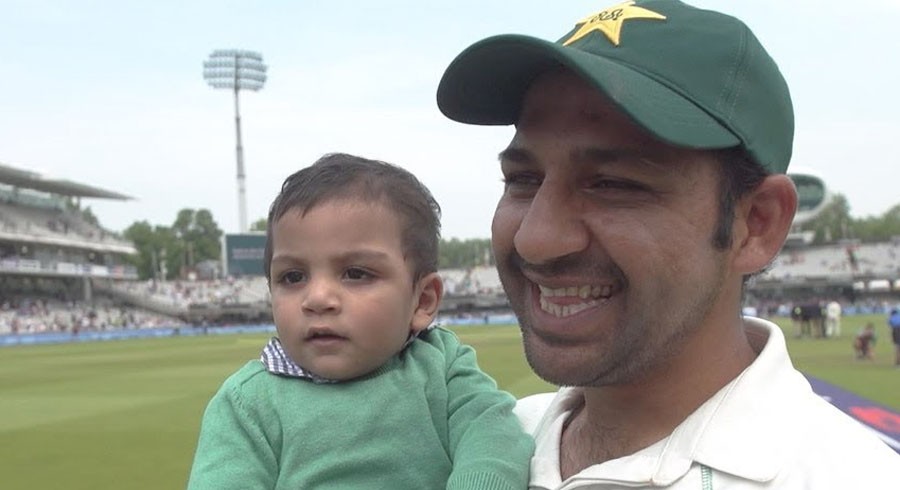 It feels like 20 years have passed since the time when hundreds of people gathered in a lane in Karachi’s Bufferzone area. The captain was seen lifting the Champions Trophy in the balcony of his house, while everyone chanted Pakistan Zindabad and Sarfaraz Zindabad slogans. Sarfaraz’s teacher, Azam Khan handed over Abdullah, his toddler son to him, who seemed disturbed due to noise upon which he was carried inside the house. How would a toddler know that his father had won a Champions Trophy for Pakistan and a crowd had gathered for its celebration?

Even today, the two and a half year old Abdullah must have no clue about was making his life miserable. He got agitated while being confined to the hotel room upon which Sarfraz took him to a shopping mall. He was crying there when a guy came and requested for a selfie. The captain stopped at the request made but later the guy began making fun of his physique and also passed derogatory remarks.

I can understand what Sarfaraz must have felt. Believe me, the guy would not have had been spared if it had been a cricketer like Shahid Afridi but Sarfaraz, being a man with cool-temperament, left silently, despite listening to everything.

A reaction from Sarfaraz would have had made headlines like: “Sarfaraz loses control, beats or scolds fans."  Anyways, that did not happen. The fever of making posts viral has been ruling over the minds of the users since the advent of social media, pushing people to do anything to achieve their objectives. This guy must had a similar desire, which he succeeded in fulfilling but this brought bad name to Pakistan globally.

Few days back, the very same Sarfaraz was speaking about David Warner and Steven Smith’s matter and had praised the fans saying that they won’t exhibit bad attitude by booing the Aussies.  Regrettably, he has now been proven wrong. All the Pakistanis including me are deeply saddened over Pakistan's defeat at the hands of India. Definitely, the team’s performance has not been up to the mark in the World Cup. The captain also made mistakes while his individual performance was also dissatisfying but it does not mean that we should make their lives miserable. Every one of us is entitled to criticize by finding cricketing flaws but we should spare families. Shoaib Malik and Sania Mirza were targeted, later slogans were chanted against Mickey Arthur and Imamul Haq in Townton. Babar Azam and Imamul Haq were harassed in other places and now, such an incident occurred with Sarfaraz. If you cannot accept a defeat so you do not have any right to celebrate the victories as well.

I am not supporting anyone. You can remove Sarfaraz as captain and also remove him for the squad but do not insult him. Regrettably, the Pakistan Cricket Board (PCB) has also observed silence. Such a thing happened with the players in England and no action was taken.  What will happen if a disgruntled fan physically hurts someone? Where are the security officers of the Pakistani team?

PCB should also take stern action. Though the harasser tendered an apology, still an example should be set. The British police via ICC should be approached for awarding punishment to him.

Few former cricketers are also involved in creating a hostile environment and used their respective Youtube channels to keep themselves active on mainstream media. There are no restrictions on social media, hence they say whatever they feel like saying.

Shoaib Akhtar is the most active among them. He has been targeting captain Sarfraz Ahmed and has introduced the culture of derogatory remarks. The former cricketer, maybe, has forgotten what he had done back in his playing days.

I don’t feel that our team will be able to make a comeback and reach the semi-final of the World Cup. No doubt, our players did not exhibit a good performance but there are several ways of registering a protest but not in the way Pakistani fans are reacting at the moment.