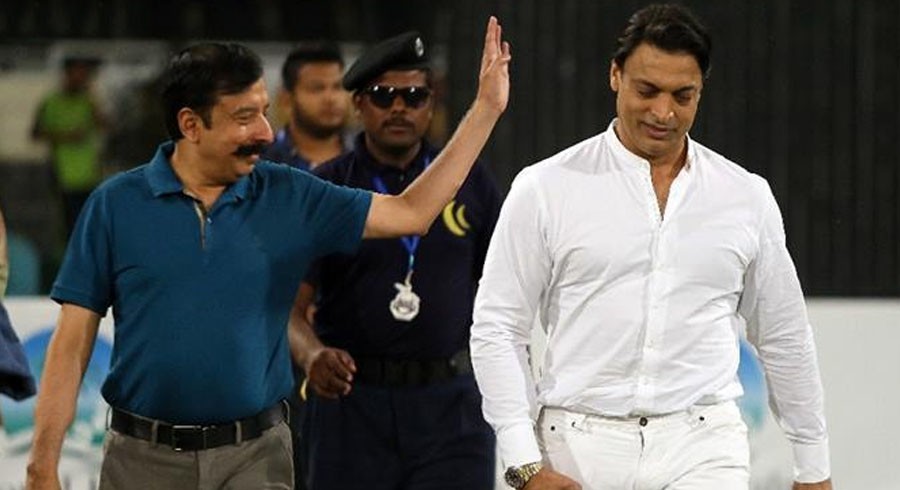 “Take this cheque and sign the documents. I want your hotel and want it at any cost,” said the influential man to the hotel owner.

“But I don’t want to sell it,” the hotel owner responded. “In that case, you will surely suffer greatly,” said the influential man as he stormed off.

I recently saw a Facebook clip from a movie that played out in this fashion. I immediately thought of Lahore Qalandars and Shoaib Akhtar. Despite Quetta Gladiators ending the last two seasons at the bottom of the points table or Islamabad United’s miserable run in PSL five, the Rawalpindi Express has never said that these franchises are incapable of running themselves. Neither has he asked for Islamabad United to be handed over to him so that it can be renamed Islamabad Express nor has he asked to replace Moin Khan as the coach for Quetta Gladiators to make it into the Quetta Express.

However, the former speedster’s heart seems to be set on Lahore Qalandars. PSL initially had five teams which were turned into six. Each owner has a different mindset and way of running their franchise. Most franchises sleep through the year, only to create hype on social media before the tournament. Because of this, most teams have been unable to develop into bigger brands despite winning the title. Everyone was baffled at how Lahore Qalandars seemed to be a prominent brand despite finishing at the bottom in every tournament in the start. Shoaib Akhtar too was affected by this phenomenon. He thought why wait for a seventh brand when I could try my hand at an established one. He got people to call the owner and even put offers on the table. The pacer had already thought of the name Lahore Express. When things did not go accordingly, the pacer went after the team and its owner through the media.

He probably thinks that the people in Lahore Qalandars will hand over their team eventually. Qalandars are happy with their side. If someone gives them love, they are willing to do anything and it is the same if they are crossed but in a negative way. There is no doubt that Lahore Qalandars has seriously disappointed their fans in the PSL 6. The many fans of Lahore Qalandars had been preparing for victory this season but the team for knocked out in the first round. Lahore Qalandars had been sitting at the top of the table while experts were thinking about the other three sides that might make it to the playoffs when all of a sudden, the entire scene changed for the worst.

Lahore Qalandars were beaten by Lahore Qalandars. The finalists of the PSL 5 returned to their losing ways in the sixth edition of the tournament, finishing fifth overall. If we look at what went wrong, then we can see that the batting department bears the brunt of the responsibility. When the tournament shifted from Karachi to Abu Dhabi, Lahore Qalandars beat Islamabad United and Peshawar Zalmi. Rashid Khan and other foreign players played an integral role in those victories. After that the side lost four consecutive matches. Quetta Gladiators, who had lost to almost everyone, won a match against Lahore Qalandars. The loss of form of Fakhar Zaman and Mohammad Hafeez, their important local players, hurt the side significantly. They played dot balls that impacted the rest of the batting lineup as well. Captain Sohail Akhtar could only manage 149 runs in 10 matches at an average of 14 in which an innings comprising of 40 runs was his most substantial effort. His role in the side is quickly becoming that of a non-playing captain. Ben Dunk could not replicate his heroic efforts of the past. Singapore’s Tim David had a great outing however youngsters such as Agha Salman and Zeeshan Ashraf disappointed greatly.

In the bowling department, the performances of Shaheen Shah, Rashid Khan and James Faulkner were great. There seems to be a growing arrogance in Shaheen Shah and Haris Rauf. Fast-bowlers need aggression but it needs to stay in certain limits. Haris’ bowling was not as eventful during this tournament. Youngster Ahmed Daniyal still needs a bit of time and hard work.

The good thing about Lahore Qalandars is that they promote young players. It should be noted that some youngsters couldn’t perform up to the mark despite having the necessary talent. Maybe they are being burdened by the bright lights of the stage and are not yet ready for the kind of pressure. Qalandars have made a world-class high-performance center where they will need to work on the psychological aspects of these youngsters as well. Everyone searches for a scapegoat in times of failure. They have an easy target in the form of Aqib Javed. There are talks about his removal going around. The same man was responsible for Lahore Qalandars rise to the final in the previous edition of the league.

I do not think that Lahore Qalandars will be willing to remove Aqib Javed because they have put their faith in him. Star cricketers in the side however will need to take responsibility and step up. All other teams have already won a title. The anger of Lahore Qalandars’ fans is completely valid. They need to step up and win the title for their fans or risk more scathing words from opportunists like Shoaib Akhtar.