Those who fear, end up on the losing side 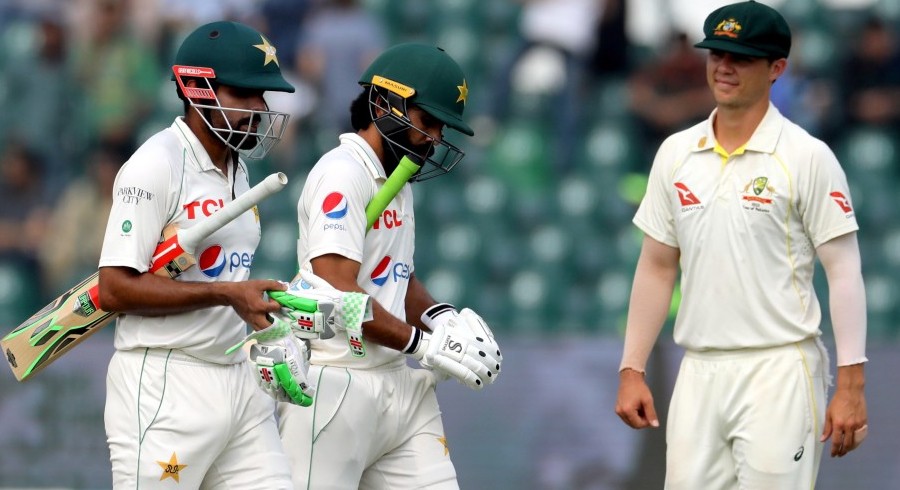 You must have seen a boxing match. In boxing, if any competitor keeps on defending himself and gives full opportunity to the opponent to attack him openly then eventually he will get knocked out. Although there is a huge difference between the two sports but over defensive mindset cause failure in cricket as well.

One has to fight to win. However, it is a shame that Pakistan failed to put up a fighting display against Australia as their rather conservative and defensive approach eventually backfired and resulted in a home series loss.

The Australian team visited Pakistan after 24 years. We were supposed to make this series memorable by playing outstanding cricket but the ordinary performance of Pakistani players made it memorable for the Kangaroos.

Who remembers the time when the iconic song would play "tum jeeto ya haaro, humien tum say pyaar hai" to back up the national team? That trend was established to honor the fighting spirit, the spirit that was non-existent during the Benaud-Qadir trophy from Pakistan's side.

In every home series, the hosts prepare the wickets keeping their strengths in mind. Teams like Bangladesh and Zimbabwe also defeat heavy opponents sometimes. Pakistan Cricket Board (PCB) seemed confused from the start. At one point, they say the pitches are not up to the mark, and we need to rehaul them. On the other hand, they produced such wickets where the possibility of results was next to impossible. It is fair to say that Pakistan has a fragile batting line, and keeping in mind that Australia has a formidable pace attack fast, bouncy tracks would have been a suicide mission. Although it's not possible in Pakistan, at least supporting wickets could be prepared that provide an equal contest between the bat and ball. We had to taste defeat due to the preparation of dead pitches at the request of the captain and coach.

Pakistan thought that they could win the toss every time and post a huge total in the first innings, and it happened in the Rawalpindi Test, but our bowlers couldn't stop the Australian batters from scoring big runs either.

But there was no luck with the toss in Karachi and Lahore. Pakistan barely escaped in the Karachi Test but suffered defeat in the third Test. The team management was overconfident about the top order batting line. That is why they preferred to play with five specialist batters and a wicket-keeper, only that left Pakistan with a long tail. The moment they lost five wickets, the chances of the collapse were imminent. Australia cleaned up the last five wickets for four runs in the first innings and managed to pick up the last five wickets for 22 runs in the second innings.

We had a list of fine all-rounders in the past, and now Faheem Ashraf is labeled as an all-rounder that shows where we stand now.

Nathan Lyon performed better than them as he took 12 wickets in three matches and took a five-wicket haul in the fourth innings of the Lahore Test.

The big question is why Zahid Mahmood was not given a chance. The mystery of Yasir Shah is also hard to understand. He himself claims that he is fit but other people's statements claim that he is out of form and still needs to regain fitness. This is where the role of Chief Selector Mohammad Wasim becomes even more questionable.

You can access from the white ball squad what Wasim is doing. He is unable to discover a proper allrounder and spinner and still experimenting.

It is still the case that when a weak team comes in which the stars are not involved, they beat them, and they get stuck against a strong opponent, the batters individually set records, but they could not give the team a victory, Abdullah Shafiq proved his mettle, he scored the most 397 runs, Babar Azam did not disappoint this time too.

Imam-ul-Haq also took full advantage of the opportunity. Azhar Ali and Mohammad Rizwan played a few good innings, but Fawad Alam's performance was disappointing, his technique against fast bowlers has started to be questioned, Babar Azam looks to be Pakistan's fully empowered captain after a long time,

In many important cases, head coach Saqlain Mushtaq's role is like that of a silent spectator. During the reign of Misbah-ul-Haq, the head coach was more important than the captain, he would have made most of the decisions, but the consultation was mostly done, now the situation has changed, and all the powers of the team are with captain Babar Azam.

He is prominent in most decisions, including the selection of a playing XI. Often the role of the head coach is like that of a silent spectator. When Saqlain was working in the interim, he was trying to bring out his good image so that players do not oppose him while taking permanent responsibility.

Now that he has become a permanent head coach, his style has not changed. He does not try to convince anyone. He has left most of the decisions to captain Babar Azam. Some players are not happy with this practice, and problems in selection have also started to occur. Saqlain has been a deputy or spin coach before.

Now that he has got a big responsibility, he has to prove himself similarly Babar has to become a powerful captain too. The next step is to deliver good performances in the limited-overs series against Australia. The Australian media has termed their bowling attack as the weakest in 50 years which should imply that Pakistan will do well and get rid of the bad taste after the Test series.