2021 in review: Year to remember for Pakistan cricket fans 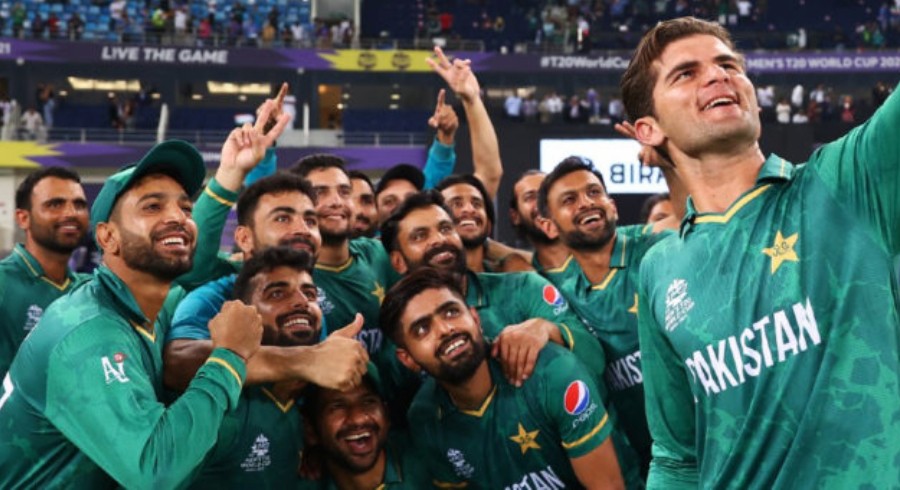 Pakistan enjoyed a steller 2021 as the cricket team, against all odds, prevailed in a stunning manner. Not only did Pakistan thrive under the new leadership of Babar Azam, but the team was also transformed into a complete unit led by the talisman himself.

From Mohammad Rizwan's rise to Babar Azam's brilliance to Pakistan's promising performances in the T20 World Cup, there was a lot to cheer for in 2021. Let us take a look at some of the 'winning' moments for Pakistan cricket as we bid 2021 a farewell.

The T20 format in 2021 unequivocally belonged to Pakistan’s wicketkeeper-batter; he started his year ranked outside of top-100 and ended it as the third-best batter in the shortest format of the game. In doing so, Rizwan broke several records and created new ones along the way. Rizwan became the first-ever player to cross the 2,000-run mark in T20s as well as the 1,000-run mark in T20 International cricket. In addition to that, Rizwan also holds the record for most boundaries (119) and most sixes smashed (42) in a calendar year. The right-handed batsman managed 12 half-centuries as he continued his impressive run alongside Babar Azam, who stood second in the list with 9. After only 55 matches, Rizwan has also equalled the record for most T20 player of the series awards for Pakistan. He's currently tied with Babar Azam and Mohammad Hafeez on four.

Did you know: Mohammad Rizwan has the most catches as a wicketkeeper (22) in 2021.

Babar Azam: Most runs as a T20I captain

After being appointed as captain, Babar Azam elevated his game to the next level. The batter managed to secure the top spot by year-end in not only T20Is but also in ODI format as well, previously only ever achieved by Australian legend Ricky Ponting. Babar had an impressive captaincy record in the longest format of the game as well, winning 7 of the 9 Test matches Pakistan played in 2021. Babar Azam, alongside Mohammad Rizwan, played 29 T20I matches which remain the joint-highest. The cover drive master Babar managed 939 runs in T20Is in a calendar year, second only to his opening partner Rizwan who led the charts with 1,326 runs. The Pakistan captain also smashed 9 half-centuries, which are second-most in 2021 by any player.

Did you know: Babar Azam is also the most successful outfielder as he hung on to 16 catches this year.

Opening the batting together, Babar and Rizwan have shattered records throughout the calendar year. The dynamic duo scored 1,380 runs together at an average of 57.50 in 25 innings, becoming the first pair to cross the 1,000-run mark. Both players together managed 6-century opening stands, surpassing KL Rahul and Rohit Sharma's record. Out of these six partnerships, four were in excess of 150 runs which came against England, India, South Africa, and the West Indies. Three-century opening stands came while Pakistan were chasing, most by any team while batting second as well. Their 152-run partnership in the T20 World Cup was also the highest opening stand in the history of the competition whereas both players individually also became the highest run-scorers in their debut T20 World Cup campaign.

Did you know: Babar and Rizwan hold the record for the fourth-highest T20I opening partnership (197), which they achieved against South Africa.

World record: Most T20I wins in a calendar year

With Rizwan and Babar leading the charge for Pakistan, the Men in Green delivered magnificent performances in T20Is. The Babar-led team registered 20 victories, most by any team in the history of the format, beating a record held by Pakistan themselves beforehand as well. In addition to that, Pakistan also surpassed all expectations during the T20 World Cup and reached the semi-finals of the tournament before being knocked out by eventual champions Australia.

Did you know: The previous record was also held by Pakistan with 17 victories back in 2017.

Whether it was comprehensively dismantling the opposition or clutching a win through the jaws of defeat; Pakistan delivered contrasting yet impressive performances throughout the T20 World Cup. The Men in Green won all five of their matches, the only team to do so in the tournament, which included their first-ever win against India in an ICC tournament. Pakistan were termed as the tournament's favorites as the competition progressed. However, Australia and Matthew Wade stood strong as they delivered a knockout blow to Pakistan in the semi-finals and secured a place in the finals.

Did you know: This was the first time Pakistan went unbeaten in the T20 World Cup group stages.

Pakistan enjoyed a successful run in Test cricket in 2021 where the team registered 7 victories in 8 matches. The Babar-led team registered victories against South Africa, Bangladesh, Zimbabwe, and also West Indies. Out of all the teams, Pakistan managed the highest win percentage in the calendar year with 87.5 percent. Pakistan will be desperate to replicate the same form next year when they come up against top-tier oppositions such as Australia, New Zealand, and England.

Did you know: Babar Azam currently holds the best win percentage as a Pakistan captain in Test cricket history.

Former Pakistan captain, Malik is one of the most sought out cricketers in T20 history. Shoaib Malik lifted his 14th career T20 title in his 461st T20 game as he helped Jaffna Kings beat Galle Gladiators in the final of the Lanka Premier League. The veteran all-rounder is now only two titles behind Dwayne Bravo, who leads the list with 16 trophies. Malik will be a part of Peshawar Zalmi's squad for the upcoming 7th campaign of PSL where he will look to win his 15th title.

Speaking further about Malik, the 39-year-old also broke the record for the quickest half-century for Pakistan in T20Is. The previous record was held by Umar Akmal who smashes a 21-ball fifty against Australia back in 2010. However, his record was finally broken by Malik during the T20 World Cup when Pakistan faced off against Scotland. Malik reached the 50-run mark in just 18 deliveries and eventually went unbeaten on 54 as the innings came to a close.

Did you know: Shoaib Malik holds the record for most T20I runs scored by a number five position batter with 1,055 runs.

Following the T20 World Cup campaign, Pakistan travelled to Bangladesh where the Men in Green were scheduled to play the T20I and Test series. The Test series saw the introduction of Sajid Khan, one of the most impressive spinners on the domestic level, showcase his true potential on the international stage. The spinner managed 8-42 in the first innings, which are the best figures from an offspinner hailing from Pakistan. In the second innings, Sajid managed to dismiss four more Bangladeshi batters and helped secure a famous victory for Pakistan. In doing so, he broke Saqlain Mushtaq's record of 8-164 which he had set against England in 2000. The best-ever bowling figures in Test cricket still belong to the late Abdul Qadir who secured 9-56 against England in 1987.

Did you know: Sajid Khan's 12-128 are the 7th best bowling figures for any Pakistani bowler.

Shaheen Afridi: One of the best

Pakistan came into the T20 World Cup as the underdogs after Misbah-ul-Haq and Waqar Younis both resigned and there were a lot of reservations regarding the squad, which saw changes days before the tournament started. The Men in Green faced India in their opening fixture, a team which they hadn't beaten in the previous 12 attempts in World Cup. The left-arm pacer, bowling first, set the tone not only for the match but for the entire tournament after he destroyed two of the best T20I batters; Rohit Sharma and KL Rahul. He later also picked up Virat Kohli's wicket. Pakistan ended breaking the curse and registered their first-ever victory against India in World Cup.

In addition to that, Shaheen's performances in Test cricket were commendable as he picked up 47 wickets with an average of 17.06 this year. The left-arm pacer remained the highest wicket-taker for Pakistan and second overall, followed by India's Ravi Ashwin who picked up 52 wickets.

Did you know: Shaheen is the second-ever Pakistani left-arm pacer to pick a 10-wicket haul in Test history