A peak into history of international cricket at Multan Cricket Stadium

Pakistan Cricket Board in Multan 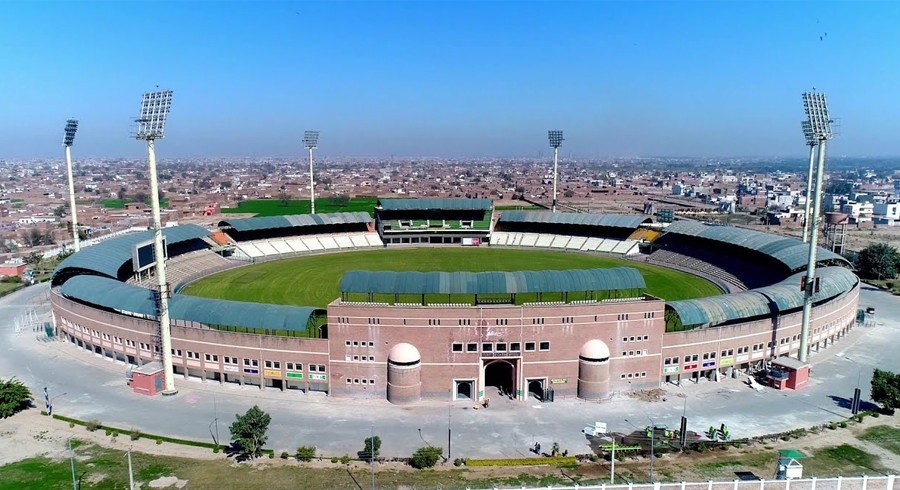 The international cricket will return to the City of Saints – Multan – after more than 14 years next week when Babar Azam’s side will lock horns with the West Indies in three ICC Men’s Cricket World Cup Super League matches at the Multan Cricket Stadium from Wednesday.

The MCS has been host to some memorable contests since it first staged an international match in 2001 when Pakistan defeated Bangladesh by an innings and 264 run in a Test that began on 29 August. The three ODIs between Pakistan and the West Indies promise to add more to the legacy of the iconic venue.

A peak into history of international cricket at Multan Cricket Stadium 🏟️

Pakistan arrived in Multan on Sunday and the West Indies will fly in on Monday for what promises to be an exciting and action-packed series with 30 points up for grabs.

When Nicholas Pooran leads his men out on the field on 8 June, it would mark the second instance of a West Indies side taking the field at the MCS in ODIs. The two sides last played at the MCS on 13 December 2006 with Marlon Samuels’ breezy 100 not out off 99 balls securing a seven-wicket win for the tourists.

The picturesque stadium has hosted seven ODIs with Pakistan winning four. In its inaugural ODI, Pakistan defeated Bangladesh by 137 runs in September 2003. The two sides also played the last ODI at the venue to-date, which the hosts won by seven wickets.

In the second ODI here on 30 September 2004, Pakistan had recorded the biggest win, in terms of runs, at the venue when they defeated Zimbabwe by 144 runs.

India and South Africa are the other two sides to have played here. Both came out victorious with India recording a five-wicket win in February 2006 and South Africa winning by seven wickets in October 2007.

Opener Yasir Hameed has scored the most runs at this venue, smashing 197 runs in four innings, followed by former Pakistan captain and local star Inzamam-ul-Haq (178).

Including Samuels, four batters have scored centuries at the MCS. The other three are Pakistan’s Abdul Razzaq and Yasir Hameed, and Bangladesh’s Shakib-ul-Hasan.

While spinners Shoaib Malik and Shahid Afridi, with six wickets each, have the most scalps in international 50-over contests at the MCS, India’s RP Sing – with four for 40 – has the best bowling figures for a fast bowler here.

The MCS has hosted five Tests from August 2001 till November 2006. Of the four Tests to have ended in results, Pakistan have won three.

Pakistan defeated Bangladesh twice in August 2001 and September 2003, and England in November 2005, while India have won the only Test to be played here between the two sides. The last Test at the stadium – between Pakistan and the West Indies – ended in a draw.

Pakistan batting coach, Mohammad Yousuf, has the most Test runs at the venue (517 at a staggering 86.16) and is the only batter to hit three centuries.

Virender Sehwag’s epic 309 in India’s win remains the highest score and the only tripe-century at the venue and Brian Lara (216 in 2006) has made the only double hundred at the MCS.

Danish Kaneria has spun the web around 22 batters in five innings at 20.13 runs per wicket. He has three five-fers and one match haul of 10 wickets.

The MCS, boasting a capacity of 25,000, is located off Vehari Road, in the suburbs of Multan. The stadium plays host to country’s top-level domestic cricket regularly.

The most recent high-profile cricket matches here were the three HBL Pakistan Super League matches in February 2020. Multan Sultans, the home side, won all the games, defeating Peshawar Zalmi (by six wickets), Karachi Kings (by 52 runs) and Quetta Gladiators (by 30 runs).