A T20I debut to remember for Naseem Shah

The nineteen-year-old was on song and breathing fire from the outset. Trusted with the new ball, Naseem produced an outstanding exhibition of pace bowling, which was precisely what Pakistan needed in the absence of Shaheen Afridi 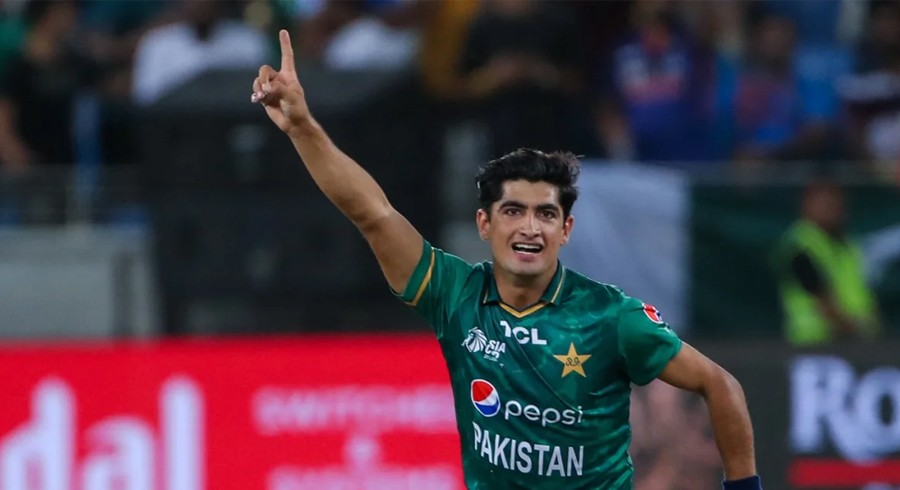 Before the tournament started, Pakistan were handed a bitter blow as their pace spearhead Shaheen Afridi was ruled out of the tournament. The responsibility of filling this gaping Shaheen-sized hole fell upon the shoulders of an inexperienced pace attack. And so as Naseem Shah and Shahnawaz Dahani were handed the charge to take the new ball, the focus was on whether they could fill the gaping Shaheen-sized void.

Teenage pacer Naseem Shah, on debut, got a chance and he took it. The nineteen-year-old was on song and breathing fire from the outset. Trusted with the new ball, Naseem produced an outstanding exhibition of pace bowling, which was precisely what Pakistan needed in the absence of Shaheen Afridi.

Continuing the form witnessed during the series against the Netherlands, his first over in T20 Internationals provided a quality glimpse of the sheer potential he possesses. He consistently operated in the high-140km/h range, moved the ball both ways and interspersed his fluid action with express pace and tight lines and lengths. It is worth mentioning that, when the then sixteen year old Naseem burst onto the international scene in November 2019, Australian journalist Andrew Faulkner likened Naseem’s approach and action to that of Hadlee, Lindwall and Waqar Younis.

He started by making a mess of KL Rahul's stumps on the second ball of the match, followed it up by a 145 kph away-swinger that elicited a thick edge from Virat Kohli's bat towards second slip that Fakhar Zaman couldn't hold on to, before finally ending the eventful over with a 141 kph out-seamer to Rohit Sharma.

After a successful spell with the new ball, Naseem returned for his second spell, when India needed 59 runs to win off 6 overs. His second spell began similarly to the way his first spell began. Like his first spell where he struck off the second ball by prising out KL Rahul, his second ball of the second spell clattered into Suryakumar Yadav's stumps, thereby wresting back the momentum and tipping the game's balance in Pakistan's favor.

Bowling at an express pace with the mercury hovering between 90° to 95° Fahrenheit, Dubai’s heat took a toll on Naseem in his last over. Visibly struggling and limping, Naseem was down with cramps in the heat of Dubai and couldn’t even muster the energy to appeal when his delivery hit Jadeja on his pads. Yet, Naseem squeezed every last drop of effort from his muscles to grimace his way through the pain of heat cramps to finish his quota of overs.

Although Pakistan failed to start their Asia Cup 2022 campaign on a winning note, there are times in sports when you admire somebody in defeat as much as you do in victory. Taking into account how superbly Naseem bowled and that he is only nineteen years of age, that somebody ought to be no one other than the teenage pace sensation Naseem Shah.