Multan, however, despite not hosting a Test match for 16 years, could provide more spin if recent domestic matches are anything to go by 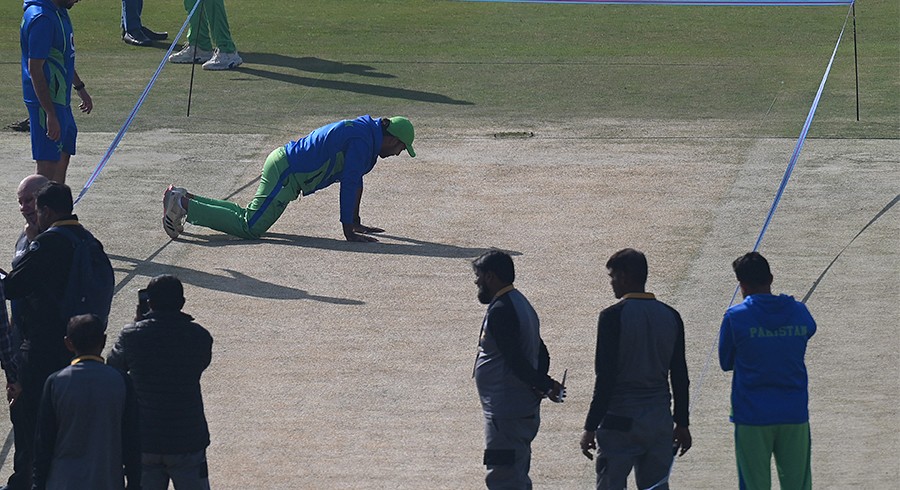 Pakistan hope to get more life from the pitch when they take on England in the second Test in Multan starting Friday.

England took full advantage of winning the toss -- and their batting depth -- to win the first Test by 74 runs Monday on a dead Rawalpindi wicket that offered nothing to the bowlers.

ALSO READ: "Where are we heading with this mindset?" Akhtar questions Pakistan's approach

Multan, however, despite not hosting a Test match for 16 years, could provide more spin if recent domestic matches are anything to go by.

Pakistan skipper Babar Azam, who scored a century in Pakistan's first innings in Rawalpindi, said he wanted something more lively.

"We wanted a spin pitch (in Rawalpindi)," he told reporters.

"I gave my input ... but unfortunately it was not what we planned."

Rawalpindi yielded 1,768 runs in four innings -- the third most in Test history -- with seven individual centuries and five 50s.

Still, leg-spinner Zahid Mahmood -- who conceded a whopping 319 runs for his six wickets in the first test -- may get the axe from the Pakistan selectors.

Mohammad Nawaz and the uncapped Abrar Ahmed are vying for his spot.

Fast bowler Hasan Ali will likely fill in for the injured Haris Rauf, himself a replacement for world-class pacer Shaheen Shah Afridi, who is out of the series.

England will also make an injury change, with wicketkeeper-batter Ben Foakes likely coming in for Liam Livingstone, who is heading home for treatment on his knee.

Regardless of the Multan surface, England skipper Ben Stokes has promised no end to "Bazball", the brand of aggressive cricket coined from the nickname of head coach Brendon McCullum.

"We're going to play to win every game," he said after Monday's win -- the seventh in eight Tests since the McCullum-Stokes partnership took over in May.

"It's not always going to work, but if you're brave enough and willing enough to go out and play in that way, if you lose a game, it's still going to be entertaining."

The weather could also be a factor.

Provincial authorities have issued a fog alert for the next few days, which could eat into playing time.