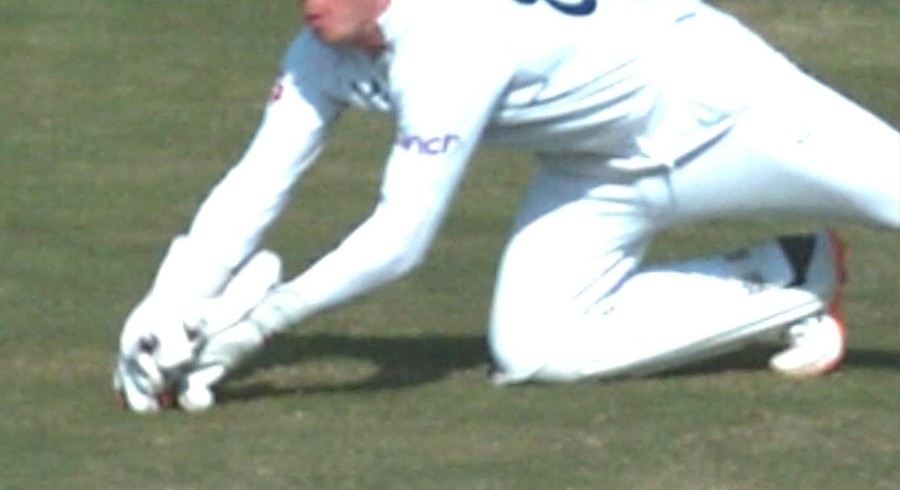 The ongoing second Pakistan-England Test saw many blunders by umpires. From decisions being overturned on many occasions to giving out on on-field calls despite having technology, this Test saw many.

Top names Marais Erasmus and Aleem Dar are the on-field umpires while Joel Wilson is the third umpire. The match is in the decisive phase and an umpiring error puts England on top to win the series in Pakistan.

In the last over before lunch, Saud Shakeel, batting on 94, tickled the ball to the keeper Ollie Pope. He dived low to his right and gobbles it up. Aleem signaled out as a soft signal. Wilson took time to confirm his decision and ultimately gave out.

The videos showed that some part of the ball was touching the grass. The Cricket fraternity are furious over the controversial decision and thinks that it must have been given, not out.

"I'm not sure what Joel Wilson saw in that but I feel that the ball was clearly touching the ground. There was nothing underneath it," Waqar Younis during the commentary.

"You could argue that the gloves were on the ball, not necessarily under the ball, and a bit of the ball was touching the grass," Mike Atherton said.

Ex-England captain Michael Vaughan also agreed that some part of the ball was on the ground.

Thought I saw a little bit of the ball hitting the ground with that last dismissal .. #PAKvENG .. What another great Test match .. 👍

Meanwhile, fans took a dig at the credibility of Joel Wilson, who they think was the only one who didn't see the ball touching the ground.

Is Joel Wilson the only person who didn't see the ball touch the ground there? #PAKvENG

That’s a terrible decision from Joel Wilson. Ball in the gloves but clearly touching the ground too. Take nothing away from Wood & Pope though who both did well. #PAKvENG #Cricket

Joel Wilson should never be allowed to umpire again🤬😤

Saud Shakeel not out. Umpire Joel Wilson should not be allowed to officiate in International cricket matches. @ICC #Cricket

Joel Wilson is one of the worst umpires on field as well as on TV. 35% of his decisions have been overturned on DRS - the worst percentage for any umpire in Tests. #PAKvENG