Following victories by Northern, Khyber Pakhtunkhwa and Central Punjab, their maiden of the season, in the sixth round, the points table has underwent a revamp of sorts 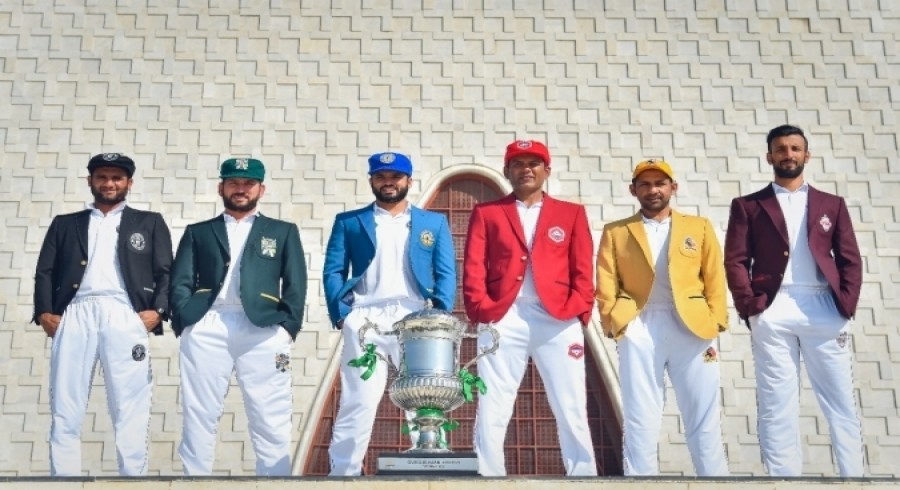 The battle for the top two spots on the six-team points table, which will secure berths in the final, continues to heat up as the first-class Quaid-e-Azam Trophy enters its business end with the tournament’s seventh round starting from Tuesday.

Following victories by Northern, Khyber Pakhtunkhwa and Central Punjab, their maiden of the season, in the sixth round, the points table has underwent a revamp of sorts.

Southern Punjab, who had been the leaders since the start of the season, slipped to third spot following a six-wicket defeat against Northern, who are now the top-ranked side.

Khyber Pakhtunkhwa thrashed Balochistan, ranked fourth, by 175 runs to gather as many as 25 points and jump to the second spot. They are only six points away from the table-toppers.

It took six matches for Central Punjab, the title defenders, to record their first win of the ongoing season. But, now they have tasted a win, the Hasan Ali-led team will be hoping that it leads to a much-desired resurgence. They secured 24 points from their commanding 227-run victory against Sindh.

Central Punjab remain at the bottom of the points table, however, they have shrunk their points difference with the next best team, Sindh, to nine points.

The finalists of the last edition of the first-class Quaid-e-Azam Trophy will face off for the second and last time in the group stage.

Northern captain Nauman Ali led his side to a comprehensive nine-wicket win when these two teams met in the second round of the ongoing tournament. The left-arm orthodox took 11 wickets in the match, with seven of them coming in the second innings.

Central Punjab will be wary of the 34-year-old as his form has picked up since that contest. Nauman is back on top of the chart for the highest wicket-takers in the tournament with 43 scalps and has as many as four five-wicket hauls from six matches.

Hammad Azam, Umar Amin and Mohammad Nawaz provide the strength and stability to Northern’s middle-order. The three are the third, fifth and sixth best batsmen in the tournament to date in the same order.

Central Punjab are yet to find rhythm in their batting as despite the completion of six matches, none of their batsmen has hit a century in the season. However, a blistering half-century by Ahmed Safi Abdullah in their second innings against Sindh and a half-century by their captain Hasan Ali in the fifth round fixture will have Northern cautious about Central Punjab’s batting depth.

Eyes will be on Waqas Maqsood once again after he took nine wickets in the victory against Sindh, which included a first inning haul of six for 25. The left-arm pacer is leading the fast bowlers’ chart for the most wickets with 26 dismissals at 20.54 runs per wicket and is the fourth best bowler in the season.

Ahmed Safi has had an impressive season as his left-arm orthodox has garnered him 22 wickets, which place him on the fifth spot of the highest wicket-takers’ list.

That Hasan has taken eight wickets in the two matches since his return to the side is another positive for their bowling department.

The two teams enter the contest, which will be broadcast on PTV Sports in Pakistan and beamed across the globe through PCB’s YouTube channel, at the back of heavy defeats, which must have sent them back to the drawing board in the two-day gap.

For the first time in the season, Southern Punjab have been dislodged from the top-spot and they will be eager to gather maximum points from this contest. After all, they defeated Balochistan by four wickets when these two teams met earlier in the tournament.

Balochistan have pocketed only 14 points from their last two matches and since winning their tournament opener – which remains their only win in the season to date – they have drawn three matches and lost two.

The last time Balochistan’s Imran Farhat made a notable score this season was against this very opposition when he scored a brilliant first innings century and the 39-year-old would be looking forward to an opportunity to be back amongst the run-getters if he features in the playing XI.

Balochistan will be pinning their hopes on 37-year-old Akbar-ur-Rehman, who has scored 387 runs at 48.38 and hit a century and two half-centuries in the tournament so far.

Ali Waqas has been another solid batsman with three half-centuries from four matches as the left-handed batsman has gathered 345 runs in the tournament at an average of just a shade under 50.

Their pacers Taj Wali and Khurram Shehzad have enjoyed success as they have taken 20 and 18 wickets respectively. Both bowlers have recorded a five-wicket haul each in the tournament. Taj is placed sixth on the highest wicket-takers list for the tournament and Khurram is at eighth.

Southern Punjab’s Zahid Mehmood has played a vital role in his side’s success throughout the season as the leg-spinner has taken 37 wickets at an average of 22.95. The 33-year-old Dadu-born has two five-wicket hauls in the tournament and is the only bowler from his side to be amongst the top 10 wicket-takers in the tournament.

Salman Ali Agha has been a revelation with the bat as the middle-order batsman continues to score runs. He has the most runs in the tournament as he has accumulated 600 runs at a staggering average of 75, which is the highest amongst the top-five run-getters in the season.

The 27-year-old has smashed a century and four half-centuries in the first six rounds and his captain Umar Siddiq will be hoping that his run of form continues as Salman scored 97 and 42 not out when these two sides met earlier.

Umar, himself, has been the other notable run-getter for Southern Punjab with 469 runs from six matches, which include four half-centuries. The 28-year-old wicketkeeper-batsman is the seventh best run-getter this season.

Khyber Pakhtunkhwa enter the contest with an astounding 175-run win against Balochistan and are one of the two sides – other being Northern – to have won three out of six matches.

Their victory was built around impressive first innings century from Kamran Ghulam and a remarkable display of pace bowling from the trio of Sameen Gul, Irfanullah Shah and Mohammad Wasim Jnr.

That Kamran’s 153 came in an innings in which the next best score was 58 and the team posted 320 all out augurs well for Khyber Pakhtunkhwa batting department as the middle-order batsman has picked up form in the most crucial stage of the tournament.

He is the latest batsman to be amongst run-getters after openers Israrullah and Musadiq Ahmed, Adil Amin and Khalid Usman.

For the most part of the tournament, Sajid Khan, the off-spinner, has carried the weight of Khyber Pakhtunkhwa’s bowling. His impressive form has seen him placed at the second spot in the list of highest wicket-takers with 38 scalps – which include three five-wicket hauls.

Following an outstanding outing in the sixth round, he looks all set to receive the much-desired support from the pacers.

Sindh find themselves placed fifth and only nine points ahead of the bottom-placed Central Punjab. The Asad Shafiq-led side will be eager to rack up maximum points from this contest.

Sharjeel Khan scored a fighting second innings 89 in the last match and Sindh will be hoping that the left-handed opener provides them solid starts following which Saud Shakeel, the second best batsman in the tournament with 588 runs at 53.45, Omair Bin Yousuf (382 runs, two centuries) and Asad (370 runs, one century and one half-century).

Following their promotions to the First XI side, pacer Shahnawaz Dhani and leg-spinner Abrar Ahmed have made a mark with their impressive performances. Shahnawaz has taken 12 wickets in three matches, while Abrar has dimissed 13 batsmen in as many matches.

Tabish Khan continues to be a daunting proposition for the batsmen. The 36-year-old pacer has 19 wickets from six matches and Asad will rely on his to provide crucial breakthroughs.