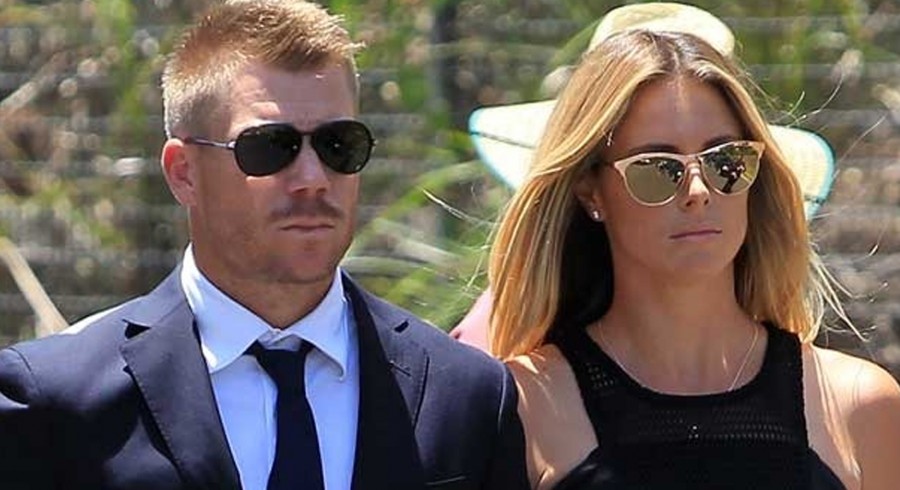 David Warner said wife Candice had been his "rock" and the driving force behind his return to Australia duty after the opener scored his first international century since a ball-tampering ban during a World Cup win over Pakistan.

The opener made 107, his first hundred in Australia colours since an Ashes century against England during the 2017 Boxing Day Test at Melbourne, as the World Cup champions won by 41 runs at Taunton on Wednesday.

Both Warner and former captain Steve Smith were given 12-month bans by Cricket Australia following their roles in a ball-tampering scandal in South Africa.

"I was always coming back to international cricket if selected," Warner told reporters after stumps in his first major press conference since his suspension expired. “The thing that kept me going was my wife and kids.”

"My wife is just, she's just my rock. She's unbelievable. She's determined, disciplined, selfless," the 32-year-old left-hander added. "She's a strong woman. And she got me out of bed a lot in those sort of first sort of 12 weeks, and got me back running and training hard as I could... She really nailed that into me."

Candice Warner, who is pregnant with the couple's third child, is now in England.

Australia, whose next match is against Sri Lanka at the Oval on Saturday, now have an official period of 'family time' starting Thursday when players can see their wives and families.

"We're fortunate enough to have our families away with us which is great and obviously we're going to be here for a while in the UK," said Warner, set for a long stay given Australia remain in England for an Ashes series after the World Cup.

While Smith and Cameron Bancroft, who received a nine-month ban for applying sandpaper to the ball during a Test at Cape Town, gave interviews during their suspensions, Warner maintained his silence following an emotional press conference at Sydney Airport after he was sent home from the tour.

"I didn't need to say anything," explained Warner, reported to be the instigator of the ball-tampering incident. "What was said was said back in those press conferences. And now it's about looking forward."

Warner's century was also his third fifty in four innings this World Cup after scores of 89 not out against Afghanistan and an uncharacteristically slow 56 off 84 balls in a defeat by India last time out.

"Personally, it's a great thing," said Warner of his hundred. "It was a long time coming. Against Afghanistan I felt like I had no rhythm.

"And still last game they (India) bowled really straight to me. But to come out here, play the way I know I can play was awesome," explained Warner, who faced just 111 balls at Taunton.

Warner and Australia captain Aaron Finch (82) shared an opening stand of 146 — the highest partnership for any wicket of this World Cup so far.

But they had to see off a testing opening spell from Pakistan left-arm quick Mohammad Amir, who finished with career-best figures of 5-30.

"He's a world-class bowler," said Warner. "When he's swinging it, it's very difficult to try to get on top of him. I tried my best to see him off but still try and rotate the strike."

Pakistan fans in Taunton largely heeded a pre-match plea from captain Sarfaraz Ahmed not to boo Smith and Warner — indeed many of them cheered and clapped Warner after he was out.

This was in marked contrast to the crowd taunts that had come Warner's way in previous World Cup games, with further jeers expected during the Ashes.

"The boos, we don't really hear that when we're out there... It's water off a duck's back," Warner insisted. "I've heard it my whole career. "Actually it eggs us on a lot and makes us knuckle down and try to score more runs if anything."