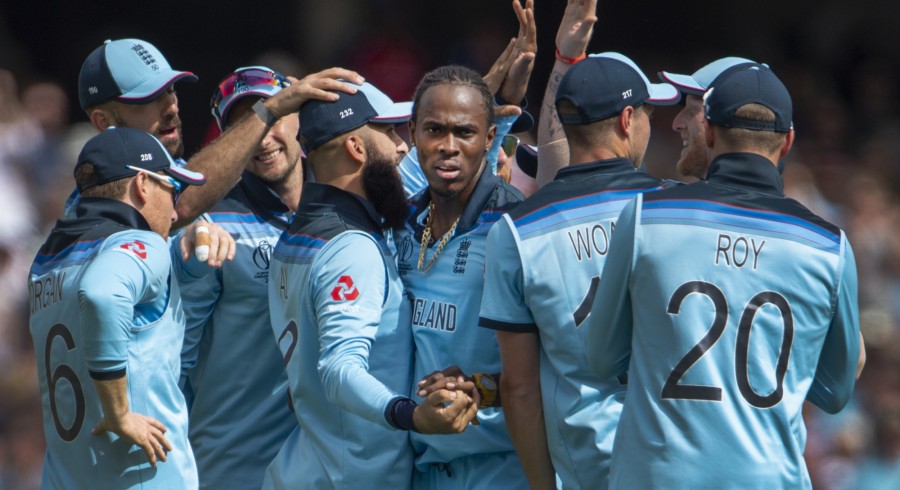 Jason Roy hit the highest individual score of the World Cup so far as England got their campaign back on track with a 106-run win over Bangladesh in Cardiff on Saturday.

Following a surprise defeat by Pakistan, which came after England's opening rout of South Africa, captain Eoin Morgan urged the hosts to "stick to what we do well".

Tournament favourites England, whose rise to the top of the one-day international rankings has been based on aggressive batting, clearly took those words to heart.

Roy's 153 took England to an imposing 386 for six, leaving Bangladesh needing to surpass Ireland's 329-7 against England in 2011, the highest score by any team batting second to win a World Cup match.

Despite Shakib Al Hasan's 121, the Tigers were never in the hunt and they were eventually dismissed for 280 with seven balls to spare.

"It was great to right those wrongs from the last game," said man-of-the match Roy. "Jonny and myself didn't quite know what the pitch was going to behave like so we knew with our line-up batting the whole 50 we were going to get enough. We've put in a well-rounded performance so I'm extremely happy with the boys."

Bangladesh's chase got off to a bad start when fast bowler Jofra Archer (3-29) dismissed Soumya Sarkar for two with a ball that clipped the top of the left-hander's off stump.

But Shakib anchored the innings, flicking Archer for six on his way to a 95-ball century that also included nine fours.

Shakib put on 106 with Mushifqur Rahim (44), a partnership that ended when Roy held a good catch at point.

And 169-3 soon became 170-4 when Mohammad Mithun fell for a duck after edging leg-spinner Adil Rashid to wicket-keeper Jonny Bairstow.

The Test gloveman was behind the stumps after Jos Buttler suffered a hip injury during a typically dashing 64.

Shakib, who had hit fifties in a win over South Africa and a loss to New Zealand this World Cup, was eventually yorked by Ben Stokes to leave Bangladesh on the brink of defeat.

Pace bowling all-rounder Stokes followed up to finish with figures of 3-23.

Earlier, Mortaza put England in on a green-tinged pitch, but Roy and Bairstow (51) seized the initiative during a rapid first-wicket stand of 128.

The in-form Roy was finally caught by Mashrafe off Mehidy Hasan Miraz, holing out after hitting three towering sixes in a row off the spinner.

The Surrey batsman faced 121 balls, hitting 14 fours and five sixes as he fell just short of Andrew Strauss's England World Cup record of 158 against India in Bangalore in 20ll.

Bangladesh captain Mashrafe Mortaza admitted the total was beyond his players.

He praised centurion Shakib: "From the first match he has been playing so well for us. His bowling also has been fantastic. He is performing so well at the moment.

"There is a long way to go, hopefully the other players will step up. The next two or three matches will be very important for us."

The round-robin group stage sees Bangladesh next play Sri Lanka at Bristol on Tuesday, with England facing the West Indies at the Oval on Friday.