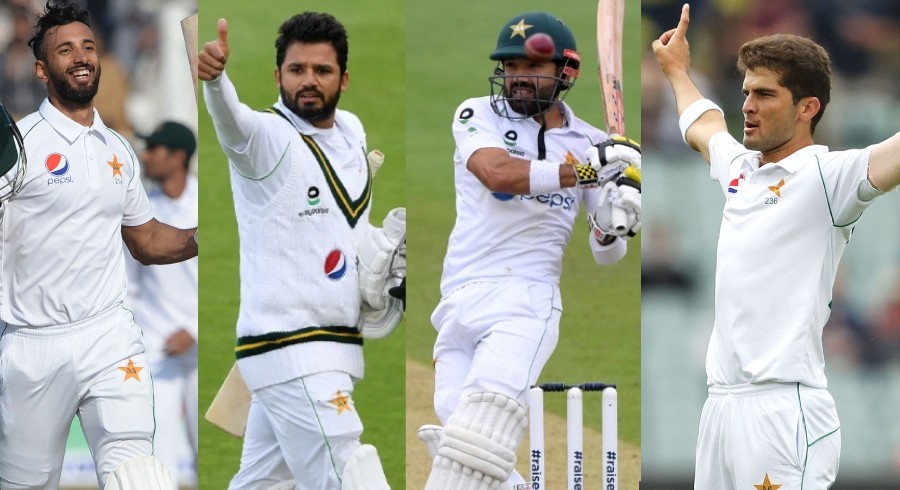 The English county is renowned for signing players from across the globe and Pakistani players have been at the forefront of it. This year, a total of 10 players from Pakistan are currently featuring in the ongoing County Championship 2022.

There have been some breakout performances and we will dive a little deeper into how the players have performed thus far.

After struggling with his form on the international stage, Hasan Ali has regained his confidence after delivering stellar performances right from the start. After four matches, the right-arm pacer has picked up 24 wickets and is currently the leading wicket-taker. In his debut against Kent, Hasan picked up 5 wickets and followed it up with 9 wickets against Gloucestershire, 6 against Hampshire, and 4 against Warwickshire.

Having bowled 40 maidens in the championship, Hasan is averaging a wicket after every 18.5 runs conceded. He has picked up two five-fors and has an impressive economy of 2.70. He is the only bowler in the top three highest wicket-takers to have played one less match than others to date.

Following in Hasan Ali's footsteps, experienced campaigner Mohammad Abbas is second in the list of highest wicket-takers with 22 wickets. The 32-year-old has seen himself being cast aside from the international stage and his recent performances in the county championship might factor when speaking about his comeback.

Abbas started decently against Somerset as he picked up 6 wickets in his opening game of the season. He remained wicketless in his second game against Surrey and failed to get off the mark with the bat in both innings. Most recently, he bagged 9 wickets against Gloucestershire, and in between, he managed to rattle Kent and Lancashire by returning the figures of 4-109 and 3-59 respectively.

Renowned for his precision and accuracy, Abbas currently has the best economy rate of all the bowlers ranked in the top-five highest wicket-takers list and maintains a stellar average of 17.81.

The young pacer rattled the opposition in his debut as he picked up 3-81 and 3-96 in the first and second innings respectively. Haris Rauf then picked up a five-for in the first innings against Kent. However, his efforts came at a price as Rauf picked up a side strain that ruled him out from the second innings play and also the action against Essex. Ottis Gibson, their head coach, later revealed that Rauf had a scan and there is nothing serious. He did, however, mention that Haris will need at least a week's rest and some work from their medical department.

Brought in as a short-term replacement for an injured Naseem Shah, Amir had a disappointing return to the first-class cricket after a break of over two-and-a-half years as he remained wicketless. He finished his debut with 0-80 as the match inevitably came to a draw after Surrey posted 603 runs on the board; Jamie Smith was the star of the match as he remained unbeaten on 234 runs.

The left-arm pacer showed signs of improvement in the following game against Hampshire as managed to not only swing but also seam the bowl. He was rewarded in both innings as he picked up 6 wickets in total and contributed 18 runs in the second innings but his efforts were not enough as his side lost by 87 runs.

Cricket abroad was supposed to be a learning curve for the young Naseem Shah had it not been spoiled by a shoulder injury that ruled him out for a month. "Following discussions between the medical teams of both Gloucestershire and the Pakistan Cricket Board, it has been decided that a period of workload management is in Naseem's best interest to allow him to get back to full fitness as quickly and safely as possible," a statement said.

The pacer bowled 11 overs in his Gloucestershire debut against Northamptonshire where he picked up a wicket and conceded 41 runs in total. Naseem's injury meant that he would be ruled out for a maximum of four matches, which led the team to sign Mohammad Amir as his short-term replacement.

The left-arm spinner has delivered some all-around performances as he has picked up 10 wickets in four games and also contributed with the bat - most prominently against Northamptonshire (2 & 53) and Yorkshire (0 & 40). However, he lost his place in the side after Mohammad Amir's arrival as the teams are only allowed to pick two foreign players; Marcus Harris has already cemented his position at the top which meant Zafar had to give up his place to accommodate Amir's return to first-class cricket.

Captain Peter Handscomb claimed that: "He [Shaheen Afridi] brings something different that we don't have which is incredible." Ranked as one of the best bowlers in the world right now, Shaheen delivered straight away after picking up 4 wickets on his debut followed by 6 against Leicestershire. Most recently, he helped his team register a 7-wicket victory by returning the figures of 4-140. The left-arm pacer has a total of 14 wickets to his name as he averages 25.42 with an economy rate of 3.49.

Shaheen has also remained decent with the bat as he contributed 29 runs in each of his first two games while adding 19 runs to the total in his third game against Sussex.

The wicketkeeper had a rocky start in the 2022 County Championship as he only mustered 26 runs in his first three innings. However, Rizwan pulled things back as he put on a 154-runs with Cheteshwar Pujara in a rare Pakistan-India partnership; Rizwan departed after making 79 runs. He followed it up with a 39-run inning against Middlesex as they lost the game by 7 wickets.

Rizwan has also showcased his bowling skills in the ongoing championship after he stepped up with his medium-pace. Although he remained wicketless, he came very close to picking up his first wicket. The wicketkeeper even took off his pads and took a stunning catch in the slip cordon against Durham.

The left-arm opening batter is currently only 16 runs behind the top-scorer Sean Dickson having played three fewer innings. Shan, who has been struggling to make a comeback in the international team, had a point to prove and he most certainly did with some splendid innings; in his debut against Middlesex, he scored 91 and 62 in respective innings. He then followed up with two back-to-back double centuries against Sussex and Leicestershire respectively. In his latest game against Glamorgan, Shan continued his amazing run with a 60 in the first whereas 42 in the second innings.

Shan is currently averaging 118.83 in the ongoing county championship with an impressive strike rate of 70.94 with a best of 239.

Former Pakistan Test captain and veteran Azhar Ali was picked up by Worcestershire to add value to the team. However, his early performances were a cause for concern as he only scored 34 runs in 5 innings with a best of 20. In his latest game against Durham, Azhar was dismissed for a duck in the first innings as well. However, he stepped up with a 92-run inning to help guide his team to earn a crucial draw.