England Cricket Board hosts its first-ever iftar event at Lord's

In an attempt to break down barriers and push for more diversity and inclusion in sports, Lord's held an event that will go down in history books 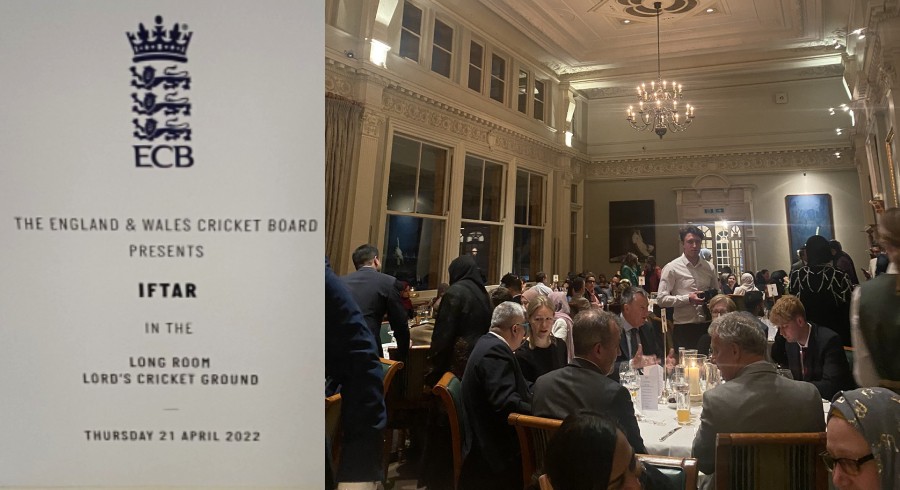 The England and Wales Cricket Board (ECB) hosted its first-ever iftar event at the Home of Cricket, Lord's Cricket Ground. The event was attended by a number of high-profile dignitaries and was hosted by renowned commentators Aatif Nawaz and Tameena Hussain.

Following the Azeem Rafiq racism scandal at Yorkshire Cricket Club, the ECB has been making an active effort to promote a positive culture that is inclusive of all cultures and ethnic backgrounds. Rafiq was also one of the attendees at the event.

THIS GUY is about to host the FIRST EVER ECB Iftar event at Lords in the Long Room. What an honour 😊 pic.twitter.com/kUUMQZmBJ4

In addition to Rafiq's presence, cricket personalities such as George Dobell were also in attendance which made the event a success story. The attendees praised ECB and Lord's Cricket Stadium management for taking the initiative to unite the Muslim community and promote a positive image of themselves on the international stage.

Associate Producer of Sky Sports - Nakul Pande - posted a sensational video of Maghrib Azaan being recited in the Lord's Long Room. He took it to social media and wrote: "You need not be a person of faith, only a person in possession of a soul, to find the adhan call to prayers reverberating around Lord's Long Room spine-tingling. A beautiful moment."

You need not be a person of faith, only a person in possession of a soul, to find the adhan call to prayer reverberating around the @HomeOfCricket Long Room spine-tingling. A beautiful moment. pic.twitter.com/PGN2EsksOC

Former England captain Eoin Morgan also attended the event and spoke a few words at to showcase his appreciation for such an initiative.

The wife of former all-rounder Azhar Mahmood was also invited to the event and she labeled the event as, "breaking barriers and pushing for more diversity and inclusion in our sports."

Delighted to be invited to the First ever iftar @ECB_cricket @HomeOfCricket tonight. Continuing to break barriers and pushing for more diversity and inclusion in our sport and in communities - well done to the team @TameenaHussain @sabah_hamed pic.twitter.com/2xOv3m44sR

Here are some additional reactions from the breakthrough event from various other people who were also invited to the event:

An honour to have been invited to the first Iftar in the long room at Lords. Great evening #ecb #iftar #homeofcricket pic.twitter.com/SxFnBmi4MR

I’ve been privileged to enjoy many @HomeOfCricket Long Room events in recent months but this was one of the most inspiring & meaningful. To @TameenaHussain & the rest of the @ECB_cricket team - thank you for bringing us together so beautifully tonight. #Ramadan 🙏 https://t.co/Xlh9bXuflL

Special to be able to share the evening with @GeorgeDobell1 👊🏽👊🏽 pic.twitter.com/tS7kVXnxlm