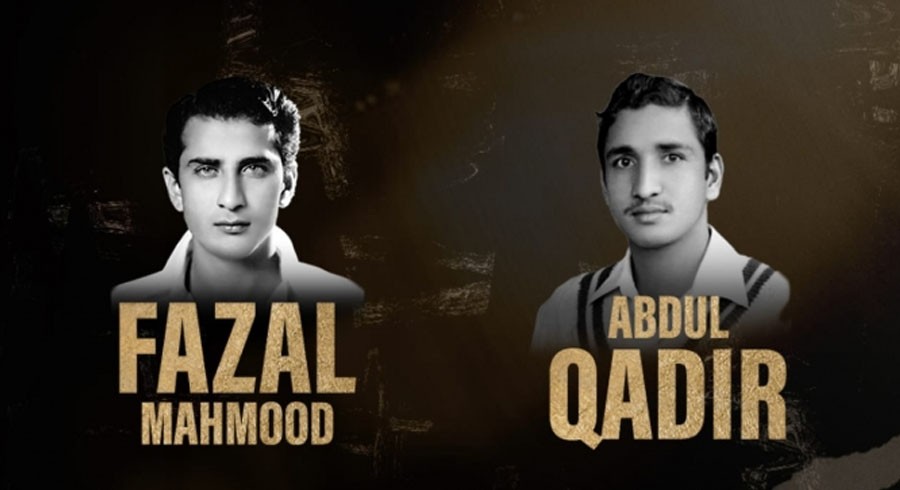 Fazal and Qadir were inducted following a transparent voting process.

The PCB Cricket Committee* was involved in finalising the short-list comprising players who were retired from international cricket for, at least, five years. Subsequently, a 13-person independent voting panel**, comprising three ICC Cricket Hall of Famers, four former Pakistan captains and six respected members of the print and electronic media, was constituted to take part in the voting process, which was overseen by an internal auditor who also confirmed the results in favour of the inductees.

The formal inductions of all the eight PCB Hall of Famers will take place during the ongoing season.

PCB Chairman Ramiz Raja: “It is befitting that Fazal Mahmood and Abdul Qadir, legends from two different eras, be voted by their peers and admirers into the PCB Hall of Fame for 2021. This is a testament to their enormous popularity and is also a recognition of their services to this great game.

“Fazal’s heroics in the early days introduced Pakistan cricket to the world as a force to be reckoned with and later inspired the next generations of fast bowlers. The wily, crafty and magical Abdul Qadir revived and reignited the slowly vanishing art of wrist-spin bowling.

“Fazal Mahmood and Abdul Qadir are all-time greats and truly outstanding ambassadors for Pakistan and global cricket. This is just a small token of our appreciation and gratitude towards their contributions.”

Fazal Mahmood, considered as the first superstar of Pakistan cricket, was born on 18 February 1927 in Lahore and took 139 wickets in 34 Tests from 1952 to 1962, including five wickets in an innings 13 times and 10 wickets or more in a match four times. However, his first-class career had commenced eight years earlier when he represented Northern India in the Ranji Trophy. When he hung his boots after the 1963-64 season, he had grabbed 466 wickets in 112 matches.

In Pakistan’s debut Test series in 1952 in India, Fazal took 20 wickets, including 12 wickets in the Lucknow Test, which Pakistan won by an innings and 43 runs. In the return series in 1954-55, Fazal took 15 wickets in four Tests, while in the 1960-61 series he picked up nine wickets in five Tests.

In 1955, Fazal became the first Pakistan cricketer to be named in Wisden’s Five Cricketers of the Year, a year after his performances had helped Pakistan draw their first series against England in England. Fazal claimed 20 wickets in the four-Test series, including match figures of 12 for 99 at The Oval that earned AH Kardar’s side a 24-run victory.

Fazal’s varied swing and a mixture of leg-cutters were too much to handle for the West Indies as the maestro picked up 20 wickets in the 1957-58 series in the Caribbean and then followed up by 21 wickets in three Tests in the 1958-59 series at home.

Fazal was bestowed with the President’s Pride of Performance Award – the highest national literary award of Pakistan – in 1958. In 2012, he was posthumously awarded the Hilal-e-Imtiaz – the second highest civilian award – in recognition of his services to Pakistan cricket, seven years after his passing on 30 May 2005.

Born on 15 September 1955 in Lahore, Qadir made his Test debut against England in 1977 and in only his second match in Hyderabad, took six for 44 with the Wisden Cricketers Almanack describing him as “the most notable discovery of his type for some time”. In the 1987 Test series against the same opposition at Lahore, Qadir took nine for 56, which still stands as the best bowling performance by a Pakistan bowler.

One of Qadir’s memorable bowling spells was in the 1986 Faisalabad Test against the mighty West Indies when he claimed six for 16 to spin Viv Richards’ side out for a paltry 53 that handed Pakistan a 186 runs victory. In 10 Tests against the West Indies, he picked up 42 wickets.

Qadir also featured in the 1983 and 1987 World Cups, taking 24 wickets in nine matches, including five for 44 against Sri Lanka at Headingley.

Qadir passed on 6 September 2019, with Wisden Cricketers Alamack, in its tribute, writing: “The legendary Pakistani leg-spinner Abdul Qadir was one of the finest exponents of his art, with his skills and magical tricks inspiring generations to come.”

In 1988, Qadir received the President’s Pride of Performance Award, while in 2020, he was conferred with the Sitara-e-Imtiaz, the third-highest civilian award in Pakistan. In 2008, Qadir was one of the subjects of a Wisden Cricketers Alamack feature on five great players who were never a Cricketer of the Year.