Visitors trail by 73 runs with openers, Butt and Ali, laying a solid platform 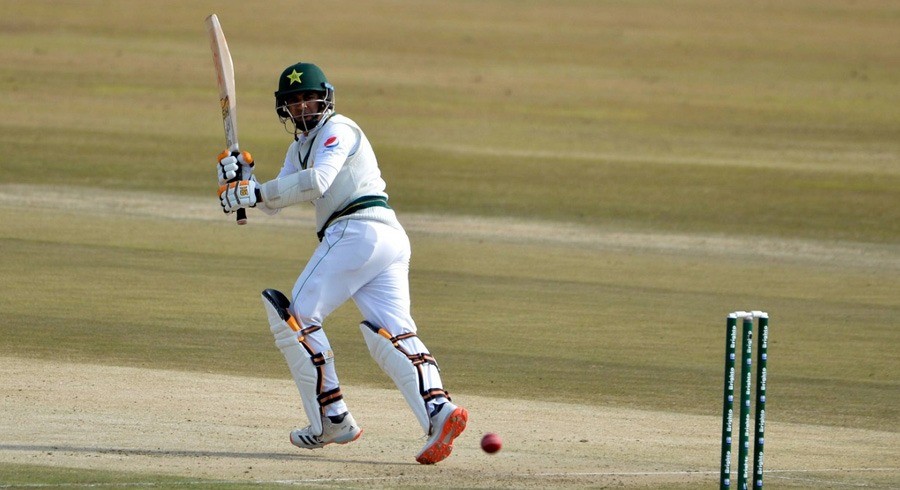 After bowling out Zimbabwe for 176, Abid Ali (56*) and Imran Butt’s (43*) unbeaten century partnership helped Pakistan reach 103 for no loss at the end of day one of first Test in Harare.

While Abid Ali was a little circumspect in his approach early on, Imran Butt looked assured and played couple of excellent drives to get the scoreboard moving.

After surviving a barrage of short balls from Zimbabwe bowlers, Abid pulled one for a four before following it with a leg glance for another boundary.

Zimbabwe brought Donald Tiripano into the attack after opening spells from Muzarabani and Ngarava. The all-rounder went for 13 runs in the first over, but nearly got his revenge in the next over as Imran Butt was dropped by wicketkeeper Regis Chakabva, with Pakistan at 46/0 after 15 overs at drinks break.

The pitch got better as the day progressed and Pakistan openers made full use of it by regularly finding the boundaries in the last hour of the day.

Left-arm spinner Tendai Chisoro also failed to provide the breakthrough which prompted Zimbabwe captain to revert back to his main pacers, Muzarabani and Ngarava.

Abid Ali took a particular liking to Ngarava as he hit the left-arm pacer for two boundaries and then followed it up with two runs to bring up his second Test fifty.

Imran brought up the 100-run partnership with a beautiful straight drive against Ngarava.

Earlier, Hasan Ali and Shaheen Afridi bagged four wickets each to bowl out Zimbabwe after they opted to bat first.

Pakistan took full advantage of the morning conditions as they reduced Zimbabwe to 59/4 at the end of first session on day one.

Hasan Ali struck for Pakistan in his first over as he removed Kevin Kasuza for a duck. The right-hand opener dragged the ball on to his stumps, leaving Zimbabwe one down without any runs on the scoreboard.

Prince Masvaure got his first runs through an outside edge which ran past slips for a boundary. Shaheen Afridi kept probing away at Masvaure by bowling at off side channel, with the opener pushing away constantly with hard hands.

The left-arm pacer was finally rewarded after an edge from Masvaure’s bat finally went straight into the hands of Imran Butt at second slip. The left-hander departed for 11, with Zimbabwe having lost both their openers for 18.

The pressure was brewing on Zimbabwe batsmen as they played eight maidens in a row from the sixth till 14th over.

Tarisai Musakanda broke the shackles in the 16th over as he dispatched Nauman Ali for a six over wide long-on.

Nauman got his revenge in the next over as he went past Musakanda’s defense to rattle the stumps. The right-hander departed after scoring 14.

Zimbabwe captain Brendan Taylor followed Musakanda soon as he tried to push very hard, away from his body, to a full ball from Hasan Ali and was caught at slip by Faheem Ashraf for five.

With Zimbabwe reeling at 30-4, debutants, Roy Kaia and Milton Shumba, stitched an unbeaten 29-run partnership to take the hosts to lunch without any more loss of wickets.

Zimbabwe batsmen started positively after lunch as Milton Shumba smashed Shaheen Afridi for two boundaries in his first over after the first session.

Shumba, who was dropped on 0 by Babar, made full use of the opportunity and continued to rotate strike, bringing up a fifty partnership with his fellow debutant Roy Kaia.

Shumba was living a charmed life as he was dropped again on 27, with Babar Azam being the culprit again. However, a mix-up in the middle brought an end to Shumba’s stays as he departed for 27.

At the other end, Kaia was looking solid as he made use of the sweep to counter the spin threat from Pakistan. He found an able ally in Regis Chakabva, who accelerated the Zimbabwe innings.

With Kaia well-set on 48, Hasan Ali put a trap in place for the debutant which worked perfectly. Hasan bowled three bouncers on the trot to induce Kaia to hook towards the fielder was placed at deep square leg. The right-arm pacer then surprised the debutant with a Yorker and trapped him lbw.

Hasan quickly picked his fourth wicket as Chakabva tried to drive a full delivery from the pacer but was caught at slip by Imran Butt for 19.

Shaheen Afridi picked up his 50th Test wicket as he bowled Tendai Chisoro for 9, leaving Zimbabwe eight down.

Blessing Muzarabani tried to attack every ball and was eventually cleaned up by a Yorker from Shaheen Afridi for 17.

Donald Tiripano, who scored 95 against Afghanistan a month ago, continued his rich vein of form with bat to play a  crucial unbeaten 28-run knock to take Zimbabwe to 176, before Shaheen clean bowled Richard Ngarava for 1.