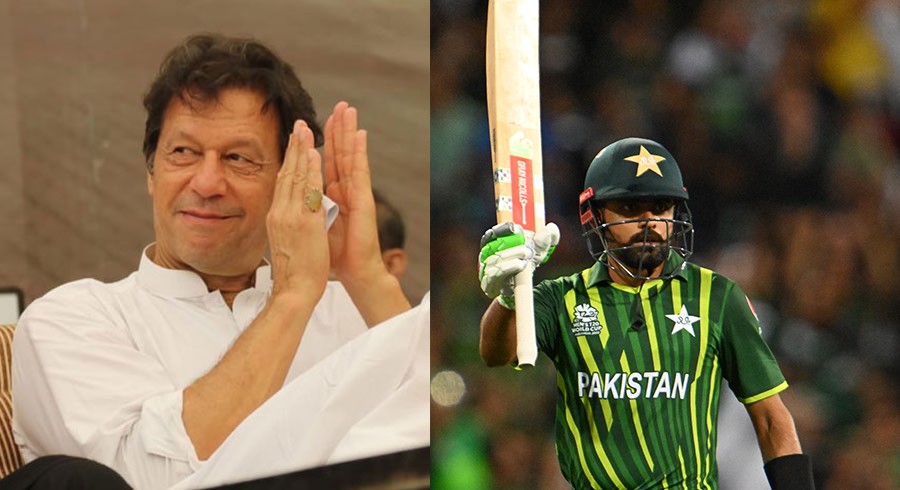 Former Pakistan captain and Prime Minister Imran Khan is elated over the Men in Green's performance against New Zealand in the first semi-final of the T20 World Cup.

Babar Azam and his men outclassed the Blackcaps by seven wickets to reach their third T20 World Cup final.

Meanwhile, Imran Khan revealed that he asked then Pakistan Cricket Board (PCB) Chairman Ehsan Mani to appoint him the side's captain. Babar replaced Sarfaraz Ahmed as captain in October 2019.

"Our cricket was going through a bad time when I was the Prime Minister," Imran said while speaking to Piers Morgan in his 'TalkTV' show on Wednesday.

"I only watched him play twice and immediately asked the head of the cricket board, you must make him the captain because he is genuinely world-class. He is exceptional and I haven't seen a player with such versatility and correct technique, such stroke play and temperament; he could go anywhere from here," the former all-rounder added.

"Him as the captain makes a lot of sense because you want your captain to be world-class so that he commands respect," he maintained.

Imran Khan expressed high hopes for the Pakistan national cricket team winning the tournment. "I think our team looks good. I think we might just win the final."

The Black Caps had set a 153-run target for Pakistan which the Men in Green chased down with ease.

Skipper Babar Azam and wicketkeeper-batsman Mohammad Rizwan had a 105-run partnership. It was in the 12th over that New Zealand dismissed Babar for 53 to end the partnership. At that point, Pakistan required 47 from 43 balls.

But by then, the Men In Green had already gained much ground. Rizwan and Mohammad Haris kept the scoreboard ticking until the wicketkeeper was dismissed via run out at 57.

Haris was caught at short fine leg on the last ball of the 19th over. Right in the next over, Pakistan won the match by seven wickets.

The Men In Green will now face either England or India — who will face off tomorrow.