England were eyeing a remarkable win in the third women's one-day international when India bowler Deepti Sharma ran out non-striker Charlie Dean, who was well out of her ground 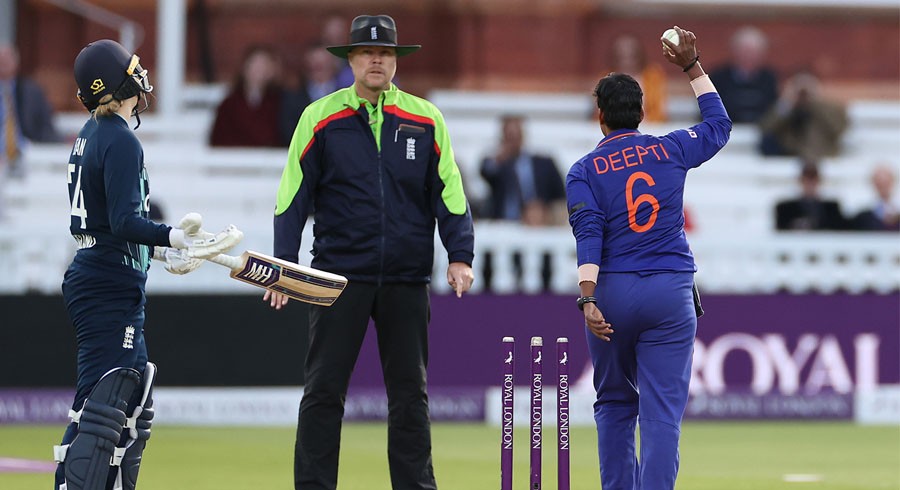 India captain Harmanpreet Kaur insisted her side had committed no "crime" after sealing victory over England at Lord's on Saturday with a run-out at the non-striker's end.

England were eyeing a remarkable win in the third women's one-day international when India bowler Deepti Sharma ran out non-striker Charlie Dean, who was well out of her ground.

An emotional Dean broke down in tears when her dismissal was confirmed before sportingly shaking hands with her opponents.

Despite being allowed under cricket's rules, running out a non-striker backing up has long been regarded as unsporting by many within the game.

But it was only this week the International Cricket Council reiterated the dismissal, known as a "Mankad" after India's Vinoo Mankad, who ran out Australia batsman Bill Brown backing up in a 1948 Test in Sydney, was completely legitimate.

This was both teams' first match at Lord's since England beat India in the 2017 Women's World Cup final.

And while some boos were heard following Dean's dismissal, Kaur was adamant Sharma had done nothing to overshadow either the victory or India pace great Jhulan Goswami's last match before international retirement.

"Today whatever we have done I don't think it was any crime, it is part of the game and it is an ICC rule and I think we just need to back our player," Kaur said.

"I don't think (Sharma) has done something wrong and we just need to back her."

England seamer Kate Cross said she would never take a wicket in this way but added: "I think it's a dismissal that's always going to divide opinion. That's all that's ever going to get said about it: some people are going to like it, some people aren't.

"If we're looking at the real positives, then maybe that's the only way they could have got Deano out today."