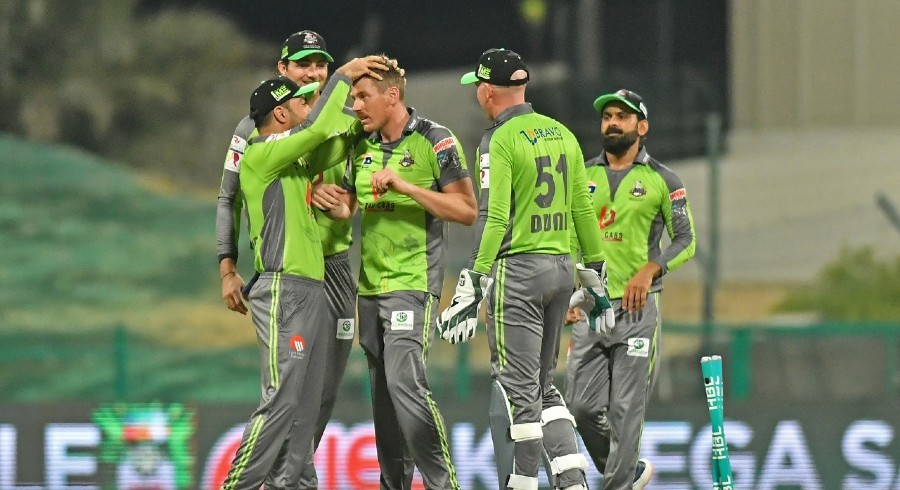 Islamabad United managed to make 143 runs for the loss of nine wickets despite a relentless display from the bowlers of Lahore Qalandars during their Habib Bank Limited (HBL) Pakistan Super League (PSL) season six encounter in Abu Dhabi on Wednesday.

After winning the toss and opting to field first, Lahore Qalandars were off to a sloppy start as fielder Haris Rauf dropped an easy catch as opener Usman Khawaja was given another life in the first over of the match by pacer Shaheen Shah Afridi.

Pacer James Faulkner shared the new ball with Shaheen and looked sloppy during his first few deliveries. The experienced pacer however soon found his rhythm, dislodging opener Colin Munro’s (11 off seven) stumps as the batsman looked to be gaining steam.

In his next over Faulkner then removed promising wicketkeeper-batsman Rohail Nazir (eight off five), caught by fielder Fakhar Zaman.

Skipper Shadab Khan (seven off eight) fell next as Faulkner picked up his third wicket.

Pacer Haris Rauf then stepped up for his side removing opener Usman Khawaja (18 off 17), caught by fielder James Faulkner as Islamabad United scrambled to find a steady partnership.

Batsman Iftikhar Ahmed (12 off 16) succumbed to the building pressure as he miscued a delivery from pacer Ahmed Daniyal to skipper Sohail Akhtar, who completed an easy catch.

Tailender Hasan Ali tried to up the ante but holed out to fielder Shaheen Shah off the bowling of pacer Haris Rauf after scoring just 14 runs off nine balls.

All-rounder Faheem Ashraf was the highest scorer for Islamabad United after scoring 27 runs off 24 balls before falling through a caught and bowled off pacer Shaheen Shah.

Tailenders Mohammad Wasim (10 off five) and Fawad Ahmed (four off three) remained unbeaten in the end as their side managed 143 runs for the loss of nine wickets in their allotted overs.

Faulkner was the pick of the bowlers for Lahore Qalandars after taking three wickets while pacers Haris Rauf and Ahmed Daniyal shared two wickets apiece.