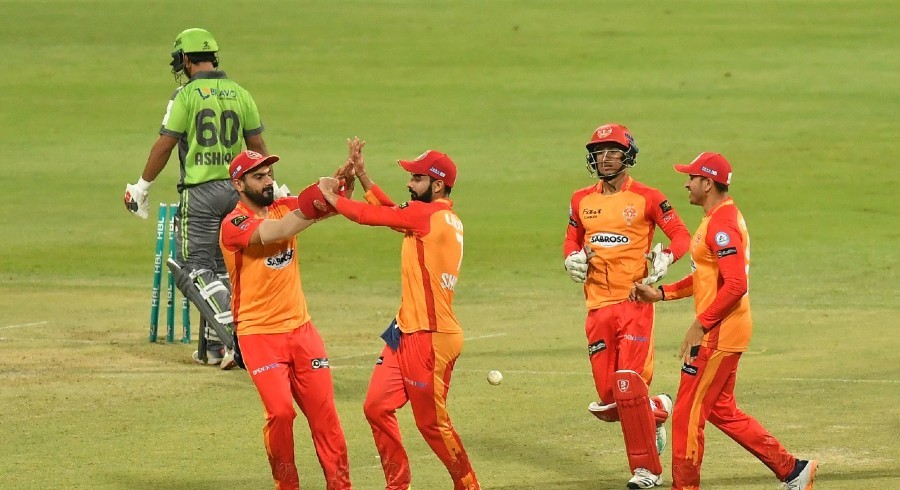 Chasing a tricky target of 153 runs, Lahore Qalandars’ opener Fakhar Zaman and Sohail Akhtar got their side off to a steady start.

The two batsmen combined for a solid 55-run stand off 36 balls which laid a solid platform for their side to chase down the target.

Leg-spinner Fawad Ahmed finally got the better of Sohail Akhtar with a successful LBW after he had scored 34 runs off 19 balls.

As Lahore Qalandars seemed to be cruising along towards the target, pacer Musa Khan produced an inspired over halfway through the innings that led to a dramatic collapse.

Batsman Ben Dunk was then caught behind by wicketkeeper Rohail Nazir in the same over as Islamabad United got an important opening back into the match.

Fakhar Zaman, who had been solid in the middle, stood between Islamabad United and their charge towards victory.

Musa Khan was the man to step up once more for his side, removing Fakhar Zaman, caught by fielder Iftikhar Ahmed after the batsman had scored 44 runs off 37 balls.

With the settled batsman back in the hut, Islamabad United bowlers went for the jugular and wickets started falling in heaps.

The leg-spinner then bowled all-rounder Rashid Khan after he had scored just four runs of seven balls.

Lahore Qalandars misery continued as tailender Shaheen Shah was run-out for a duck.

Leg-spinner Fawad Ahmed then broke through the defenses of all-rounder James Faulkner after he had scored just one run.

Bowler Ali Khan then picked up the last wicket of tailender Haris Rauf (17 off 11), caught by fielder Iftikhar Ahmed, as Islamabad United wrapped up Lahore Qalandars batting for 124 runs in 18.2 overs to complete a surprising 28 run victory.

Musa Khan was the standout bowler for his side, picking up three wickets in his allotted overs.

After winning the toss and opting to bat first, Islamabad United were off to a horror start as the relentless Lahore Qalandars attack blew over half of the opposition batsmen in quick fashion.

Opener Usman Khawaja was the first wicket to fall after being caught behind by wicketkeeper Ben Dunk off the bowling of pacer Shaheen Shah for a duck.

Wicketkeeper-batsman Rohail Nazir (one off three) was next as he was adjudged LBW off the bowling of all-rounder James Faulkner.

Faulkner then removed batsman Colin Munro (four off 11), adjudged LBW, and all-rounder Hussain Talat (eight off 13), caught by fielder Tim David, as Islamabad United found themselves in a lot of trouble early.

Pacer Haris Rauf then got skipper Shadab Khan (five off seven) to nick behind for a successful caught behind by wicketkeeper Ben Dunk as Lahore Qalandars seemed likely to end the opposition innings early.

Batsman Asif Ali and Iftikhar Ahmed, however, had different plans and the duo combined for a 123-run partnership off 76 balls to ensure their side was still in the game.

Asif Ali was explosive throughout his stay in the middle, finally falling to pacer Shaheen Shah through a hit wicket dismissal after scoring 75 runs off 43 balls.

Iftikhar Ahmed was then removed in the last over of the innings by pacer Haris Rauf, caught by fielder Rashid Khan, after scoring a well-composed 49-run knock off 37 balls to ensure that his side managed a respectable 152-run total for the loss of seven wickets in their allotted overs.

Faulkner was the most successful bowler from Lahore Qalandars, picking up three wickets at the expense of 19 runs in his allotted overs.