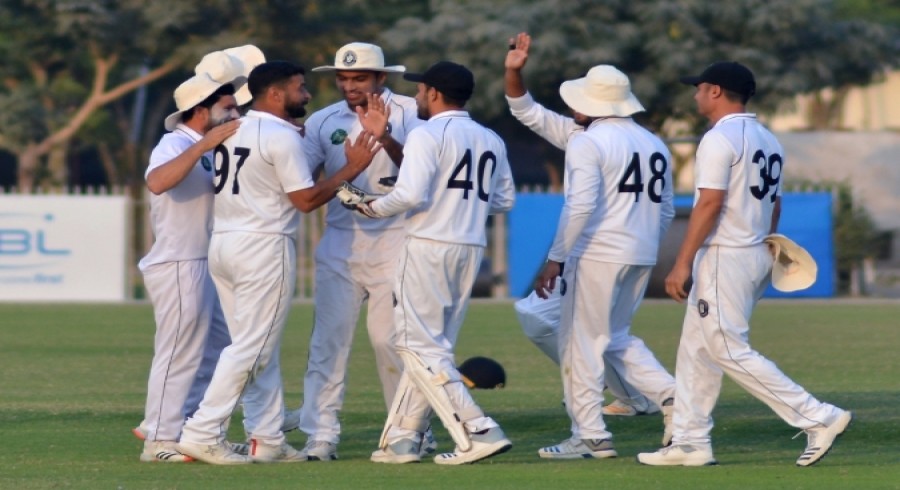 Title defenders Central Punjab had half of their batting lineup back in the hut with just 65 runs on board in their second innings at the close of play. They still have a 13- run deficit to surmount when Mohammad Saad (three) and Saad Nasim (14) resume their innings tomorrow morning.

Khalid, who batted at eight, struck 10 fours and two sixes in his undefeated 141-ball stay at the crease. He arrived at the crease with Khyber Pakhtunkhwa struggling at 98 for six after resuming the day at 61 for four.

The other notable contribution with bat came from Kamran Ghulam, who scored 43 runs from 115 balls with the help of six fours and a six.

Pacer Waqas Maqsood and off-spinner Bilal Asif added one wicket each to their tally to finish with three for 41 and three for 107. Ahmed Safi Abdullah returned two for 41.

Sindh’s Omair Bin Yousuf scored a brilliant 153 from 253 balls at the National Stadium against Southern Punjab. The 21-year-old right-handed batsman had scored his career’s fourth century yesterday and resumed the innings on 129.

Over his 423-minute stay at the crease, stretched over four sessions, Omair stroked 15 fours, in a match which is being broadcast on PTV Sports and beamed across the globe through PCB’s YouTube channel.

His captain Asad Shafiq, who had retired hurt yesterday, added 18 runs to his overnight score before he was dismissed on 141 by leg-spinner Zahid Mehmood, who stood out with an impressive four for 84.

Asad hit 18 fours from the 241 balls he faced before Sindh were all out for 383 in 111.5 overs. They gathered four bonus points for batting as they had breached the 350-run mark by the completion of 100 overs, while Southern Punjab bagged two points for dismissing six batsmen.

Zain Abbas’s unbeaten 75 had lifted Southern Punjab to 148 for the loss of two wickets in 51 overs when stumps were drawn. Zain has crunched 10 boundaries from the 141 balls he has faced to date.

The 29-year-old Kabirwala-born stitched a crucial 81-run alliance with Imran Rafiq (42) after his opening partner Mukhtar Ahmed (two) was sent packing early in the innings by pacer Tabish Khan, who took both Southern Punjab wickets.

On Sunday, Zain will resume the 56-run stand for the unfinished third wicket with Said Badar, who has scored 27 runs from 54 balls.

Half-centuries by Ayaz Tasawar and Kashif Bhatti helped Balochistan post an imposing 418 all out from 124.3 overs against Northern at the National Bank Sports Complex.

Ayaz scored 71 from 107 balls with the help of 11 boundaries, while Kashif smashed a 68-ball 54, studded with five fours and a six.

The other notable contribution down the order came from number nine batsman Mohammad Talha, who scored 30 from 22 balls, which included three sixes and two fours.

Northern captain Nauman Ali added another wicket to his account as he finished with four for 129, while Mohammad Nawaz and Nasir Nawaz picked up two wickets each.

Northern, in their reply, were 196 for six at the close of play. A large chunk of their total was contributed by one-drop Faizan Riaz who recorded his career’s 19th first-class half-century.

Faizan smashed 12 fours and a six in his 109-ball 78 to lift his side from a precarious give for three as he stitched a 68-run partnership for the fourth wicket with Asif Ali (36).

Mohammad Nawaz was unbeaten on 39. The day ended with the dismissal of all-rounder Hammad Azam, who scored 34 from 62.

At UBL Sports Complex, Central Punjab won the toss and elected to bat:

At the National Stadium, Sindh won the toss and elected to bat:

Points to date: Sindh 4 (all batting), Southern Punjab 2 (all bowling)