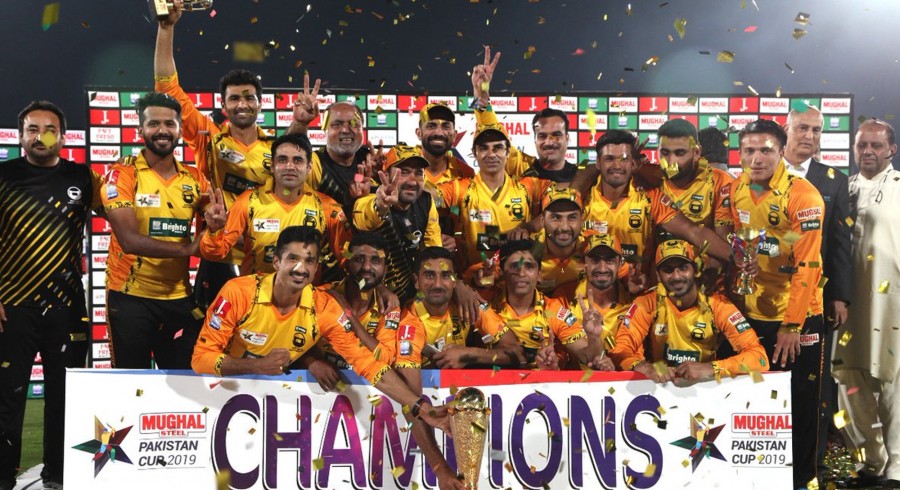 Khyber-Pakhtunkhwa (K-P) won the Pakistan Cup 2019 with a thrilling nine-run victory over Balochistan in front of a packed Pindi Cricket Stadium, Rawalpindi, on Friday.

The final went down to the wire with Balochistan requiring 12 in the last over to overhaul K-P’s 307. However, Balochistan managed only two runs to finish at 298 for nine.

When the penultimate over started, Balochistan needed 22 with four wickets standing, but while they scored 10 runs, they lost three crucial wickets and looked down and out.

Pacer Sohail Khan was the star bowler for K-P, who finished with figures of three for 75, while fellow fast-bowler Umaid Asif bagged two for 51. Sohail, who had earlier contributed a rapid 45 not out, was later adjudged player of the final.

Opener Awaiz Zia had led Balochistan’s run-chase when he scored a 94-ball 83 that included 10 fours. He set the platform for a potential victory by putting on 92 runs for the second wicket with Asad Shafiq (48 off 45 balls).

However, barring Fawad Alam, 48 off 61 balls with two fours, no other batsman could take Balochistan to their maiden title. In contrast, K-P collected their second title after winning the inaugural event in 2016.

The Pindi Cricket Stadium was packed to capacity for the final, the crowd made their way to the stadium from the afternoon and wholeheartedly supported the two teams who fought tooth and nail for victory in the tournament decider. The Pindi Stadium enclosures were adorned by big Pakistan flags as the vibrant crowd turned the occasion into a memorable one.

Earlier in the day, opener Abid Ali’s sixth List-A century was the highlight of K-P’s batting effort, after captain Salman Butt had won the toss and opted to bat first.

Ali added 136 runs for the second wicket with Mohammad Saad, 51 off 61 balls, after Salman (two) had fallen cheaply to pacer Haris Rauf.

Ali singlehandedly kept the K-P innings together as wickets fell from the other end. The right-hander completed his 100 off 91 balls as he maintained a healthy strike rate throughout. He was eventually dismissed by Ammad Butt for a 119-ball 132 that included 12 fours and three sixes with K-P placed at 238 for six in the 43rd over.

K-P went past the 300-run mark, courtesy some lusty blows by Khan who scored an unbeaten 45 off only 20 balls with the help of one four and five sixes.

Khan added 69 off the last 40 balls of the innings with tailender Wahab Riaz, who scored 22 off 21 balls. Ali Imran with three for 48 in 10 overs was the pick of the Balochistan bowlers. Rauf took two for 41 in his 10 overs.