First Ashes Test match is being played at Edgbaston 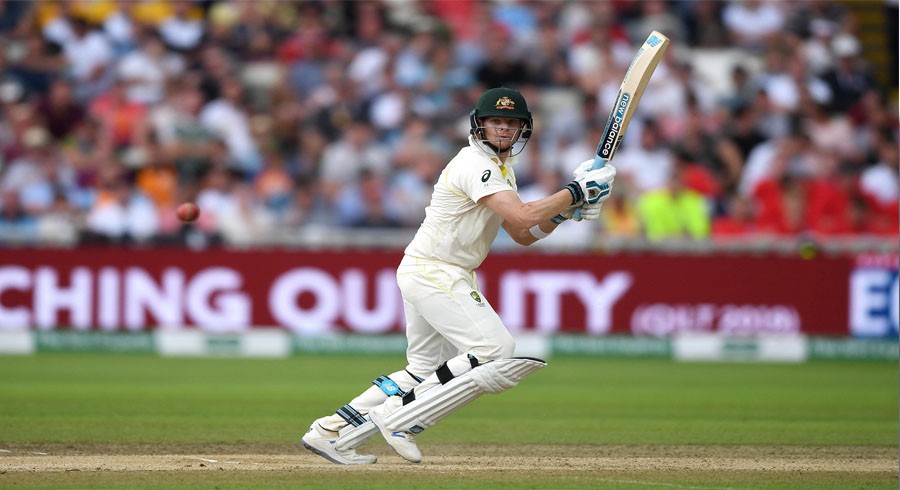 Australia were left hoping for another major innings from Steve Smith as England took charge of the first Ashes Test at Edgbaston on Saturday.

When bad light cut short the third day's play, Australia were 124-3 in their second innings — a lead of just 34 runs.

Former captain Smith, who had made a superb 144 in the first innings of his first Test since completing a 12-month ban for his role in last year's ball-tampering scandal in South Africa, was 46 not out.

Travis Head was 21 not out, with the pair's stand worth 49 runs.

"We leaked a few too many (runs) tonight," England's Chris Woakes told Sky Sports. "At the same time 34-3 is not a bad spot. If we come back in the morning and get two wickets then 50-5 will be pretty good."

Woakes, asked how Smith could be dismissed, replied: "Have you got any ideas? He is a world-class player and world-class players don't make many mistakes. On a wicket like that you have to build pressure and hope they make a mistake."

Australia will want to bat long enough to leave England with an awkward chase on a wearing pitch.

"Anything over 150 going into last day on this wicket (will be tough to get)," said Australia fast bowler James Pattinson.

Australia, looking to win their first series away to England in 18 years, were in trouble at 27-2 after openers David Warner and Cameron Bancroft — also returning to Test duty after the ball-tampering scandal -- both fell in single figures.

In a match full of overturned decisions, England had to review umpire Joel Wilson's original not out verdict when Warner feathered a catch behind to wicketkeeper Jonny Bairstow to give Stuart Broad his 450th Test wicket.

It was an important blow for Broad, who took 5-86 in Australia's first innings of 284, as new-ball partner James Anderson was absent with a calf injury that meant England's all-time leading Test wicket-taker only bowled four overs first time around.

Off-spinner Moeen Ali then had Bancroft caught off bat and pad by Jos Buttler at short leg.

Smith's arrival at the crease prompted a huge chorus of boos from England fans who earlier in the day had taunted him with chants of "Crying on the telly, we saw you crying on the telly" in a reference to the star batsman's emotional press conference in Sydney after he was sent home from South Africa.

Usman Khawaja might have been out for 11 but Buttler, now in the slips, failed to hold a tough chance off Moeen.

Khawaja made an attractive 40 before the left-hander was undone by all-rounder Ben Stokes's second ball, a superb delivery that cut back sharply to have him caught behind.

Smith, on 41, was struck on the side of the head by a Stokes bouncer after missing an intended pull, but was passed fit to bat on by Australia's team doctor.

Soon afterwards, although the floodlights were on, the umpires decided it was too dark to continue and halted play shortly before heavy rain fell.

But a ninth-wicket partnership of 65 between Woakes and Broad (29) boosted their total.

Off-spinner Nathan Lyon finally ended left-hander’s marathon innings when a delivery that turned and bounced took the outside edge and was well caught by Australia captain and wicketkeeper Tim Paine. Burns faced 312 balls, with 17 fours.

By contrast, new batsman Moeen lasted just five balls before he inexplicably shouldered arms to Lyon (3-112) and was clean bowled for a duck.