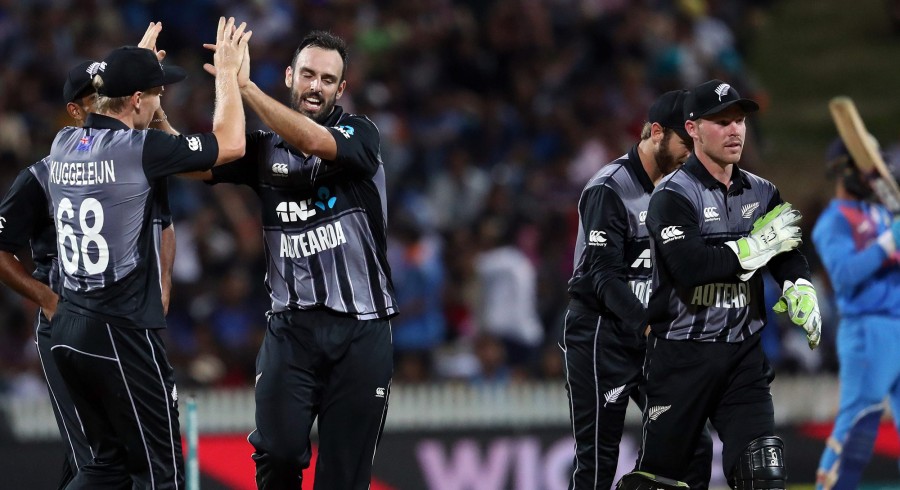 Colin Munro's explosive 72 set New Zealand up for victory with a four-run win over India in a cliff-hanger finish to Sunday's Twenty20 match in Hamilton, handing the hosts a 2-1 series victory.

India looked to be on the ropes when they needed 47 off the last three overs.

Dinesh Karthik and Krunal Pandya together plundered 32 off overs 18 and 19 but Tim Southee restricted the duo to 11 in the 20th.

The morale-boosting victory for New Zealand came after being whipped 4-1 by India in the earlier one-day international series.

It was also a vital knock from Munro, whose position in the New Zealand side ahead of the World Cup had been in question after a string of failures in the ODI and Twenty20 matches against India.

Munro charged down the track to smack Bhuvneshwar Kumar over the rope with the first ball he faced to kick off a flying partnership with Tim Seifert.

The pair raced to 80 in the eighth over when the lightning hands of MS Dhoni had Seifert stumped by a hair's breadth for 43.

Munro's belligerence earned him 72 off 40 balls, flaying the bowling with five fours and five sixes. He was removed by Kuldeep Yadav when he skied a ball to Hardik Pandya running in from long-on.

Kane Williamson (27) fell in the next over when he pulled a rising delivery from Khaleel Ahmed to Yadav at fine leg.

Colin de Grandhomme chimed in with 30 off 16 to ensure New Zealand passed the critical 200 mark for the second time in the series.

Vijay Shankar took an equally aggressive stance at the start of India's chase and the visitors were up at the required run rate through the first half of their innings, but were unable to establish partnerships.

Rishabh Pant belted a four and two sixes with his first three scoring shots and raced to 28 off 12 before he became debutant Blair Tickner's first victim, swiping at a full toss that was caught at mid-wicket.

Sharma's attempt to bat through the innings while others created mayhem came to an end on 38.

Hardik Pandya's brief cameo produced 21 while MS Dhoni, feted as the master finisher, could only make two in a brief stay at the crease.

With the game slipping away from India, Dinish Karthik pounded the boundaries with 33 off 16 deliveries while Krunal Pandya made 26 off 13.

New Zealand next host Bangladesh in a series of three ODIs and three Tests.