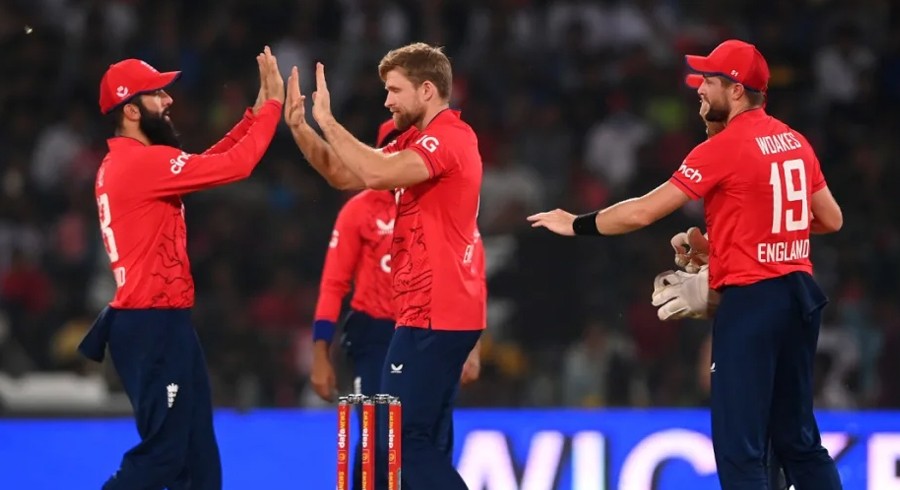 England made their tour to Pakistan after 17 years a memorable one by sealing the seven-T20I series 4-3 on Sunday night in front of a full house at the Gaddafi Stadium.

Pakistan fell 67 runs short of England’s 209. The hosts never got firing in the run chase with Babar Azam, the second highest run-scorer in the series with 285 at 57, falling to Chris Woakes in the first over and Reece Topley accounting for top-ranked Mohammad Rizwan (the highest run-getter of the series with 316 at 63.20) with an in-swinging yorker in the next.

Iftikhar Ahmed was Pakistan’s third wicket to fall in the powerplay as he was caught off David Willey in the sixth. A 53-run partnership between Shan Masood (53 off 43) and Khushdil Shah (27 off 25) put a halt on the flow of wickets till the 13th over, but the slow pace of runs accumulation put Pakistan behind England.

When Khushdul was caught behind off Adil Rashid, working the ball down the leg, it sparked a collapse. Pakistan were a batter short with Shadab Khan sustaining a hamstring strain.

Woakes – returning to the side – was the pick of the bowlers with three for 26 and Willey took two wickets for 22.

Belligerent knocks from Dawid Malan and Harry Brook propelled England to a towering 209 for three following Pakistan’s decision to bowl. Malan smoked Pakistan bowlers for eight fours and three gigantic sixes in his incredible 47-ball 78 not out and Brook’s impressive 29-ball 46 not out was studded with four sixes and a four.

The pair had come together at 9.5 overs with the dismissal of Ben Duckett, who made 30 in 19 (hitting three fours and a six), and launched a counterattack as they scored 108 runs off 61 balls.

England were off to a flyer with Phil Salt (20 off 12) dispatching Mohammad Nawaz for two fours in the first over and Alex Hales (18 off 13) smashing Mohammad Wasim Jnr for three consecutive boundaries in the latter half of the third over.

Haris Rauf bowled beautifully, deceiving the England batters with his splendid cutters. Despite England scoring at 10.45 per over, his four overs cost only 24 runs. It was not only the final T20I in which he proved his mettle, but the right-arm fast bowler has been incredible throughout the series, something that is highlighted by his stats – eight wickets, the most for any bowler in the series, at an average of 23.62 and an extraordinary economy of 7.87 for a bowler who bowls in the powerplay and death.

With the Salt and Hales onslaught on, Haris was magnificent in the fourth over, giving away only four. The over added to the pressure on the two openers and brought the wicket of Hales on the first ball of the fifth as he was trapped LBW off Mohammad Hasnain and a bizarre mix-up between Malan and Salt resulted in the latter’s run out two balls later.

Malan, however, was quick to shift the pressure back on Pakistan by stroking Hasnain for back-to-back fours on the fourth and fifth balls. This proved to be the start of a blistering 62-run stand off just 32 balls between Malan and Duckett that needed exemplary glovework from Mohammad Rizwan to end.

The high point of their partnership was the ninth over – that added 20 runs to England’s total - when the two smashed Shadab Khan for a six each.