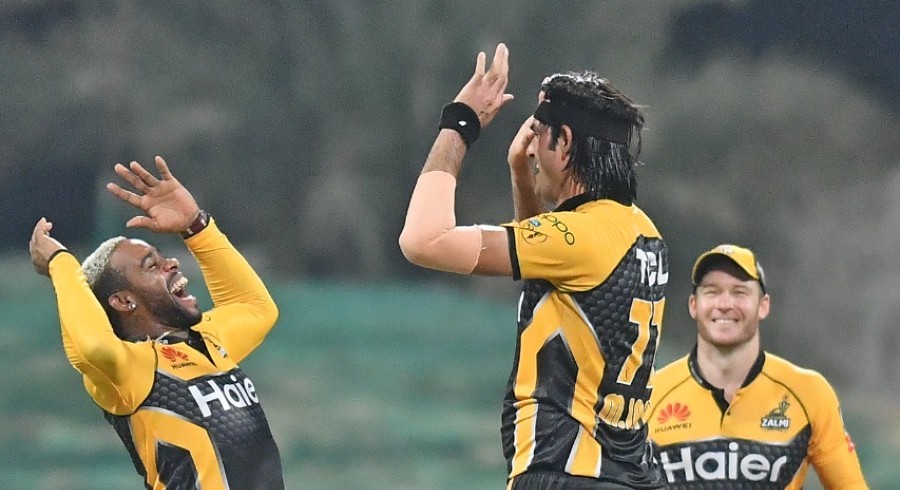 Chasing a daunting target of 198 runs, Quetta Gladiators were off to a cautious start, hoping that fireworks at the backend would give them the best chance to pull off a big chase.

However, opener Usman Khan was the first to depart, caught by fielder Shoaib Malik off the bowling of spinner Fabian Allen, after scoring 28 runs off 23 balls.

Quetta Gladiators were dealt a massive blow as pacer Mohammad Irfan then removed batsman Azam Khan, caught by fielder Umaid Asif, for a duck and bowled batsman Cameron Delport for a golden duck.

Pacer Umaid Asif delivered another devastating double-strike as he removed batsman Jake Weatherald (13 off eight), caught behind by wicketkeeper Kamran Akmal, before bowling Mohammad Nawaz for a golden duck.

All-rounder Khurram Shahzad was the next to depart courtesy of a run-out after scoring 11 runs off 20 balls.

Skipper Wahab Riaz removed tailender Mohammad Hasnain for a golden duck and then bowled tailender Zahid Mahmood for a duck.

Skipper Sarfaraz Ahmed played out the remaining deliveries remaining unbeaten on 36 runs off 28 balls as his side could only manage 136 runs for the loss of nine wickets in their allotted overs, falling short by 61 runs.

Mohammad Irfan was the standout bowler for his side picking up three wickets.

Earlier, after winning the toss and opting to field first, Quetta Gladiators were off to a great start as left-arm spinner Mohammad Nawaz removed opener Haider Ali and veteran all-rounder Shoaib Malik early.

Haider was removed for a golden duck caught by substitute fielder Usman Shinwari while Shoaib Malik (two off six) was caught by fielder Zahir Khan.

Despite the early setback, opener Kamran Akmal and batsman David Miller played with a positive intent.

The two batsmen combined for a sensational 125-run partnership off 73 balls to provide a solid foundation for their side.

Kamran Akmal was finally removed by pacer Mohammad Hasnain with a successful LBW appeal after scoring 59 runs off 37 balls.

Batsman Sherfane Rutherford departed towards the end of the innings courtesy of a run-out after scoring 10 runs off 12 balls.

Batsman Rovman Powell however did not let the solid platform laid by Akmal and Miller go to waste, scoring a punishing 43-run knock of just 19 balls to propel his side to 197 runs for the loss of five wickets in their allotted overs.

Mohammad Nawaz was the pick of the bowlers for Quetta Gladiators after taking two wickets.