Gladiators down Zalmi to reach final of HBL PSL 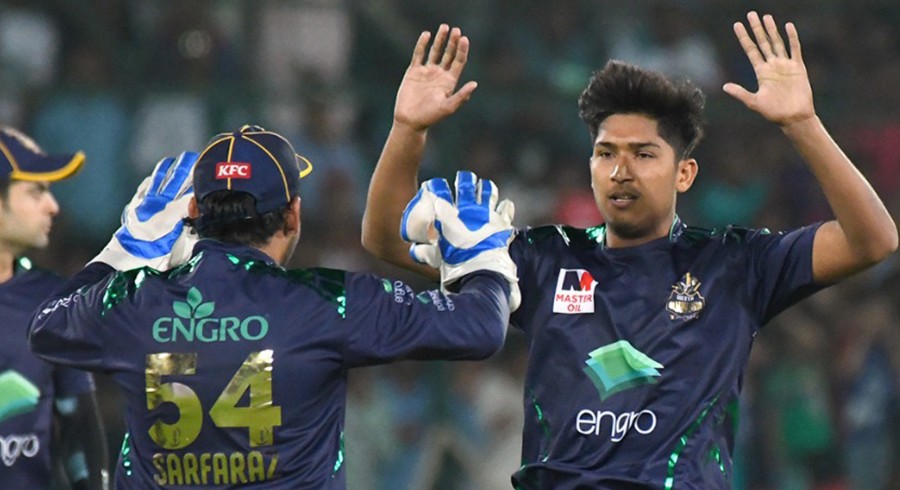 Quetta Gladiators defeated Peshawar Zalmi by 10 runs, during the qualifier one of HBL PSL at the National Stadium in Karachi.

Openers Kamran Akmal and Imamul Haq provided their side with a decent start of 41 runs but the innings remained bereft of momentum as soon as the opening stand was broken.

The Zalmis had slipped to 90-5 but at this point Windies duo of Kieron Pollard and captain Darren Sammy got the team back in the contest with a scintillating partnership of 83 runs.

Sammy scored 46 off 21 balls while Pollard notched up 44 off 22 deliveries.

But the duo were dismissed in space of couple of deliveries and failed to take their team over the line.

Gladiators found themselves in a difficult spot as they lost their key spinner Fawad Ahmed due to injury, after he was hit on his face while bowling.  He was also taken to the hospital for further treatment.

Ahmed’s injury meant that Quetta had to rely on their part-time bowlers but they were lucky enough to eke out two wickets from these bowlers — Rilee Rossouw and Ahsan Ali.

Shane Watson, who only plays as a specialist batsman these days, was also called upon to bowl the crucial final over but he defended 21 runs and ensured that Gladiators reached their third final in four years.

Young pacer Mohammad Hasnain was the pick of the bowlers with figures of 2-28 in four overs.

Earlier Gladiators posted 186-6 in their allotted 20 overs, after Zalmi won the toss and elected to field first.

At one stage it seemed as if the Gladiators will post a total in excess of 200 but flurry of wickets at the backend of the innings ensured that they were restricted to a total less than they would have initially expected.

Despite losing opener Ahmed Shehzad (1) on the seventh ball of the innings, Gladiators got off to a solid start, courtesy Aussie Shane Watson’s brilliance at the top of the order.

Watson scored 71 runs off 43 balls with the help of five fours and six maximums. He compiled 111 runs for the second wicket with Ahsan Ali (46).

But as soon as Wahab Riaz got rid of Watson, things went pear-shaped for the Gladiators. They kept on losing wickets at regular intervals and stalled their progress towards a massive target.

For Zalmi, Riaz was the pick of the bowlers with figures of 2-26 in his four overs. His spell also included ten dot balls.

For his brilliant innings, Watson bagged the award for the player of the match.

While speaking at the post-match presentation ceremony, Watson spoke about the injury to Ahmed and how others bowlers had to step up and make up for it.

“Fawad Ahmed was not able to bowl so others had to step up,” he said. “Thankfully it all went well.”

He also spoke about his innings at the top of the order, which provided Gladiators with a good start.

“It was important to provide a good start and that’s what we did,” he said. “Also Ahsan Ali batted really well too.”

While talking about Gladiators recipe of success, he said: “We have a great squad and plenty of match winners which plays a crucial role in our success. Players put their hand up whenever needed.”