Aussie skipper Pat Cummins and Mitchell Starc suddenly turned it around for Australia, finding reverse swing during the last session of Day Three 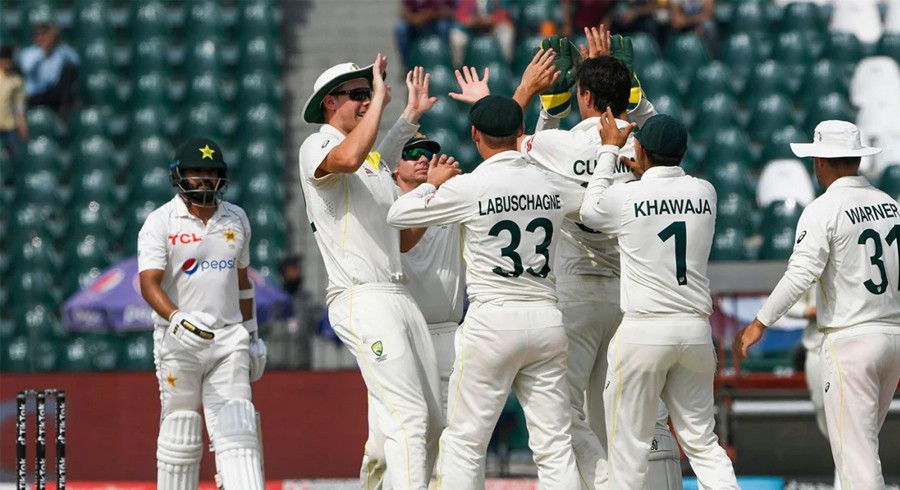 Pakistan veteran batter Azhar Ali spoke about the reason behind the batting collapse of the Men in Green, losing the last five wickets of the first innings for only four runs in Lahore Test.

Aussie skipper Pat Cummins and Mitchell Starc suddenly turned it around for Australia, finding reverse swing during the last session of Day Three.

Pakistan restricted Australia for 391 runs by picking up their last five wickets for 50 runs. The home team lost Imam-ul-Haq early, Azhar Ali (78), and Abdullah Shafique (81) fought back with a 150 run partnership for the second wicket.

The hosts were in a comfortable position at the end of the first session on day 3, but as soon as the Kangaroos managed to break the duo's partnership, the doors opened for the Aussies.

Babar Azam looked solid with his 67 run inning, but no other batter could stay at the crease. The Men in Green were bowled out for 268, losing their last seven wickets for only 20 runs.

"We have to give credit to them; we always know how good they are when it comes to reverse swing," Azhar stated at the end of day three.

"Cummins, he is the top bowler in the world right now. He exploited the conditions really well. It was hard work for the fast bowlers," Azhar added.

"But there was low bounce, and reverse swing was going on since yesterday. So they kept on hammering on the right areas and asking questions even to the set batsmen as well. Late in the day, there were some good results for them, It was lovely to see some good fast reverse swing bowling, but unfortunately, we were on the receiving end," Azhar further added.

Reaching the milestone of 7000 Test runs for Pakistan, Azhar faced 208 balls during his fighting knock of 78 in the first innings.

The right-handed batter was disappointed that he and Shafique could not get big hundreds after settling in on a wicket where a new batter will always struggle to adjust.

"I think there was no such message. If you bat on such wickets, then you have to bat long. Runs are harder to come by. We try to maximize our partnerships since the new batsman always finds it difficult to come and score on these wickets since the runs don't come quickly, and you're not set," Azhar stated.

"Especially reverse swing starts quickly... So I think the quality bowling that Australia has with Cummins and Starc in their ranks, they always trouble the new incoming batsman."

"We were trying that if any batsman was getting set, he should score big so that new batsmen find it difficult. So I think the moment partnership broke, the new batsmen found it hard to settle down." Azhar concluded.