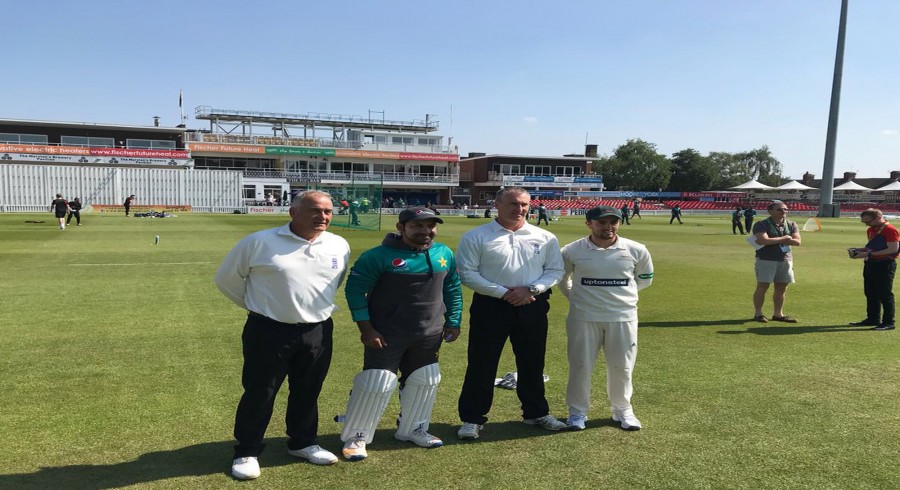 Pakistan’s opening pair Azhar Ali and Fakhar Zaman provided the team with an excellent start on the first morning of the tour match against Leicestershire.

Zaman lost his wicket on the stroke of lunch but before that the openers had already notched up a century stand. The visitors will resume their innings at 121/1 after the interval.

Both Ali and Zaman looked relatively at ease throughout the entire session and made the most of the opposing bowling attack, which lacked pace and venom.

Leicester’s skipper Lewis Hill used five bowlers during the opening session but Tom Wells was the only bowler who had the rub of green with the wicket of Zaman to his credit.

The batsmen initially looked circumspect as they saw off the new ball but changed gears towards the end of the session to put pressure firmly on their opponents.

Zaman dispatched fourteen boundaries on his way to 71 before being dismissed while a steady looking Azhar Ali remained not-out on 42.

Earlier Pakistan's skipper Srafraz Ahmed has won the toss and elected to bat first against Leicestershire at the Fischer County Ground.

The game is Pakistan’s final tour match before the two-Test series against England, which starts next week.

Pakistan has a chance to fine tune their skills before they lock horns with England, which won’t be an easy task by any stretch of the imagination.

Pakistan drew with Kent on the first side match of the tour while they won the next one against Northamptonshire in a convincing fashion by nine wickets. While in their only official match of the tour, against Ireland, the Men in Green won by five wickets on the final day of the Test match.

After the conclusion of the side match against Leicester, Pakistan will head to London for the first Test match at the historic Lord’s cricket stadium, which begins on May 24.