Rashid Khan was the pick of the bowlers for Lahore Qalandars, picking up five wickets 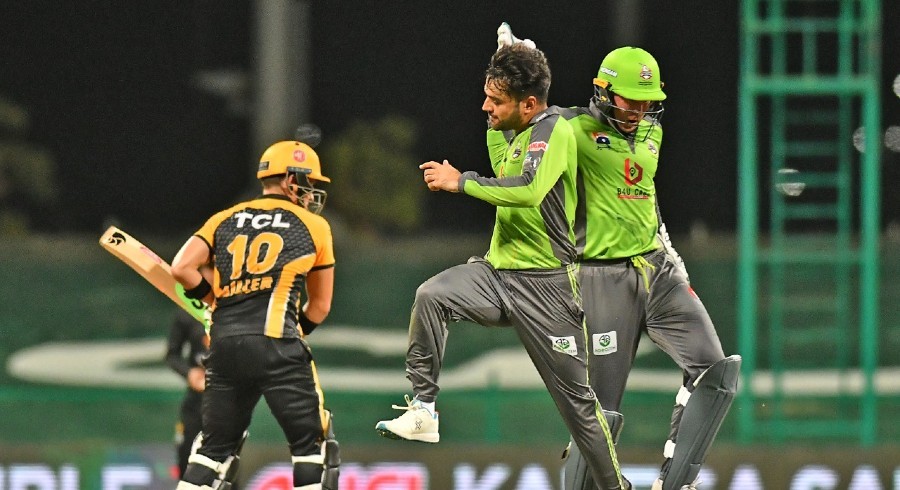 After setting a daunting target of 171 runs, Lahore Qalandars were off to a flying start with the ball as all-rounder James Faulkner removed openers Kamran Akmal (one off five) and Haider Ali (three off six) in the second over of the chase.

Batsman David Miller and veteran all-rounder Shoaib Malik then combined for a 51-run partnership off 44 balls as they hoped to resurrect Peshawar Zalmi’s chase.

Leg-spinner Rashid Khan, however, turned up the heat and bowled batsman David Miller after he had scored 21 runs off 23 balls.

Rashid then got rid of Rovman Powell for a duck as Lahore Qalandars piled on the pressure.

The leg-spinner then bowled batsman Sherfane Rutherford (15 off 10) before trapping batsman Fabian Allen LBW for a duck as Peshawar Zalmi’s chances of chasing the daunting total began to evaporate.

Tailender Wahab Riaz (17 off 10) became Rashid’s next victim as the leg-spinner completed a much-deserved five-wicket haul.

As wickets tumbled from the other end, Shoaib Malik played a lone hand in keeping his side’s hopes alive.

The veteran all-rounder finally fell in the ending stages of the match, hit wicket off the bowling of pacer Haris Rauf, after scoring 73 runs off 48 balls.

In the end the Peshawar Zalmi side could only manage 160 runs for the loss of eight wickets as Lahore Qalandars completed a 10-run victory.

Rashid Khan was the pick of the bowlers for Lahore Qalandars, picking up five wickets at the expense of 20 runs in his allotted overs.

Earlier, after winning the toss and choosing to field first, Peshawar Zalmi’s skipper turned up the heat with an incredible yorker, in the first over, that rattled the stumps of in-form opener Fakhar Zaman (one off three).

Pacer Umaid Asif picked up the big wicket of veteran all-rounder Mohammad Hafeez (two off six) next as Lahore Qalandars found themselves in significant trouble.

Batsmen Ben Dunk and Tim David stepped up for their side combining for a mammoth 81-run partnership off 50 balls.

Left-arm spinner Fabian Allen finally got the better of Dunk as the batsman was caught by fielder Umaid Asif after scoring 48 runs off 33 balls.

The hero of the last game Rashid Khan could not get going in this match and was quickly bowled by Fabian Allen after scoring just eight runs off seven balls.

All-rounder James Faulkner entered the match and smashed a much-needed 22-run knock of just seven balls, before being run-out, to give a massive boost to his side’s batting effort.

Batsman Tim David, however, was the star of Lahore Qalandars’ innings playing a blinding knock of 64-runs off 36 balls to push his side to 170 runs for the loss of eight wickets in their allotted overs.

Fabian Allen was the pick of the bowlers for Peshawar Zalmi after taking two wickets.

LIVE: Pakistan on top against Netherlands in second ODI