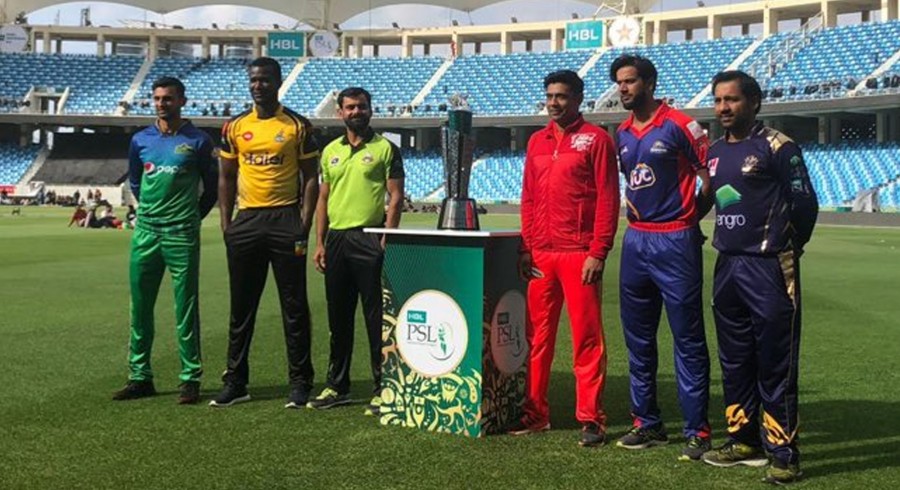 The Pakistan Super League (PSL) trophy was unveiled at the Dubai International Stadium, ahead of the fourth edition.

On this auspicious occasion, Pakistan Cricket Board (PCB) Chairman Ehsan Mani, Managing Director Wasim Khan, captains and owners of all six franchises — except for Quetta Gladiators’ Nadeem Omar — were present.

“The PSL 2019 is set to provide incredible excitement to cricket fans all around the world; we thank our sponsors, partners, the six franchises and all stakeholders who have contributed in putting together this cricket extravaganza. We look forward to seeing a competitive tournament with a galaxy of international and Pakistan stars showcasing their talent,” said Mani.

Ahead of the trophy unveiling ceremony, a joint press conference, involving captains from every team, was held.

Speaking on this occasion Quetta Gladiators captain Sarfaraz Ahmed said: “We have come close to winning the title in the previous editions but hopefully we will go one step further and win the title this year.”

Skipper of Lahore Qalandars Mohammad Hafeez said: “We want to remove the tag of always being the last team on the points table by putting up a good show in the fourth edition of PSL.”

Captain of Karachi Kings Imad Wasim said: “I did not take part in the entire tournament last year due to injury but hopefully, under leadership of Wasim Akram, we will fulfil the dream of winning the title this year.”

Newly-appointed captain of defending champions Islamabad United, Mohammad Sami said: “It’s an honour for me to lead the franchise. I will try to guide the side to its second consecutive title.”

Skipper of Multan Sultans, Shoaib Malik said: “We started the previous tournament well but lack of consistency hampered our campaign. We will try not to repeat the same mistakes this year.”

Captain of Peshawar Zalmi Darren Sammy said: “Every team has a well-balanced squad, especially Lahore Qalandars, but we won’t go down without a fight.”

The fourth edition of PSL will begin on February 14, 2019 in the United Arab Emirates (UAE), with the last eight matches of the tournament scheduled to take place in Pakistan — including the final in Karachi on March 17.