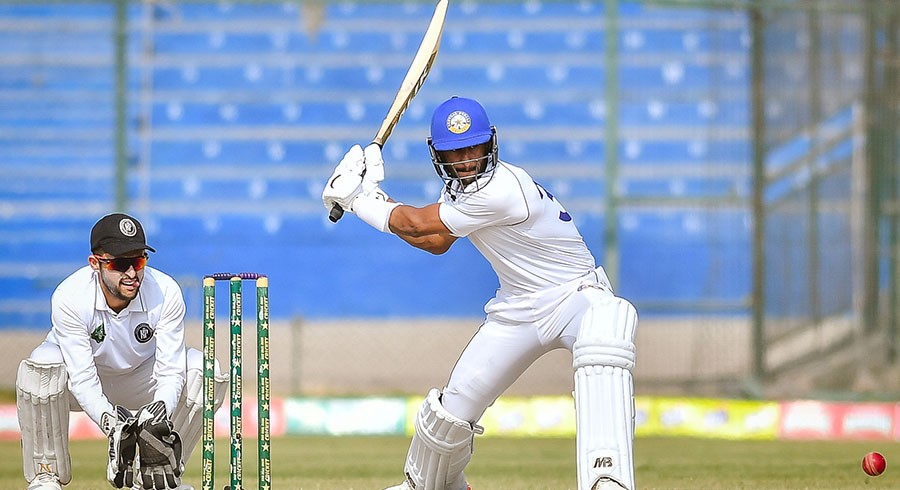 Hasan Ali’s scintillating century resulted in the final of the first-class Quaid-e-Azam Trophy 2020-21 ending in a dramatic tie and Central Punjab, the title defenders, and Khyber Pakhtunkhwa sharing the coveted trophy at the National Stadium on Wednesday.

The Central Punjab captain blasted to his maiden triple-digit score in first-class cricket as he scored 106 not out from just 61 balls. Hasan’s stay at the crease was studded with 10 fours and seven sixes.

He arrived at the crease in the first over after Lunch with Central Punjab 154 runs away from the 356-run target with four wickets in hand and Khyber Pakhtunkhwa dominating the proceedings.

The 26-year-old turned the tide quickly into his team’s favour as he spanked Sajid Khan, the highest wicket-taker of the season with 67 scalps at 25.09 runs per dismissal, for two sixes and three fours in the 102nd over, before smashing pacer Irfanullah Shah for a six and a four in the next over.

He crossed the 50-run mark with a massive six off Arshad Iqbal on his 27th ball and brought up his century on 58th delivery.

Hasan won the Best Player of the Tournament award for his all-round contribution in Central Punjab’s epic resurgence, which saw them win four of their last five group-matches and play the final of the competition after being at the bottom of the six-team points table at the half-way stage. He took 43 wickets – the most for a pacer – in nine matches at 20.07 and scored 273 runs, which also included two half-centuries, at 24.82.

He was also named Player of the Final.

Over the course of his stay, Hasan stitched a match-defining partnership of 70 runs from 50 balls with Ahmed Safi Abdullah, who made 35 from 23 balls, after he had spearheaded a 47-run stand for the eight-wicket with Bilawal Iqbal (seven off 18 balls).

With the scores tied, Waqas Maqsood, in his attempt to clear the mid-on fielder, handed a catch to Kamran Ghulam off Sajid as the match ended in a dramatic finish in the afternoon session of the final day’s play.

Khyber Pakhtunkhwa had gotten off to a perfect start with Arshad accounting for Mohammad Saad in the first over of the day. Five overs later, Sajid, the off-spinner who was named the Best Bowler of the Tournament, dismissed Saad Nasim, which compounded Central Punjab’s woes.

Usman Salahuddin, the top-scorer for Central Punjab till that stage with 202-ball 67 was the next batsman to be dismissed which left the batting side with half of their batting line-up back in the pavilion at the score of 179.

Sajid with four for 86 was once again the standout bowler for Khyber Pakhtunkhwa, while Arshad took three wickets for 100 runs.

Kamran Ghulam, who set the record for most runs in a Quaid-e-Azam Trophy season on Sunday during his fifth century of this edition, was named Best Batsman of the Tournament, while his Khyber Pakhtunkhwa teammate Rehan Afridi (35 dismissals in 11 matches) won the Best Wicketkeeper of the Tournament award.

Brilliant game of Cricket. What an innings @RealHa55an
Congratulations to everyone involved in this outstanding season.
Top notch work 👌#QeA20Final #QeA20

What a champion @RealHa55an. Electricity is temporary, generator is permanent. Love you mere bhai pic.twitter.com/1ZzfYunSst

There have been over 60,000 First Class Matches played in history. This is only 67th TIED match ever. 355 is fourth highest total in a tied chase. #QeA20Final

The hardwork half fit hassan ali has put just shows his dedication towards the game. 106 of 61 with 7 sixes and 10 fours and stays not out. Brought his team back to the game from nowhere.

Love the energy Hassan Ali puts in the side. A team that was nearly knockout of the tournament, made it to the final, where they were down and out & then Hassan Ali lifted them up again. What a champion! 😍😍