Root and Bairstow keep England on course for record chase

Root, batting on 76, combined with Bairstow in a 150-run stand for the unbroken fourth wicket to put England's chase back on track 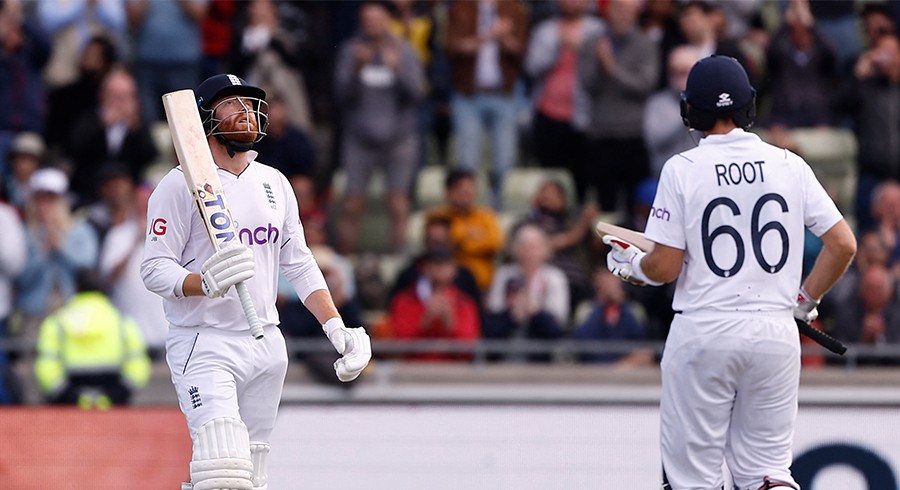 Joe Root and Jonny Bairstow smashed unbeaten fifties to boost England's hopes of pulling off a record chase in the rearranged fifth Test against India at Edgbaston on Monday.

Chasing 378 for victory, England got off to a flying start before the loss of three quick wickets forced them on to the back foot.

Root, batting on 76, combined with Bairstow in a 150-run stand for the unbroken fourth wicket to put England's chase back on track.

England were 259-3 at stumps needing 119 for a series-levelling victory on Tuesday.

Bairstow, dropped on 14 in the slip, followed his first-innings century with a belligerent 72 not out.

England's highest successful run chase came in 2019 when they reached a 359-run target in an Ashes Test against Australia on the back of Stokes's brilliant unbeaten century.

Openers Alex Lees (56) and Zak Crawley (46) championed the attacking brand of cricket which is becoming the hallmark of the England Test team since Brendon McCullum took over as the head coach and Ben Stokes assumed the captaincy.

They reached the 100-mark inside 20 overs with Lees racing to a 44-ball fifty before Jasprit Bumrah intervened.

Minutes before the tea break, Crawley decided to leave a Bumrah delivery which jagged back to hit the top of his off-stump.

The seamer struck again with the first delivery after the break when he had Ollie Pope caught behind for duck.

India wasted two reviews trying to get Root lbw and Bairstow got a life early in his innings when Hanuma Vihari spilled an edge in the slip.

Earlier, Stokes (4-33) ran through India's lower order and bowled out the tourists for 245.

Rishabh Pant followed his first-innings 146 with 57, and opener Cheteshwar Pujara contributed 66 for India.

Crawley spilled a difficult catch at slip but Pant, then on 45, could not capitalise on the reprieve.

The left-hander perished attempting a reverse-sweep against left-arm spinner Jack Leach and Root took a sharp catch at slip.

England subjected India's lower order to a bouncer barrage on a pitch with variable bounce and Shardul Thakur suffered painful knocks on the helmet by successive short deliveries by Matthew Potts.

The tourists are 2-1 up in the series which could not be completed last year following COVID-19 cases in the India camp ahead of the final match at Old Trafford.