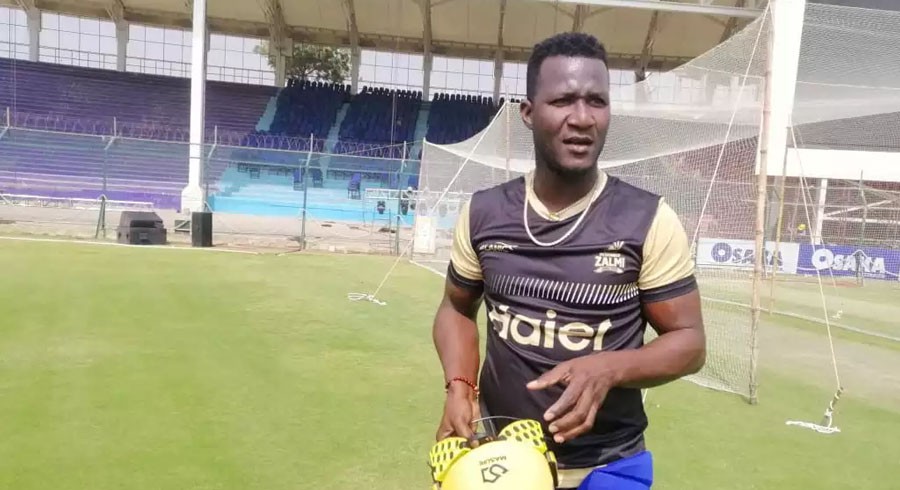 Peshawar Zalmi’s Daren Sammy has arrived in Pakistan and is gearing up for the fifth season of Habib Bank Limited (HBL) Pakistan Super League (PSL), due to begin from February 20 in Karachi.

While speaking to reporters in Karachi on Thursday, the Saint Lucian cricketer was excited to see the entire tournament being held in Pakistan for the first time.

“I want PSL5 to be the best out of all the previous seasons. Let us as cricketers and fans showcase to the world how great it is to play cricket in Pakistan,” Sammy said. “As you could see, I am first one to be here. In 2017 when the final was in Lahore, it was a step in bringing cricket back in Pakistan and now to have the entire tournament here in 2020 is just amazing.”

“I can’t wait to play in front of the Pakistani fans. Pakistan players have particularly missed playing in front of their home fans so it means a world to everybody,” he added.

The hard-hitting all-rounder took part in an intense training session at National Stadium, Karachi and is focused towards claiming the second PSL title for Peshawar Zalmi.

“Peshawar Zalmi’s strength has been their teamwork over the years. This year is not going to be different,” he said. “We have been to three consecutive finals. We have lost the last two, so this year we want to go all the way, but it is going to take team effort.”

Sammy also revealed the secret behind his recent tweets in Urdu, which surprised his fans in Pakistan.

“I have my google translator, so I type it in English and it translates into Urdu or Pashto,” he said.

The 36-year-old is eagerly waiting for this season’s opening ceremony in Karachi and said that people can expect some dance moves from him.