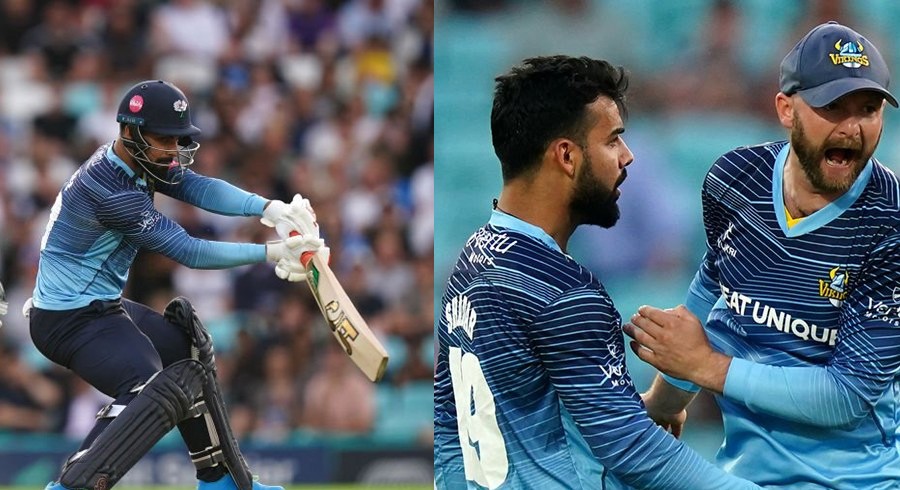 Pakistan's limited-overs vice-captain Shadab Khan starred for Yorkshire against Surrey in the quarter-final of T20 Blast 2022.

The 23-year-old stroked 21 off 12 balls while also bagged figures of 2/29 in Yorkshire's one run win over Surrey at The Oval.

It was Jordan Thompson, who held his nerve to defend five runs off the final over and send Yorkshire through to Blast Finals Day.

The home side looked firm favourites to reach Edgbaston after a fiery partnership of 67 from 35 balls between Jamie Overton and Laurie Evans had taken them to the verge of victory.

But Overton was run out by wicketkeeper Tom Kohler-Cadmore - whose knock of 62 from 48 had anchored the Vikings' total of 160-5 - and Thompson removed Sunil Narine next ball before conceding only a bye off the final delivery.

With Chris Jordan away on England duty, Will Jacks stood in as Surrey captain and led by example, sending down four consecutive overs for just 20 after he had opted to put the Vikings in

They lost both openers inside the first nine deliveries, with Adam Lyth slapping Jacks to the diving Overton at short cover and Finn Allen perishing when the same fielder clasped a skier off Dan Worrall.

Kohler-Cadmore and David Willey rebuilt with a partnership of 93 from 80 balls, although they took their time to get going, finding the boundary just four times during the first half of the innings.

Apart from a Dan Moriarty over that went for 16, with both batters clubbing the spinner straight back over his head into the pavilion, Yorkshire struggled for momentum and Willey (30) eventually holed out to long-on off Narine.

Kohler-Cadmore departed next over in identical fashion, but some inspired hitting from Shadab Khan (21 from 12) and Will Fraine, who ended unbeaten on 32 from 14, ensured the visitors posted a competitive total.

Willey almost struck with the first ball of Surrey's reply as Jacks nudged him to point, where Jonny Tattersall stretched and failed to hold on, but the Vikings skipper did take his opposite number's scalp later in the over courtesy of a top edge to third man.

However, Rory Burns and Tom Curran regained the initiative by savaging Matt Revis - whose second over cost 22 - and Yorkshire quickly turned to spinners Shadab and Dom Bess to plug the flow of runs.

The pair succeeded in that task, with Shadab (2-29) also picking up the valuable wickets of Burns - bowled for 28 - and Ollie Pope, who swept him into the waiting hands of deep square leg as Surrey began to lose their way.