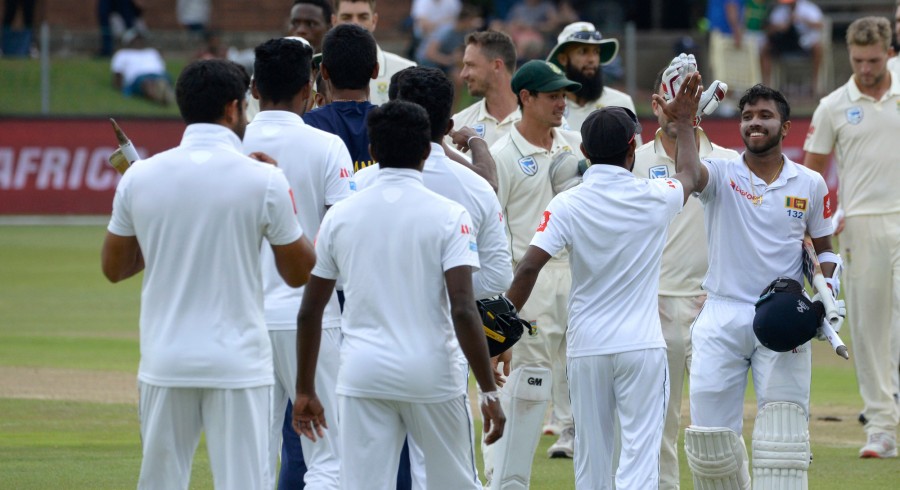 Oshada Fernando and Kusal Mendis propelled Sri Lanka to an eight-wicket win on the third day of the second Test, playing exactly the sort of cricket that Karunaratne wanted.

"We told them, 'play your normal game, if you can hit over the fielder go for it'," said Karunaratne after the unheralded Sri Lankans became the first team from Asia to win a Test series in South Africa.

Fernando (75 not out) and Mendis (84 not out) attacked the South African bowlers from the start of play on Saturday, taking Sri Lanka from an overnight 60 for two to the victory target of 197 in just over two hours of uninhibited stroke play.

"When you play like that, South Africa are on the back foot," said Karunaratne.

Appointed only as an "interim" captain, Karunaratne said he had a simple message for his players when he took over at a time of apparent turmoil in Sri Lankan cricket.

"When I started, I said to my boys, 'whatever happens you have to keep smiling, keep enjoying. If you're not enjoying you don't get to a hundred percent'."

Remarkably, the Lankans consistently played positive cricket despite having been away from home for the better part of three months.

They arrived after two heavy Test defeats in Australia, which led to Dinesh Chandimal being fired as captain, coach Chandika Hathurusingha having his powers curtailed and major changes in personnel, some caused by injuries.

The tourists' attitude clearly flummoxed the South Africans, especially on Saturday morning when the uninhibited batting of Fernando, playing in his second Test, and man of the match Mendis turned what had been expected to be a tense struggle to a romp for the tourists, with South African captain Faf du Plessis having to change his fields and frequently rotate bowlers who were unable to break through or stop the flow of runs.

Karunaratne praised the contribution of his bowlers, notably the inexperienced Vishwa Fernando and Kasun Rajitha, who took 12 and nine wickets respectively over the two matches.

"Our bowling line-up did a really good job, especially the youngsters," he said.

Du Plessis described the series loss as "my biggest low as a player in the Proteas team".

He said he was particularly disappointed with South Africa's batting, which sank to new depths when they were bowled out for 138 in the second innings, despite Sri Lanka being without injured left-arm spinner Lasith Embuldeniya.

Du Plessis said he was at a loss to explain how 31 wickets fell on the first two days.

"When I was batting in both innings I felt it was a really good batting pitch," he said. "Mentally we were a bit soft in giving wickets away pretty easily."

Sri Lanka made it four wins in a row against South Africa after winning two matches at home last year.

"They have been better than us home and away," admitted Du Plessis. "We were outplayed in their back yard but there's no excuse when Sri Lanka come here."

Kusal Perera, whose 153 not out took Sri Lanka to a dramatic, unexpected one-wicket win in the first Test in Durban, was named man of the series.

Sri Lanka's series win was one of the biggest upsets in recent cricket history.

South Africa had won their previous seven series at home and had won 16 out of 19 home Tests, with only two defeats, before losing in Durban.

Sri Lanka, by contrast, had lost six and drawn one of their previous seven Tests before arriving in South Africa.

South Africa had won 19 of 21 previous home series against Asian opponents, with the only exceptions being when India and Pakistan shared one series each.