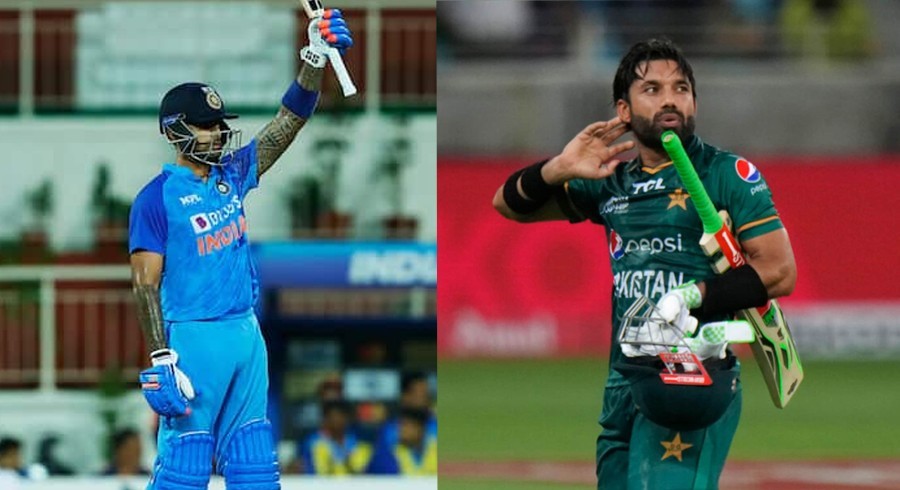 The battle to be the No.1 ranked T20I batter in the world has further intensified after India star Suryakumar Yadav edged even closer to Pakistan opener Mohammad Rizwan on the latest ICC Men's Player Rankings.

Yadav continued his stunning rise in 2022 by finishing India's recent T20I series at home against South Africa with two half centuries and as their leading run scorer with a total of 119 runs.

That form saw Yadav close to within 16 rating points of Rizwan on the updated T20I batter rankings that were released by the ICC on Wednesday and the 32-year-old should get the chance to claim top billing during the upcoming ICC T20 World Cup in Australia.

Rizwan finished the recent seven-match T20I series against England as the leading run scorer with an impressive haul of 316 runs, but the fact the veteran was rested for the sixth game of the series and managed just one in the series decider in Lahore meant the right-hander lost valuable breathing space at the top of the rankings.

The race for the top spot is so tight that Yadav could have even overtaken his Pakistan counterpart with a big score in the final match of India's series against South Africa in Indore, but the right-hander was out for just eight.

It means the battle between the two will continue over the next month when both Pakistan and India are among the favourites to win the eighth edition of the T20 World Cup in Australia.

Pakistan captain Babar Azam remains third on the latest T20I batter rankings and should not be discounted from re-claiming his place at the top, while a host of other batters from around the world made giant strides on the latest set of rankings.

India opener KL Rahul jumps seven spots to 14th on the updated list on the back of his 108 runs from two matches against the Proteas, while South Africa trio Quinton de Kock (up eight spots to 12th), Rilee Rossouw (up 23 places to 20th) and David Miller (up 10 spots to 29th) were also eye-catching movers.

Reliable top-order performer Dawid Malan rises one spot to fifth after a consistent series for England against Pakistan, with team-mate Ben Duckett (up eight spots to equal 24th) also on the improve.

While Australia seamer Josh Hazlewood maintains top spot on the updated list for T20I bowlers, there is some re-shuffling behind him following the completion of two recent series in India and Pakistan.

The spin-dominated top 10 has a new entrant, with South Africa tweaker Keshav Maharaj jumping seven spots to 10th overall following an impressive series against India that netted the 32-year-old four wickets at an economy rate just greater than seven.

There was a minimal change inside the top 10 on the latest list for all-rounders, with India dasher Hardik Pandya dropping one spot to fifth overall as Afghanistan veteran Mohammad Nabi maintained his place at the top.