The match is being played at National Stadium, Karachi 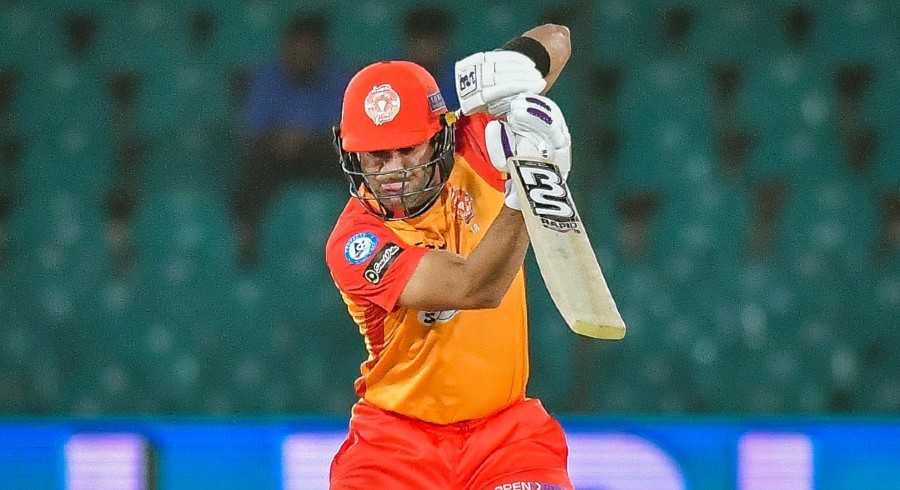 The tradition of teams chasing the target successfully continued in sixth season of HBL PSL as Islamabad United defeated Karachi Kings by five wickets on Wednesday at National Stadium Karachi.

Islamabad needed Hales to take charge and the Englishman responded by hitting Amir Yamin for 29 runs in the third over, which proved to be the most expensive in PSL history.

United promoted Faheem Ashraf to number four and the all-rounder completed a fifty-run partnership with Hales in just 16 balls. The aforementioned partnership was taking the game away from Karachi until left-arm pacer Waqar Maqsood dismissed Hales for 46 just before the end of powerplay.

Karachi’s player of the match from last match, Arshad Iqbal, clean bowled Faheem Ashraf for 25, to leave United reeling at 82-4.

Iftikhar Ahmed and Hussain Talat provided much-needed stability in the middle overs for United as they completed fifty run partnership in the 13th over, taking United closer to the target.

With United needint 60 runs in 6 overs, the duo started accelerating as Nabi tried his best to apply the brakes. Nabi was finally rewarded for bowling immaculate lines as he trapped Talat lbw for 42, as United still needed 21 from 14 balls.

Hard-hitting batsman Asif Ali scored the required 21 runs all by himself in just 9 balls, to take United over the finish line.

Sharjeel struggled to get going early, scoring only 6 runs in his first 17 balls, which included a boundary. On the other end, Babar Azam was dealing mostly in boundaries as he hit five boundaries in the powerplay, taking Karachi to 33 for no loss.

Shadab introduced himself in the attack after the powerplay and Sharjeel took the opportunity to go big, hitting the leg-spinner for a boundary in his first over. However,  the real entertainment for the crowd came in the second over of Shadab, as Sharjeel hit the United captain for four consecutive sixes in the 9th over of the innings, taking the score to 80-0 in 9 overs.

Shadab brought the player of the match from their last game, Lewis Gregory, into the attack, but to no avail as Sharjeel carved a slower delivery through the third man area for a boundary, to bring up his fifty in just 32 balls.

The message was clear from Imad after the timeout as Sharjeel tried to hit Zafar Gohar out of the park on every ball, as the left-arm spinner conceded 17 runs in his second over.

Iftikhar Ahmed came in next to counter Sharjeel but Babar took advantage and hit the part-time spinner for a six, completing his fifty in 38 balls.

Mohammad Wasim almost provided the breakthrough for Islamabad with Karachi on 124, however the right-arm pacer had overstepped the line, giving a life to Sharjeel. If that wasn’t enough, Hussain Talat overstepped as Babar was caught in the deep in the 15th over.

With Karachi on 140-0 after 15 overs, they needed both their openers to change gears and Sharjeel complied as the duo broke the previous record for highest partnership (157), between Babar Azam and Liam Livingstone, in PSL.

The left-hand opener wasn’t done as he brought his second PSL century in just 55 balls by hitting all-rounder Faheem Ashraf for a six in the 18th over. United finally got a breakthrough in the second last over as Babar was run out for 62. Sharjeel followed suit as he was trapped lbw by Hasan Ali on the next ball.

Late cameo of 12 runs by Daniel Christian ensured the highest PSL total for Karachi this season.