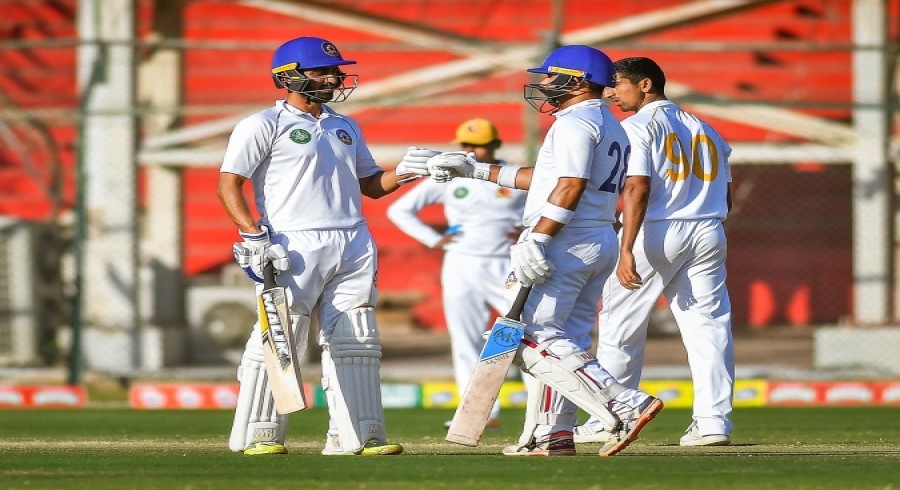 Central Punjab had a strong 280-run second innings lead over Sindh when the second day’s play of the sixth round of first-class Quaid-e-Azam Trophy came to an end at the National Stadium on Thursday.

Central Punjab’s bowlers, helped by Waqas Maqsood’s scorching six for 25, dismissed Sindh for a paltry 92 in 29.3 overs in the fixture being broadcast on PTV Sports and beamed all around the globe through PCB’s YouTube Channel.

This was Waqas’ 11th five-wicket haul in first-class cricket.

The 33-year-old accounted for both Sindh openers – Sharjeel Khan (14) and Omair Bin Yousuf (four) – before sending Tabish Khan (nine), Mir Hamza (16), Abrar Ahmed (0) and Shahnawaz Dhani (0) back to the hut.

Title defenders Central Punjab, who are currently at the bottom of the six-team points table, bagged all six bonus bowling points – three for taking eight wickets and the other three for dismissing the opposition under a score of 200 inside 100 overs.

Bilawal Iqbal took two wickets for 17 runs, while the Central Punjab captain Hasan Ali took one wicket from his 13 overs.

In their second innings, Central Punjab were 96 for five thanks to a fighting half-century from Muhammad Akhlaq, who is featuring in his first first-class match of the 2020-21 domestic season.

Akhlaq, the 28-year-old right-handed batsman scored 56. He smashed 10 of the 77 balls he faced for boundaries before he was dismissed by Abrar Ahmed, who took two wickets in the only over he bowled in the innings.

Abrar, called on to bowl by Sindh captain Asad Shafiq, on the verge of stumps also dismissed Qasim Akram (0) which saw Central Punjab slip from 95 for three to 95 for five.

This was the second instance in the innings that Sindh took two wickets in an over as pacer Mohammad Umar dismissed Usman Salahuddin (14) and Mohammad Saad (0) inside one over earlier in the evening session.

Saad Nasim (14 not out) and Ali Shan, who is yet to open his account, will resume Central Punjab’s innings on Friday.

Earlier, Central Punjab added 44 runs in the morning session before they were bowled out for 276.

They were 269 for eight at the completion of the 100th over which helped them bag two bonus points for batting. As such, Central Punjab gathered a total of eight bonus points, while Sindh added only three (all for bowling).

With an unbeaten 26, Hasan was the only notable contributor with the bat in the first innings on day two.

The 31-year-old left-handed batsman scored 102 runs in an innings studded with 11 fours and two sixes.

Over the course of his 150-ball stay at the wicket, Umar stitched a 103-run partnership with Mohammad Nawaz (43 off 61 balls, four fours) to help Northern post an imposing 381 all out.

Hammad Azam scored 91 runs at almost run-a-ball as he struck 13 fours and two sixes in the 95 balls he faced.

Openers Sarmad Bhatti, who resumed the day on six not out, and Nasir Nawaz added 52 runs for the opening wicket.

The other notable contribution came from Munir Riaz, who batted at number 10 and was not out on 23.

Northern added four more bonus points to their tally as they scored in the slab of 350-399 before they were dismissed inside 100 overs. On Wednesday, they had bagged four bonus points for bowling.

Southern Punjab got five bonus points – two for batting and three for bowling.

Southern Punjab, who were bowled out for 285 in the first innings, had scored 19 runs without the loss of any wickets in six overs, before the stumps were drawn.

Their openers Zain Abbas (seven not out) and Zeeshan Ashraf (12 not out) will resume the third day’s play with a 77-run second innings trail to surmount.

Khyber Pakhtunkhwa bagged the maximum (six) bowling bonus points on offer as they dismissed Balochistan for a measly 120 in 33 overs at the State Bank Stadium. Khyber Pakhtunkhwa have a healthy second innings-lead of 298.

With four wickets for 41 runs from 12 overs, Irfanullah was the pick of the bowlers. Featuring in his first first-class match of the 2020-21 domestic season, the 25-year-old dismissed Balochistan’s top-three batsmen – Azeem Ghumman (three), Awais Zia (28) and Ali Waqas (0) – before returning to send Kashif Bhatti (three) back to the hut.

Mohammad Wasim and Sameen Gul equally shared the remaining six wickets between them.

Balochistan were tottering at 26 for four, before a half-century by Bismillah Khan. The wicketkeeper-batsman, whose only century in the ongoing season had come against the same opposition in the first round of the ongoing tournament, was unbeaten on 50 off 60 balls, which included six fours and a six.

Khyber Pakhtunkhwa have pocketed nine bonus points (three for batting and six for bowling) after the second day’s play. For failing to breach the 200-run mark in their first innings, Balochistan failed to add any bonus points to their tally of three (for bowling) from the match.

Khyber Pakhtunkhwa had scored 98 for three in the 37 overs they have faced in their second innings before the close of play. Fifty of those runs came off Israrullah’s bat, as the opener scored his 28th half-century.

Israrullah was unbeaten on 50 and faced 101 balls, in which he hit four fours and two sixes.

Earlier, Kamran Ghulam added 23 runs to his overnight score of 130 as the middle-order batsman made 153 from 253 balls. His knock, which stretched over four sessions, included 18 fours and two sixes. He was dismissed by Khurram as Khyber Pakhtunkhwa were bowled out for 320 in the first innings.