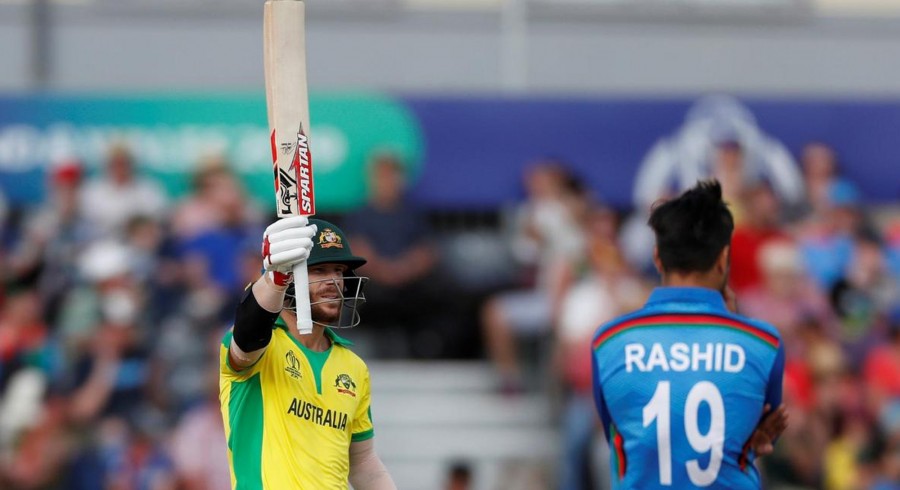 David Warner defied the boo-boys to hit an unbeaten half-century on his official return to international cricket on Saturday as Australia began their World Cup title defence with a seven-wicket victory against Afghanistan.

The five-time champions dismissed Afghanistan for 207 in 38.2 overs on a warm day in Bristol and then made steady progress, reaching their target with more than 15 overs to spare, with Warner 89 not out.

The match was the first official Australian appearance in any format for Warner and former captain Steve Smith since the end of their year-long bans for ball-tampering.

The crowd booed the pair and two fans watched the game from a balcony dressed as sandpaper in reference to the scandal last year in which Australia hatched a plot to use the material to alter the condition of the ball.

"It's good to be back and it's a good win for us," said man-of-the-match Warner at the presentation ceremony. "There were nerves getting back into the camp and getting back into the full intensity of training, but to come out and bowl the way we did helped us set the tone with the bat. It's a positive victory and now we move on to the West Indies....There's a great buzz about this team at this moment."

Left-handed Warner opened the batting with captain Aaron Finch in the evening sunshine but it was the skipper who set the tone, reaching his fifty off 40 balls with three sixes.

Warner, not at his belligerent best, had a narrow escape when he was on 19, scrambling back after chopping a delivery and losing sight of the ball as wicket-keeper Mohammad Shahzad whipped off the bails.

Finch mistimed a slower ball from Afghan skipper Gulbadin Naib when on 66, holing out to Mujeeb Ur Rahman at deep cover and smashing his bat into his pads in frustration.

Warner, 32, found his touch as he neared his fifty, reaching the mark off 74 balls and raising his bat to of a chorus of boos.

The dismissal of Usman Khawaja by Rashid Khan brought Smith to the wicket and he too was given a rough ride by the crowd.

Smith was dismissed in tame fashion, caught by Hazratullah Zazai off the bowling of Mujeeb for 18 with the end in sight and had to endure more boos and apparent shouts of "cheat" as he left the field.

Earlier, Naib took the bold decision to bat in the southwest of England, hoping to post a score his spin bowlers could defend on the small ground.

But the move backfired badly, with openers Mohammad Shahzad and Zazai departing for ducks as Afghanistan slipped to five for two in the second over.

Rahmat Shah (43) and Hashmatullah Shahidi led a fightback for the minnows, playing in only their second World Cup, putting on a gritty 51 for the third wicket.

Rank outsiders Afghanistan were again wobbling badly at 77 for five but Najibullah Zadran, who scored 51, took the fight to his illustrious opponents, smashing 20 runs in four balls off leg-spinner Adam Zampa, including successive sixes.

The big hits brought the small knots of Afghan supporters to their feet and a line of flag-waving fans ran along the front of one of the stands.

Rashid Khan enjoyed a late flourish but Afghanistan were all out with more than 11 overs of their innings remaining.

Naib said: "Australia are a champion side so you can't have any mistakes. When we didn't have a good start I did fear the worst slightly. We were on the back foot but Rahmat Shah batted well."