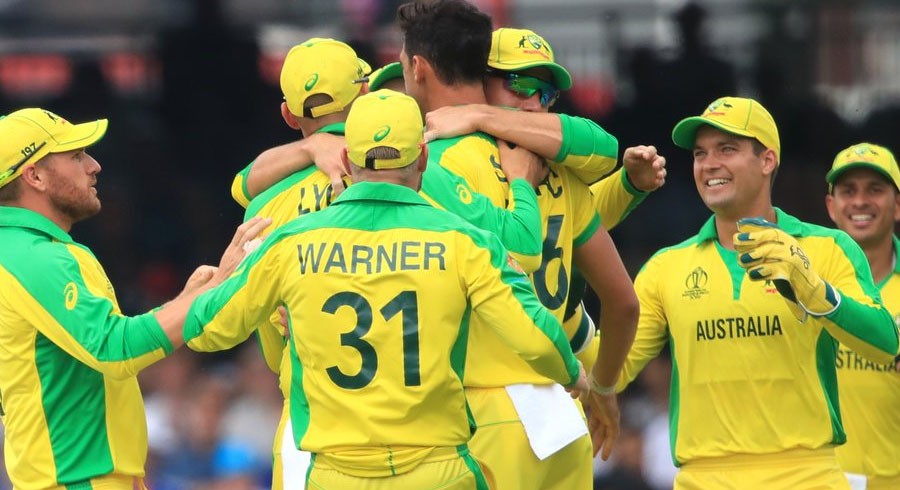 Australia cruised to victory by 86 runs against New Zealand at Lord's on Saturday, with batsman Usman Khawaja and pace spearhead Mitchell Starc starring for the defending champions.

Aaron Finch's team, already through to the last four from the 10-team round-robin stage, were wobbling at 92-5 after winning the toss on a hot day.

But Khawaja (88), who received fine support from player of the match Alex Carey (71) steadied the ship before he became the first victim of a last-over hat-trick from left-arm paceman Trent Boult as Australia finished on 243-9.

It proved more than enough, as New Zealand slumped to 157 all out with 38 balls to spare.

Jason Behrendorff (2-31) removed both the New Zealand openers before Starc — the tournament's leading bowler — cleaned up with 5-26.

New Zealand captain Kane Williamson, who scored 40, could not repeat his heroics from earlier in the tournament as the Black Caps' chase failed to take off.

They still have not confirmed their place in the semi-finals with one match to go but if England lose to India in Birmingham on Sunday, New Zealand will be in the last four before they face the tournament hosts in their final group match.

"It was not the start we wanted but Uzzie (Khawaja) was out there occupying the crease," said Carey. "I went out and assessed conditions and tried to bat time and go as deep as possible. Credit to Usman as well, he batted a long time in that heat and Mitchell Starc closing it out with the ball."

Australia's first-wicket pair have been central to their success at the World Cup, with Finch and David Warner having scored 657 runs together in eight matches, including Saturday's fixture, at an average of 82.12.

But they both fell cheaply against New Zealand and Steve Smith fell for five after Martin Guptill held a sensational diving catch off the bowling of Lockie Ferguson.

Warner and Smith were booed on and off the field following their recent return to international cricket after they were both banned for 12 months for their roles in a ball-tampering scandal.

Jimmy Neesham then struck twice to reduce Australia to 92-5.

The collapse allowed Khawaja to bat in his usual style without fear of being criticised for slow scoring.

Khawaja was bowled in the final over by Boult to end a 129-ball innings featuring just five fours. Boult then bowled Starc and dismissed Behrendorff lbw with a yorker.

It was the first hat-trick by a New Zealander at a World Cup and the second of the tournament after India's Mohammed Shami achieved the feat against Afghanistan.

Boult finished with 4-51 at a sun-drenched Lord's after he had earlier removed Finch.

Behrendorff then carried on from where left off with a career-best 5-44 in Australia's 64-run win over England at Lord's on Tuesday.

He had the unlucky Henry Nicholls, selected in place of dropped opener Colin Munro, caught behind down the legside for eight and then had Guptill lbw for 20.

Williamson was caught behind trying to run Starc to third man to leave New Zealand 97-3 in the 26th over and Ross Taylor exited for 30.