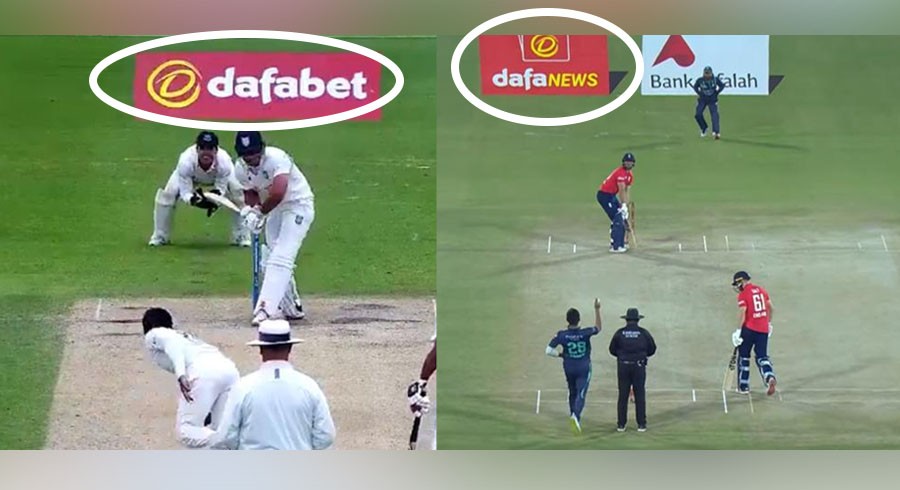 There are hints of surrogate advertising for the Pakistan-England T20I series, where a sponsor's logo is identical to that of a betting company.

As per details, Dafa News is the sponsor of the ongoing series between Pakistan and England. People believe the website mentioned above belongs to the betting company "Dafa Bet". If one looks at their social media profile, the site seems to belong to India.

The betting companies tend to replace bet with news where the laws of a country do not allow advertising betting sites.

Even before this, during Pakistan's home series and PSL, various betting companies have sponsored by changing the name slightly.

At one point, bets were being received on the news website where the link of a betting website was live-streamed, however, PCB took strict notice on the identification of media. This method is called surrogate advertising.

At the time the advertisement was issued to sell various rights to Pakistan Cricket, it was clear that betting websites would not be allowed to advertise.

A team official had a serious discussion with him about this, but Ramiz had made it clear that he would not allow it to happen in any case, but now it is surprising to have it happen in a home series.

During the series of Zimbabwe and Bangladesh, there was a big advertisement of "Dafa Bet" and then the same advertisement is now seen in the Pakistan-England series, the only change is they have written news instead of bet.

Pictures and questions were sent to Ramiz Raja to know the position regarding surrogate advertising, but no response was received after more than 24 hours.

A PCB spokesperson said that there is no such thing as surrogate advertising, Dafa News is a news website and is not affiliated with any betting website.

He said that PCB has a zero-tolerance policy in this regard, no company involved in betting or any such activity can sponsor Pakistan cricket. He further added that they are not concerned at this stage.

It must be noted that in the past, when a report was published in this regard, PCB had given a similar position, However, even if the company's words are to be accepted, questions like not changing the almost identical logo and Dafa News not taking any action against Dafa Bet still need clarification.

This step of the board has raised many questions after PSL franchises were inducted to not surrogate advertising.

Sources said there was a discussion on the team owners' WhatsApp group in the past few days; an explanation was also sought from the PCB, but no response has been received. The franchises want to have a clear policy in this regard.