Wahab Riaz was the pick of the bowlers for Peshawar Zalmi, taking four wickets for just 17 runs in his four overs 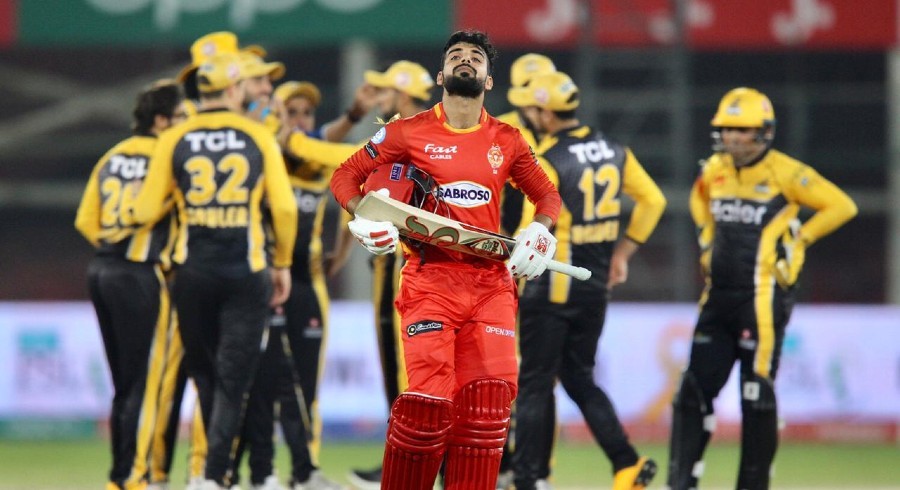 Islamabad United’s strategy of aggressive cricket backfired horribly against Peshawar Zalmi on Saturday as the team was bundled out for a paltry 118 in 17.1 overs by a relentless bowling attack after being put in to bat first at the National Stadium in Karachi.

After winning the toss and opting to field first against Islamabad United, skipper Wahab Riaz dealt the first blow when he removed opener Paul Stirling (one run off two balls) early after the batsman played on and the ball smashed into the stumps.

Batsman Phil Salt (nine off 11) was the next to depart, bowled by pacer Saqib Mehmood. All-rounder Faheem Ashraf (two off four), who has been in scintillating form recently, succumbed to pacer Umaid Asif as he failed to get on top of the bounce of a short delivery and played it into the hands of fielder Tom Kohler-Cadmore.

Shadab Khan came in next with the task of rebuilding the side after the early wickets. The skipper however became a victim of an unfortunate mix-up which resulted in him being run-out by fielder Imamul Haq after scoring just six runs off five balls.

While wickets fell at the other end, opener Alex Hales was his menacing best at the top of the order, hitting boundaries to all parts of the ground. The batsman was finally removed by pacer Saqib Mehmood, caught by substitute fielder Mohammad Imran, after scoring 41 runs off 27 balls.

Batsman Hussain Talat soon followed Hales back to the pavilion after being adjudged LBW off the bowling of spinner Mujeebur Rehman. The appeal was given not-out originally but a review showed the balls hitting the stumps which resulted in a successful review and a reversed decision.

Batsman Iftikhar Ahmed (seven off 12 balls) could not replicate his blistering performance against Karachi Kings and was promptly removed by Wahab Riaz, caught by Tom Kohler.

With wickets falling in heaps, batsman Asif Ali decided to continue playing in an aggressive manner which soon proved to be his downfall. Wahab Riaz removed the hard-hitting batsman, caught by fielder Shoaib Malik, after scoring just 19 runs off 12 balls.

The skipper then removed tailender Hasan Ali (seven off 10 balls), given out LBW. Hasan had reviewed the decision but to no avail, as replays showed the ball was pitching in line, the impact was in line and the ball was crashing into the stumps.

Saqib Mehmood then forced an edge from tailender Mohammad Wasim (one off two), caught by wicketkeeper Kamran Akmal, to restrict Islamabad United to a paltry score of 118 all-out in 17.1 overs.

Wahab Riaz was the pick of the bowlers for Peshawar Zalmi, taking four wickets for just 17 runs in his four overs. Saqib Mehmood took three wickets while Mujeebur Rehman and Umaid Asif picked up a wicket apiece.