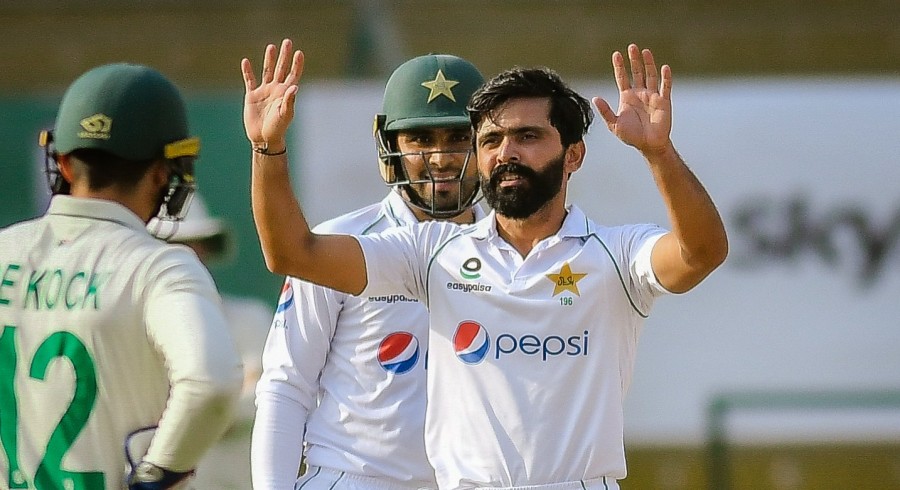 The hometown hero and left-hand batsman Fawad Alam brought up his third Test century to help Pakistan secure a 88-run first innings lead over South Africa, with two wickets still in hand at the end of second day’s play in Karachi.

The Karachi-born batsman dispatched left-arm spinner Keshav Maharaj for a six in the 90th over to reach the three-figure mark in style. His brilliant 109-run knock included two sixes and nine fours.

Pakistan needed their veteran batsmen, Azhar Ali and Fawad Alam, to step up in the morning session on day two as the hosts were still 187 runs behind South Africa’s first innings total.

The duo showed intent from the get go as they relied on quick singles to keep the scoreboard ticking, eventually scoring 36 in 13 overs during the first hour. The luck was on Azhar’s side as a close bat-pad lbw review by South Africa was turned down by third umpire for being inconclusive, thus staying with on-field’s umpire decision of not-out.

Right-arm pacer Kagiso Rabada and Maharaj kept probing the Pakistan batsmen during the majority of the morning session with tight lines. However, Azhar and Fawad were able to take Pakistan to lunch unscathed, while adding 71 runs in the session.

Azhar brought up his fifty after lunch but his stint at the crease came to an end soon as he was caught behind for 51 on the bowling of Maharaj, thus ending the 94-run partnership between the aforementioned duo.

Fawad found an able ally in Mohammad Rizwan, who continued his rich vein of form as he provided much-needed acceleration to the Pakistan innings. The duo completed a fifty-run partnership in 105 balls, before Rizwan was caught at slip by Faf du Plessis for 33. The wicketkeeper-batsman succumbed to Lungi Ngidi, who set him up perfectly by bowling couple of out-swingers before an inswing delivery proved to be his undoing.

All-rounder Faheem Ashraf, the second highest-run scorer for Pakistan in New Zealand, also started from where he left off as he stitched an important 102-run partnership with Fawad. Faheem played his natural game and was not afraid to play the pull shots against South African pacers. The 27-year-old all-rounder completed his third Test fifty in just 69 balls, with the help of 7 fours. Meanwhile, Ngidi was finally rewarded again for continuing with his bowling plan, as Fawad was caught by Bavuma at 109.

Faheem soon followed Fawad to the dressing room as his 64-run knock ended after defending a Yorker from right-arm pacer Anrich Nortje, with the ball dragging onto the stumps.

Lower-order batsman Hasan Ali and Nauman Ali managed to get through to the end of the day’s play without losing their wicket, while adding 13 runs, to take Pakistan’s first innings total to 308 for 8.