David Wiese was the star at the end, hitting 31 runs at a bullet-like pace off just nine balls 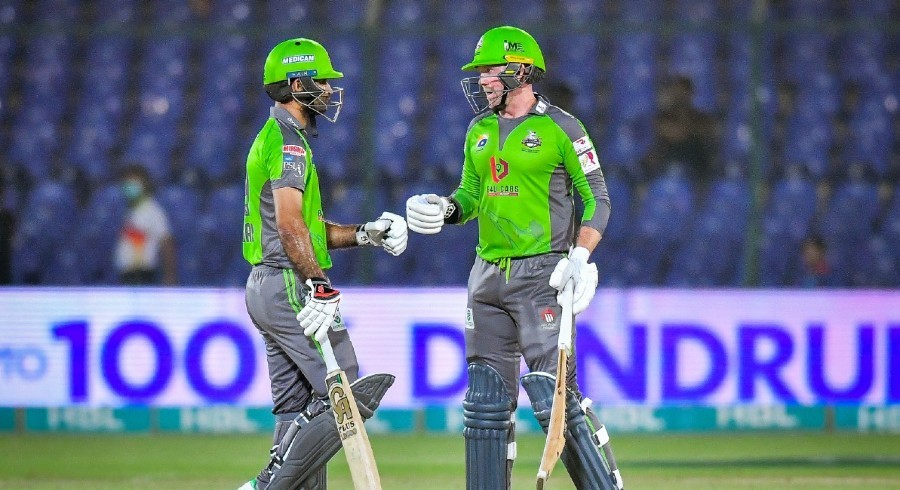 Lahore Qalandars pulled off a thrilling six-wicket victory against Karachi Kings, chasing down a mammoth 187-run target at the National Stadium in Karachi on Sunday.

Chasing a daunting target of 187 runs, Lahore Qalandars were off to a horrible start against a fired-up Karachi Kings side. Skipper Sohail Akhtar was the first to depart, for a duck, after fielder Imad Wasim’s direct hit caught him short running lazily for a single.

Pacer Mohammad Amir then bowled batsman Joe Denly for a golden duck as the Karachi crowd roared for their home side.

Pacer Waqas Maqsood dealt the biggest blow to Lahore Qalandars’ cause when he removed all-rounder Mohammad Hafeez (15 runs off nine balls), caught by fielder Babar Azam, as the side was reduced to 33 runs for the loss of three wickets.

With their side in trouble chasing a massive target, opener Fakhar Zaman and batsman Ben Dunk stepped up for their side. The duo combined for a massive 119-run partnership off just 79 balls to throw the game wide open.

Daniel Christian got the better of Fakhar Zaman as the pressure of the required run-rate intensified towards the end of the innings. The opener had scored 83 runs off 54 balls before being caught by fielder Babar Azam off the bowling of Daniel Christian while attempting to clear the boundary rope.

Batsman Ben Dunk and all-rounder David Wiese however pushed the accelerator on the match with a 37-run partnership to propel their side to a massive six-wicket victory.

Ben Dunk remained not-out after scoring 57 runs off 43 balls while David Wiese was the star at the end, hitting 31 runs at a bullet-like pace off just nine balls to spell doom for the hometown side.

Mohammad Amir, Waqas Maqsood and Daniel Christian picked up one wicket each for the Karachi Kings.

Earlier, opener Sharjeel Khan and all-rounder Mohammad Nabi’s splendid knocks turned the tables around after Lahore Qalandars blew away the top-order of the opposition as Karachi Kings ended with a total of 186 runs for the loss of nine wickets at the end of their allotted overs.

Pacer Shaheen Shah however charged through with a magical in swinger that cleaned up Karachi Kings most prolific batsman Babar Azam (Five off five balls).

Catastrophe struck for Karachi Kings soon after, as their hard-hitting batsman Joe Clarke (four off six balls) was run-out by fielder Haris Rauf.

Pacer Ahmed Daniyal put his side completely on top, bowling batsman Colin Ingram for a golden duck reducing Karachi Kings to 37 runs for the loss of three wickets in the first five overs.

The Sharjeel let-off at the start however came back to haunt the Qalandars as the opener embarked on a rampage that helped him score a quickfire 64-run knock off just 39 balls to guide his side out of a tricky period with a hefty run-rate.

All-rounder David Wiese finally got the batter of Sharjeel, after the partnership between him and all-rounder Nabi had swelled to 76 runs off 44 balls.

Nabi continued the momentum created by Sharjeel with a great display of power-hitting of his own. The all-rounder managed 57 runs off just 35 balls before succumbing to pacer Haris Rauf, caught by fielder Sohail Akhtar. His partnership with all-rounder Daniel Christian accounted for 45 runs off 26 balls as Karachi Kings charged towards a massive total.

All-rounder Samit Patel, who had gone for plenty earlier in the innings, made amends by removing skipper Imad Wasim for a golden duck.

Karachi Kings’ momentum however took a massive hit as all-rounder Daniel Christian, who had appeared to be in sublime form, departed after a horrible mixup with tailender Waqas Maqsood. The batsman had to depart after scoring 27 runs off just 14 balls.

The tailender was then cleaned up by Shaheen Shah in the final over after contributing 12 runs off 11 balls.

Shaheen then blew away Mohammad Amir for a duck as Karachi Kings finished on 186 runs for the loss of nine wickets in their allotted overs.

Shaheen Shah was the pick of the bowlers for Lahore Qalandars picking up three wickets in four overs at the expense of 27 runs.