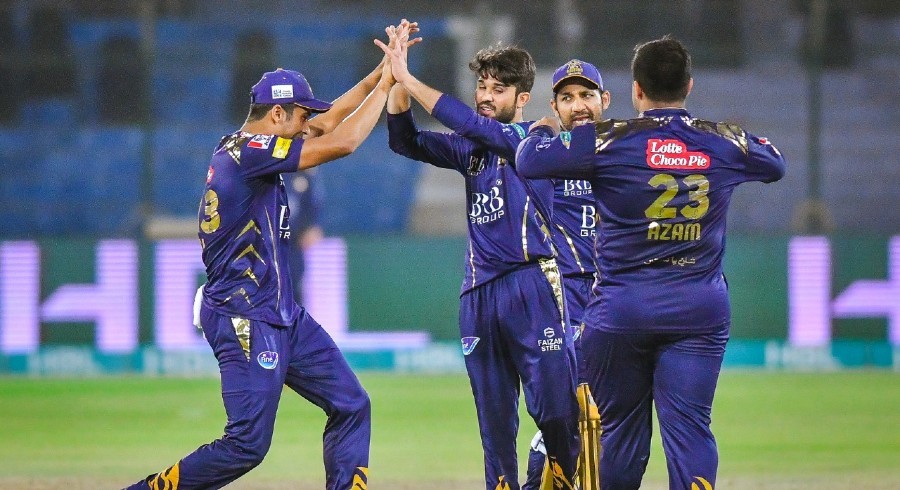 Quetta Gladiators won their first match of the HBL PSL 6 and became the first side in the tournament to win a match after successfully defending a total.

Chasing a daunting target of 177 runs, Multan Sultans were off to a breezy start. Openers Mohammad Rizwan and James Vince combined for a 63-run partnership and it seemed like the trend of unsuccessful defenses would continue as the Sultans appeared on track for an easy victory.

Spinner Qais Ahmed however struck and removed James Vince, caught behind by wicketkeeper Sarfaraz Ahmed, after scoring 24 runs off 21 balls.

The spinner then removed hard-hitting batsman Rille Rossouw as the momentum shifted towards the Gladiators.

All-rounder Mohammad Nawaz got rid of Sohaib Maqsood (two off four balls) as Rizwan began to run out of partners.

Batsman Khushdil Shah (19 off 12 balls)  got a start, as opposed to the earlier batsmen, but could not convert it into a significant score after falling to pacer Mohammad Hasnain, caught by fielder Saim Ayub.

All-rounder Carlos Brathwaite (four off three balls) fell next caught by fielder Ben Cutting off the bowling of Mohammad Hasnain, as the Gladiators tightened their grip on the match.

As the pressure of the required-rate mounted, Mohammad Rizwan was the last hope for the Multan Sultans’ side. The wicketkeeper-batsman finally holed out to fielder Mohammad Hasnain off the bowling of leg-spinner Zahid Mahmood after scoring 66 runs off 50 balls.

Tailender Imran Tahir (14 off eight balls) was run-out while tailender Shahnawaz Dhani was caught by fielder Faf Du Plessis off the bowling of Dale Steyn as Quetta Gladiators completed a much-needed victory in the tournament.

Qais Ahmed took three wickets for his side while Zahid Mahmood and Mohammad Hasnain picked up two wickets each.

Debutant opener Usman Khan sizzled in his first outing of the Habib Bank Limited (HBL) Pakistan Super League (PSL) with an electric knock that propelled Quetta Gladiators to a 176-run total at the National Stadium in Karachi on Wednesday.

After losing the toss and being asked to bat first, Quetta Gladiators were off to a solid start by openers Saim Ayub and Usman Khan. The two youngsters repaid their franchise's faith in them with a steady partnership of 69 runs at the top of the order.

Veteran leg-spinner Imran Tahir finally got the better of Saim Ayub, caught by fielder Khushdil Shah, after he scored 23 runs off 18 balls.

Meanwhile, Usman Khan continued his solid start on the way to an impressive 81-run knock off 50 balls with the help of 10 fours and 3 sixes.

Multan Sultans however struck back. Imran Tahir first removed the debutant Usman Khan, after an ill-advised reverse sweep was adjudged LBW by the umpire, to open the gates for his side.

Pacer Sohail Khan struck in the very next over as he bowled veteran batsman Faf Du Plessis (17 off 17 balls).

In-form batsman Sarfaraz Ahmed quickly fell too as he was bowled by pacer Imran Khan as Multan Sultans put the brakes on the Quetta Gladiators’ momentum.

The hard-hitting Azam Khan was struck in front of the wicket by pacer Shahnawaz Dhani and was adjudged LBW after scoring 17 off nine balls. The batsman reviewed in vain as replays showed the ball crashing into the stumps.

Dhani then struck another blow to the Gladiators’ cause by removing all-rounder Ben Cutting (10 off seven balls), originally given not-out for an LBW appeal, after Multan Sultans successfully reviewed the LBW decision of the umpire.

All-rounder Mohammad Nawaz played an enterprising cameo at the end scoring 20 runs off 10 balls, before being removed by Dhani on the last ball of the innings, to propel his side to a competitive score of 176 runs for the loss of seven wickets in their allotted overs.

Dhani was the pick of the bowlers for Multan Sultans, taking three wickets while Imran Tahir took two wickets.