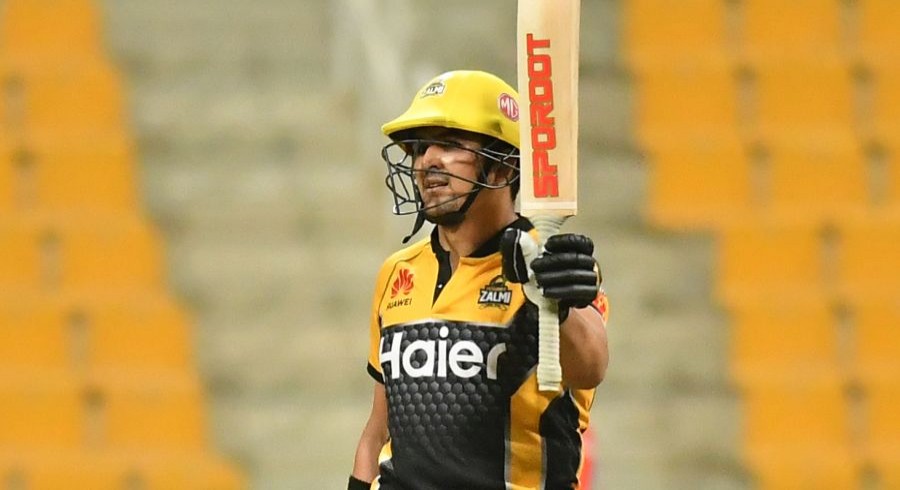 Chasing a target of 176 runs, Zazai decided to charge Mohammad Amir and accumulated 14 runs in his first over.

Zazai also targeted Arshad Iqbal and Mohammad Ilyas, hitting a six each against the local pacers.

Karachi introduced Noor Ahmed early inside the powerplay to stop the flow of runs and the move paid off as he dismissed Kamran Akmal after conceding two boundaries earlier in that over.

The departure of Akmal and the end of powerplay didn’t stop Zazai as he hit Imad Wasim for two boundaries and a six, to bring up his fifty in just 23 balls.

While Zazai continued to attack, Imamul Haq found it difficult to get going and chopped a delivery from Perera onto his stumps.

Despite scoring 37 runs with the bat, Perera’s most vital contribution in the match came when he removed the in-form Zazai, bringing Kings back into the game.

Zalmi needed their most experienced batsman to step up and Shoaib Malik responded by stitching a 52-run partnership with Khalid Usman to take them close to the target.

Amir removed Malik for 30 in the second last over, but it was too late as Rutherford completed the chase in the last over.

Babar started his innings by hitting Wahab Riaz for back to back boundaries in the first over. Sharjeel took inspiration from Babar and also dispatched consecutive boundaries against Mohammad Irfan, to give a perfect start to Kings.

However, Irfan pulled things back for Zalmi as he trapped Sharjeel lbw for 26 before the end of powerplay.

Martin Guptill’s horror-run in the PSL continued as he was caught behind for a duck in the next over.

Babar stitched a 31-run partnership with Danish Aziz and tried to bring Kings’ innings back on track. But, Irfan got rid of Danish for 13 to pick his second wicket of the match.

Babar decided to up the ante in the 13th over as he smashed Mohammad Imran for a hat-trick of boundaries, bringing his fifty in 42 balls.

Wahab returned in the 15th over to remove Babar for 53, further denting Kings’ innings.

Thisara Perera decided to lead the charge after Babar’s departure and smashed two sixes and two fours in Khalid Usman’s final over.

Umaid Asif ended Perera’s 37-run cameo as left-hander was caught at long on while trying to take the aerial route.